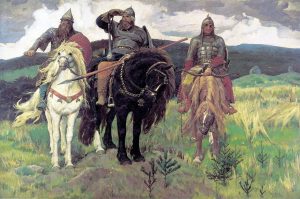 One of the most common quest hooks in fantasy games is for the party to escort a person or item of importance on a journey. It might be a diplomat on her way to sign an important peace treaty, a prince on his way to be betrothed, or even a relic of power being sought by an ancient death cult. When those in power need security, they seek out adventurers to lend their unique skills to the task.

Of course, given how often nobles, politicians, and guilds need to move important cargo, it makes sense that an entity would spring up to serve that need. The entity in question is an organization known as the Iron Horsemen.

Who Are the Iron Horsemen?

The Iron Horsemen are experts in the field of secure travel. Famed for their iron-clad carriages that can withstand heavy assault, fierce horses, and their black-cloaked coachmen, the Iron Horsemen have dedicated their honor, and their reputations, to making sure that what they transport always arrives both safe and sound at its destination.

The organization tends to attract wanderers and wayfarers, and sports its share of woods guides, rangers, and former soldiers who are used to the hardships of a march through hostile terrain. However, part of the purpose of a Horseman’s uniform is to camouflage their skill sets to keep enemies off-guard. The sour-faced coachmen with the bullish shoulders might just be a skull-cracker, but he might also be a druid, capable of summoning the very road to their aid. The whipcord woman riding shotgun might be a former crossbow sergeant, but she might also be a sorcerer with the elemental powers of destruction at her beck and call. The fresh-faced newcomer whose cloak has barely caught any road dust might seem like a pushover, but though his time on the road is short, his skills as an abjurer are unmatched in the whole of the realm.

Why Would Someone Become an Iron Horseman?

There are numerous reasons someone might want to join the Iron Horsemen. First and foremost, the organization has a long reach, and it takes care of its members. That means a steady paycheck, with bonuses for hazardous missions, as well as budgets for travel. Horsemen are also respected professionals, which might be a pleasant change from how some adventurers are treated. Especially when they aren’t flush with plunder from a recently emptied dungeon. Lastly, while escorting cargo for the Horsemen can be dangerous, it’s always safer to be a member of an escort team than it is to travel the road alone, without the protections of their specially-made (and often enchanted) carriages.

The Iron Horsemen in Your World

The Iron Horsemen can be as big, or as small, a part of your campaign world as you want them to be. For example, someone in your adventuring party might be a former Horseman who was let go for unspecified reasons, and is now adventuring because she knows no other trade. If your party acquires expensive loot and wants to ship it somewhere, they might procure the group’s services to ensure it travels safely. In some cases, the party might book passage for themselves with the Horsemen, traveling quickly and safely through the group’s network to get to their destination with minimal stops and problems.

The organization works as a plot hook, too. For example, the Horsemen might approach the party, and ask them to locate a team that went missing. Maybe the shipment was attacked, or maybe the Horsemen guarding it stole the goods, but the organization wants plausible deniability in case something goes wrong. If the party solves the mystery (the cargo was a monster that got away, the escort was killed by bandits who haven’t been able to crack the locks, and so on), then they might be given further work from the organization, eventually becoming full-fledged members. This gives you the advantage of being able to order your party around to different places, and embroil them in conflicts related to the cargo they’re transporting. Do they deliver the kidnapped princess when they discover that’s who they’ve got in the trunk? Or do they attempt to do the right thing, and return her to her family, whether or not that’s the company’s policy?