Skip to content
Home / Delve into the Depths in the Kobold Blog / Inspiring Terrains: Playas (Part 4 of 5) 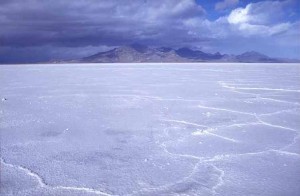 “Inspiring Terrains” looks at encounters—fundamental building blocks that bring together PCs, conflict, and environment. With a little inspiration and a few mechanical bits, it’s easy to make the terrain in an encounter just as memorable as the foes. [Part 1][Part 2][Part 3]

For the fourth installment, we endure the stinging winds of the preternaturally flat playa.

Trapped Water and the Hot Sun

Through a quirk of topography, some of the flattest surfaces in nature occur in the most rugged regions. Mountains and ridges channel water to the lowest points in the basins they surround. Once there, the water has nowhere to go, so it remains, forming lakes which slowly disappear as evaporation and seepage take their toll. The flat expanse of sand and salt left behind in the dry lakebed is known as a playa…

Two features define playas—they are dry and they are flat. Although neither characteristic seems terribly relevant to a group of powerful PCs, all the in-game effects of a lakebed follow from these two qualities. Dryness brings with it evaporated salt and blowing dust, which hamper vision and make potable water sources rare. Flatness leads to difficulty in gauging distance—and, therefore, difficulty navigating, tracking, and determining range to foes.

Eventually, all things on a playa come back to the lack of water and the lack of vertical relief.

Wet or Dry? The sun heats both the flat surface of the playa and the air just above it. Light passing through this heated layer bends in surprising ways, creating the illusion of standing water. These mirages generally disappear when approached, but the large, flat expanses of dry lakebeds provide enough space for the imagined lake to recede indefinitely, tantalizingly just out of reach.

Heat rising from the salt and sand refracts the blinding sunlight, creating the illusion that water fills the lake.

Effect All creatures upon the dry lakebed gain a +5 bonus to Stealth checks as they use the ever-present mirage to their advantage
Usage Ambush attackers—lurkers, other creatures who attack from concealment, or even clever PCs—benefit from the increased ability to hide provided by the camouflage mirage terrain feature

Just Parched. Lakes in merely arid lands evaporate slowly, giving the earth time to interact with the water, the wind, and any indigenous life. The lake leaves behind a mudflat; as the mud gives up its moisture to the dry air above and the parched sands below, it hardens, shrinks, and cracks, leaving behind a field of flat polygons separated by deep cuts. So regular as to suggest sentient creators, these vast fields of regular shapes actually require only slow baking in the sun.

You catch your boots in a deep crack in the dried mud of the lakebed, prematurely bringing yourself to a halt.

Truly Dry. The driest of climates cause shallow, still lakes to evaporate quickly. Winds, currents, and life have no time to disturb the bottom, so the desiccated remains are amazingly, almost preternaturally flat. Acres of packed sand and evaporated salt lie as flat as a sheet of ice floating on a still pond.

Careful balance and subtle shifts of your weight allow you to glide over the hard lakebed like a skater on ice.

Free Action
Requirement
Movement across a perfectly flat lakebed, beginning or passing through a square with this power (may be applied to forced movement, but not to teleportation, flying, or phasing)
Check
An Acrobatics check (hard DC) to glide smoothly over the flat ground
Success Shift 1 square/tier as a free action at the end of the movement

Sunlight, Sunlight, More Sunlight. Flat expanses of white sand and salt combine with the beating sun and the absence of clouds to create a spectacularly bright environment. This surfeit of light can lead to blindness just as quickly as its absence, and desert-dwellers take elaborate precautions to limit the amount of light reaching their eyes. Circumventing these precautions grants an immediate tactical advantage.

You guide a brilliant reflection of the blinding sun directly into your foe’s eyes.

Minor Action
Requirement A bright light source; while the sun is the most common source of light, the full moon, arcane effects, or even a blazing bonfire might also meet this requirement
Check A Dungeoneering check (hard DC) or a Nature check (moderate DC) to reflect the light precisely at the proper angle
Success Bright light shines directly into the eyes of your foe, threatening its vision
Target One creature within 2 squares of the triggering square
Attack Level + 3 vs. Reflex
Hit The target is blinded (save ends)

Entrained with the Rain (Terrain Feature)

The Inevitability of Rain. Running water forms playas, and though every drop of moisture has departed, eventually the rains return. In wetter environs, plant life temporarily traps the rainwater on the surface. In the parched terrain near the playa, though, rare rainfalls lead to powerful flash floods rushing through arroyos to the basin of the playa itself. The water immediately seeps through the dry sands to hidden voids below, leaving behind only suddenly sucking mud.

Rain pours from the skies, but instead of pooling on the saltpan, it passes right through the top layer of earth. The mud it leaves behind attempts to pull anyone standing upon it into the same subterranean reservoir sought by the rushing water

Effect Any creature that does not move between the start of its turn and the start of its next turn is slowed (save ends) (forced movement and teleportation count as movement; creatures which do not touch the ground or which pass freely through the ground are immune to this effect)
First Failed Save—The creature is immobilized (save ends the immobilization, but the creature remains slowed)
Usage The entrained with the rain terrain feature penalizes immobility, so use it with fast creatures that can attack and move: consider adding rocks or other squares lacking this feature to the battleground as points of contention for both sides

Use this boon to reward a player after a series of encounters on the flat expanses of dry playas.

Extensive experience skating on evaporated saltpans has taught you the benefit of even forced motion, and your eyes have grown accustomed to the abuse of sun and salt.

Lvl  3                      680 gp
Terrain Mastery Boon
Property Gain a +2 power bonus to all saving throws you roll to recover from blindness
Power (free; encounter)
If an enemy uses a forced movement effect against you, you can shift 1 square/tier as a free action at the end of the forced movement.

Venture forth onto the arid desolation of the desiccated lakebed!