Skip to content
Home / Delve into the Depths in the Kobold Blog / Inspiring Terrains: Underground Mines (Part 2 of 5) 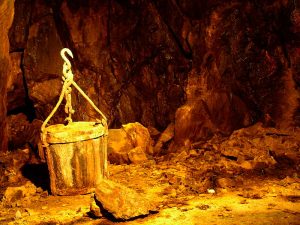 “Inspiring Terrains” looks at encounters—fundamental building blocks that bring together PCs, conflict, and environment. With a little inspiration and a few mechanical bits, it’s easy to make the terrain in an encounter just as memorable as the foes. [Part 1]

Mines have been part of fantasy literature since its earliest days. In the game, though, mines usually feel like little more than renamed dungeons or caves—just another dark, underground environment with a different name…

Real mines—and memorable mines in the game—have an essential nature all their own. Unlike a cave, someone labored to excavate a mine. Unlike a dungeon, desire for a particular ore drove the creator of a mine to wrest stone from the ground. Because of this purposeful, profit-driven construction, mines share several defining characteristics, reflected in the terrain powers below. (Also remember that mines may invoke more familiar aspects of the rules—tight passages require squeezing, the pitch blackness makes light sources vital, and so on.)

Twisting, Cramped Tunnels. Miners scrape away rock with their arms and carry it out on their backs. They follow the ore as it meanders through the surrounding stone. No one bothers with luxuries such as straight, wide, or high passageways. Instead, cramped mine tunnels corkscrew erratically, and miners quickly learn to mind their heads.

Overhanging rocks and sharp corners threaten any creature moving near this surface.

Free Action
Requirement
You must use a power that forces an enemy to move from, to, or through a square adjacent to a wall
Check
Perception check (easy DC) to notice where the walls, ceiling, and floor protrude dangerously
Success
The enemies undergoing forced movement take damage from its rough passage
Target Each enemy undergoing forced movement
Attack
Level + 3 vs. AC
Hit 1d4 + 1/2 level damage

Holding Up the Earth. Tons of rock push down on the holes excavated by miners. Beams and bolts can hold back the patient weight of the earth for a time, but eventually the ground reclaims all mines, collapsing them into impassability.

Fine cracks in the rock and loose debris on the floor tell your trained eye that stress is building within the rock. A well-placed blow to the supports will bring heavy rocks crashing down.

Standard Action
Requirement You must be adjacent to a wall that is held up artificially (by beams, rock bolts, or the like)
Check Dungeoneering check (moderate DC) to collapse the wall
Success Rocks fall from the wall as it collapses
Target Each creature in a close blast 2 in the direction the wall fell
Attack Level + 3 vs. Reflex
Hit 1d6 + 1/2 level damage, and the target is immobilized (save ends)
Miss Half damage
Effect The area of the blast becomes difficult terrain while the rest of the collapsing wall remains in place

The Dust of Toil. Endless chipping and blasting has left the mine covered in a thick layer of gritty dust. Dirt covers the skin, infiltrates packs and armor, and even invades the lungs, giving everyone a dry, hacking cough.

The dust is so sharp and gritty that it feels like tiny knives scraping throats and eyes.

Move Action
Requirement You must be in a square covered in dust (in a mine, every square meets this requirement)
Check Thievery check (moderate DC) to gather a handful of dust and fling it at your foes
Success Blinding dirt flies in the face of one foe
Target One adjacent creature
Attack Level + 3 vs. Fortitude
Hit 1d6 + 1/2 level damage, and the target is blinded until the beginning of its next turn
Miss Half damage

Dug from the Earth. Long sequestered from air and water, many ores corrode unexposed skin or emit dangerous gasses once unearthed. Miners avoid these natural dangers when they can, while canny creatures use them against their foes.

Ochre and vermillion ores eat away at unprotected living tissue.

Move Action
Requirement You must be in a square containing exposed corrosive ore
Check Athletics check (moderate DC) to kick or throw the ore at the intended target
Success Corrosive rock strikes the targeted creature
Target One adjacent creature
Attack Level + 3 vs. Fortitude
Hit 1d8 + 1/2 level acid damage and 5 ongoing acid damage (save ends); if the damage roll is 8, the target is weakened until the end of its next turn
Miss Half damage with no ongoing damage

A familiar smell betrays the presence of flammable gas, ready to ignite if exposed to searing flame.

Free Action
Requirement You must make an attack that deals fire damage in a square containing explosive vapors
Check The attack must inflict fire damage, although it need not hit
Success Flammable vapors ignite in a fierce explosion
Target Each creature in a close burst 3
Attack Level + 3 vs. Reflex
Hit 1d8 + 1/2 level damage, and 5 ongoing fire damage (save ends)
Miss Half damage with no ongoing damage

(The GM may wish to extend the explosion to the entire area filled by the vapors. This has the potential to be a devastating effect on the combat; be sure to mark the affected area before the battle and let intelligent creatures avoid setting off the explosion inadvertently.)

Use this boon to reward a player after a series of encounters in an underground mine.

Your long experience in the cramped quarters of deep mines lets you contort your body. Now you pass easily through areas others find constraining.

Lvl 8                       3,400 gp
Terrain Mastery Boon
Property You treat difficult terrain as if it were normal terrain
Power (minor; daily)
You can squeeze through spaces without the normal penalties to speed and attack rolls, without provoking attacks of opportunity, and without granting combat advantage.