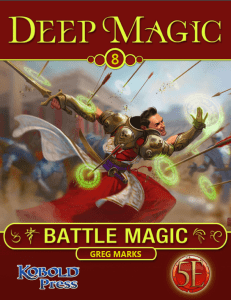 Shape the Battle to your Will!

You combine a talent for magic with a study of the art of war. As a battle mage, you know that fire and lightning can decimate an enemy’s forces; but a well-placed defense, the quick movement of allies, and a curse that crushes the enemy’s will to fight can be even more devastating. Battle magic is not just about killing your enemy: your true power is in controlling the flow of combat.

The wind is rising, and the enemy approaches. They’ve come ready for battle; but what they don’t know is that you are the master of the battlefield…

Get Deep Magic: Battle Magic for 5th edition at the Kobold Store today!