Skip to content
Home / Delve into the Depths in the Kobold Blog / Inspiring Terrains: Snowy Mountain Peaks (Part 1 of 5) 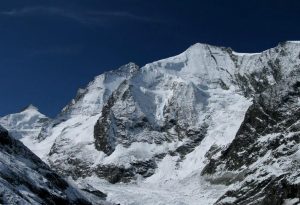 The encounter is our fundamental building block, bringing together PCs, opposition of some sort, and the environment. Although 4th Edition with its emphasis on movement during combat underscores the architecture of locations—defining where the PCs can and cannot move—too often only the color of the battle mat distinguishes one set of surroundings from another. With a little inspiration and a few mechanical bits, it’s easy to make the terrain in an encounter just as memorable as the foes…

Terrain powers are location-based attacks that anyone can use. By changing the palette of attacks available to a PC, these powers make combat on a mountaintop feel very different from combat in a banquet hall. Players pay more attention to the environment around the PCs, engaging more strongly with the game. To use terrain powers most effectively, explain the possibilities to players as combat begins—this gets everyone thinking about the environment from the beginning.

Terrain powers also provide a great opportunity for players to exercise more narrative control over scenes. Even if the GM hasn’t prepared any terrain power options for the encounter, if players come up with reasonable suggestions, let them use it! Combat will remain balanced, because their opponents can use the same powers against them. Letting players get involved in defining their surroundings increases their immersion and their involvement in the game.

Further, this opens the door for alternative rewards, such as the terrain mastery boon. Boons distill the experience a PC has gained by exploring a memorable bit of terrain. Like other alternative rewards, these should be given to characters most engaged with the terrain in question. Give them to the character who used terrain powers most enthusiastically or to the player who dealt or took the most damage from terrain features.

Unlike other alternative rewards, though, terrain mastery boons tie strongly to the actual terrain in question. This makes them somewhat difficult to price, for if the campaign moves from soaring mountaintops to filthy urban alleyways, for instance, the benefits gained through the Steadfast Cragsman boon (below) may be of little use. As a result, rather than always allowing characters to keep their boons for five levels, the GM should replace the boon with a more useful magic item sooner if the campaign evolves to make the boon less valuable.

Through description, terrain powers, and terrain mastery boons, GMs can better bring terrain to life. But now, we climb to the steep, snowy peaks of a towering mountain. Perhaps, your players will reminisce as much about the alpine environment itself as the foes they defeated there.

Mountaintops bring together slick rocks, sharp drops, deep snowdrifts, biting winds, thin air, and blinding sunshine. Each element alone would enhance an encounter; together, their synergy accentuates the essential nature of the mountaintop—its slope. Everything atop the mountain—the rock, the snow, the PCs, and their foes—fights a constant battle against the insistent pull of gravity. No one atop a steep peak ever forgets which way is down.

Out of combat, mountaintops threaten PCs with high or extreme altitude and potentially frigid cold. In combat, features of the environment prove more acutely dangerous.

Steep rock and snow near the summit of the mountain make footing treacherous. Downward slides pose a constant threat.

Setup: Choose part or all of the encounter area to represent a steep slope. This works most easily if the downslope direction lines up with the lines on the battle map. Gravity aids motion down the mountain.

Effect: All movement (with the exception of teleportation and phasing) is doubled in the downslope direction. Movement in the other three directions is unaffected. If a creature moves diagonally, double only the motion in the downslope direction. (In other words, if a creature tries to move two squares down and two squares to one side, it actually moves four squares down and two squares to the side.) The extra downward motion does not count against the movement of the creature.

(Note that Sheer Bank is a terrain effect, not a terrain power.)

Deceptive Footing: To the untrained eye, all fields of snow look alike. Mountaineers, though, know that the thin air and strong sunlight often combine to harden the top layer of the snow. While this makes normal movement easier, as climbers do not have to pull their legs from the snow with each step, once the top crust is breached, the climber sinks into the soft snow below. Because this terrain feature is difficult to spot, you may require a Nature check (moderate DC) to notice it.

The strong top layer of this snowpack is thin. A focused blow would break through it to the loose snow below.

Move Action
Requirement:
You must be adjacent to a square containing loose snow capped with a hard top layer (most snowy mountaintop squares meet this requirement)
Check:
Athletics check (moderate DC) to kick or punch through the top layer of snow
Success:
Your foe sinks into a deep snowdrift
Target:
One creature
Attack: Level + 3 vs. Reflex
Hit: 1d4 + 1/2 level damage, and the target is immobilized (save ends)
Miss: Half damage.
Enveloped from Above: The blowing wind pushes snow into cornices, overhangs which can give way underfoot or collapse onto unwary climbers; similarly, a sudden breeze or a sharp blow can clear snow-laden boughs of mountain trees, leaving those below buried in powder and firn

A thick layer of snow sits uneasily above the battlefield.

Standard Action
Requirement: You must be adjacent to a square with overhanging snow (in a cornice, in the boughs of a tree, or the like)
Check: Perception check (moderate DC) to find the weak point in the overhang
Success: A thick blanket of snow crashes to the slope below
Target: Each creature in the square
Attack: Level + 4 vs. AC
Hit: 1d6 + 1/2 level damage, and the target is blinded until the end of its next turn
Miss: The target is blinded until the end of its next turn but takes no damage
Look Out Below: All mountaineers know the danger of avalanches. Heavy snow perched on sheer slopes await only a trigger to crash downhill, crushing everything in its path; although large slab avalanches are powerful enough to demand encounters designed around them, loose snow on the steepest of slopes can slump downward in more localized flows

Unpacked snow balances precariously on steep, slick rock. A loud noise or the correct pressure would send it careening downhill.

Standard Action
Requirement: You must be adjacent to a square that contains loose snow on a slope, or you must be able to make a sonic attack that targets that square
Check: Nature check (moderate DC) for an adjacent square, or the attack must inflict sonic damage, whether it hits (the square’s defenses are level + 5) or not
Success: The top layer of snow begins to slide down the hill, burying everything in its path
Target: Each creature in a close blast 3 down the slope from the initiating square
Attack: Level + 3 vs. Fortitude
Hit: 1d10 + 1/2 level damage, and the target is knocked prone
Miss: Half damage

Use this boon to reward a player after a series of encounters on snow-covered mountain summits.

Hard-earned lessons have toughened your body against cold and have taught you how to brace yourself against falling snow and inadvertent slips.

Lvl 8                       3,400 gp
Terrain Mastery Boon
Property: If an enemy uses a forced movement effect against you, you can reduce the distance you are moved by 2
Power (Daily): Immediate Interrupt
Trigger—You take cold damage
Effect—Reduce the damage you take by 8

Adventure awaits amidst the icy cornices and sharp rocks of the mountain summits!