Skip to content
Home / Delve into the Depths in the Kobold Blog / Inside the Kobold Mines: A Conversation with Matt Corley 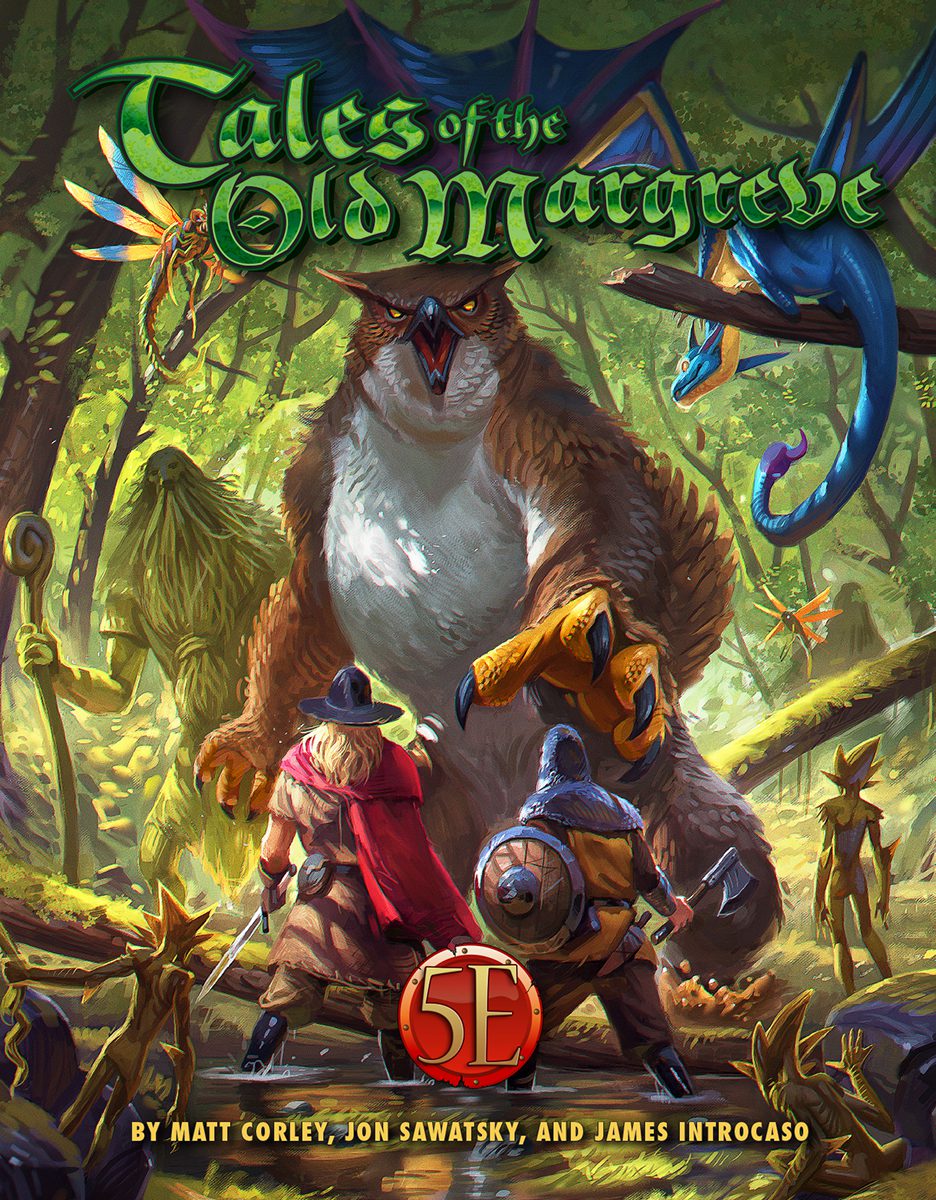 Midgard is my favorite campaign setting, and Tales of the Old Margreve is poised to be my favorite campaign book. Quite apart from my own contributions to the Player’s Guide—about which, more in a later article—I was able to playtest a lot of this in my own Midgard campaign, and it’s just deliciously chock-full of content, from a detailed campaign setting to a host of incredible adventures. With the release of Tales of the Old Margreve right around the corner, I chatted with lead designer Matt Corley about this fantastic project, how he came to be involved with it, and how we both see the vast, leafy green intelligence that is the Old Margreve.

Into the Deepwoods: An Interview with Tales of the Old Margreve Lead Designer Matt Corley

Lou: So… I can’t think of a time I’ve been more excited for a project than Tales of the Old Margreve. There really isn’t anything like it. In my mind, the Margreve is Mirkwood on steroids. But how would you characterize it?

Matt: Grimm’s fairy tales and the Black Forest come to life. I’m so happy with it. The original book is classic, and to be able to bring it to 5E is literally a dream come true. The Margreve is full of firsts for me:

I still can’t quite believe that Wolfgang gave me the chance. I wondered for a while if he thought I was a different Matt.

Lou: Well, that begs the question question—why did he?

Matt: I like to believe that he saw the short encounter that I wrote for Scott for the Kobold Press blog, and I just happened to ask at the right time. Sometimes that’s all it takes. Asking a question and seeing what happens. The worst you can get is a no, which is where you are if you don’t ask.

Lou: Wow. So you went from that to this with nothing in between?

Matt: I wrote professionally for a nationally syndicated Brazilian jiu jitsu magazine for about three years, but sort of kind of, yes? I offered to convert “The Hollow” for the blog, and it blossomed from there. I was asked to do things, and I did them. I never missed a deadline; I never ignored an email. I treated this job like I do my day job. And that paid off enormously.

Lou: Oh, and you wrote the Rogue’s Gallery piece on the Kobold blog, Ga’rok Tok. He was a brilliant villain. That was when you and I started talking, right?

Matt: It was. And that may actually have been what Wolfgang saw too, now that I think about it. It was one of their most shared/popular posts. At least at the time. I love writing characters and NPCs, but it’s also very hard for me. Ga’rok and Eagehrt, from Vengeful Heart, are two of my favorite creations. For Eagehrt especially, I wanted the players and GM to hate him.

Lou: Ga’rok Tok rocks! We added him to our Southlands campaign. But to get back on message, what is your favorite part of Tales? It was working with me, right?

Matt: It was definitely one of the highlights.

Lou: I asked one of my players, “When you think of the adventures that we have played in the Margreve forest, what do you think is the defining tone that sets it apart from other sessions?” He said, “I think it’s the fairy tale atmosphere. I’ve never played in a game like that.” What do you think?

Matt: The stories and feel of Tales of the Old Margreve definitely harkens back to an era of storytelling and folklore older than what many RPGs use as their point of reference. I really liked how ancient and alien the forest itself is. It’s very Lovecraftian.

Lou: Lovecraftian? Do you think the forest is evil? It can certainly be hostile although it does reward players for a lot of good deeds they could potential do.

Matt: “Alien in its motivations, actions, and perspective” would be more accurate. I wouldn’t say it’s innately evil at all. But it’s definitely selfish from the sense that it will do what it must to survive and pursue its own goals. I don’t think it’s wrong to think of it as a body and then take that analogy as far as you’d like. Your player that said “fairy tale” definitely has the right idea, just not the Disney version of a fairy tale.

Lou: Well, maybe the forest in Snow White. Do you have a favorite part of the book?

Matt: That’s tough! You’re asking me to choose between my babies!

Matt: Since I have two daughters, you will get two answers: “The Vengeful Heart” and the encounter tables.

Lou: Oh yeah, those encounter tables are awesome. My group, as you know, is midway through “The Vengeful Heart,” and it is incredible! [Note: We finished it after the interview, and it was phenomenal! Also, we had our first PC death.]

Matt: I think that something folks need to realize with Tales is that while it’s technically a conversion of old adventures, there’s much more new content that old. There are more links and sinews holding them together too for GMs that want to make it a sandbox style campaign.

Lou: So much new. I have the Pathfinder version. This is greatly expanded and lavishly illustrated. The art is beautiful.

Matt: The art is amazing. One way to think of it is to remember that a lot of the original book was Pathfinder statblocks and creatures already in Tome of Beasts or Creature Codex. We kept the duplicates to a bare minimum and converted everything to the more succinct 5e statblock. And in doing so, that 111-page book is now two books with more than 250 pages.

Lou: And there’s some amazing contributors: Wolfgang Baur, of course, and James Introcaso, Ben McFarland, Jon Sawatsky… and what a coup getting Dennis Sustare!

Matt: They’re all very talented, and having Dennis write a druid subclass in the Player’s Guide was tremendous. He’s the guy that actually created the first druid class in AD&D.

Lou: It’s such a fantastic product. The Bluebell Coaching Inn is worth the price alone. And that’s just one small part.

Matt: The one thing that I’ve tried to use in my own Margreve games is that the forest is an integral part of the story. It moves, breathes, and interacts as much or as little as it wants to, and any time I heard a player say something like, “I wish I could just fireball here, but there are too many trees,” I felt like I did my job reminding them who’s really running the show so to speak.

Lou: Well, the forest is old, and ancient…

Matt Corley is the Lead designer of Tales of the Old Margreve and Deep Magic: Combat Divination (Kobold Press), Ghoul Island (Petersen Games), and Lamp’s Light Sanitarium (self-published). He is currently working on a several secret projects with Kobold Press and Petersen Games. Follow him on Facebook and on Twitter: @matthewdcorley