Skip to content
Home / Delve into the Depths in the Kobold Blog / Inside the Kobold Mines: A Conversation with Richard Pett 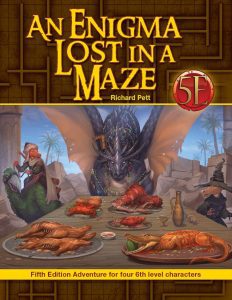 It’s no secret that I’m a huge fan of the Southlands. And one of my favorite designers for that setting is Richard Pett. Now he’s back with a new one, An Enigma Lost in a Maze. In it, characters are sent into the insane maze in the ruins of the city of Roshgazi. Roshgazi was of course the heart of the Moon Kingdom of Tes-Qamar until it was sacked three hundred years ago by the Mharoti empire. Now the maze’s madness has grown to such an extreme that minotaurs in the city are being driven out of their minds. They appeal to the players to brave the journey into the labyrinth and heal the Heart of Roshgazi, but a dragon named Nacissa has come to the city with an army of kobolds, and she seeks the heart as well. Or she kind of does. Maybe she just wants to be entertained and well fed. An Enigma Lost in a Maze is a delve into the First Labyrinth, the world maze where all mazes connect, so it’s natural that, as with everything Richard Pett pens, it’s going to be anything but straightforward. And it’s going to be a lot of fun. I caught up with Richard for a chat about Enigma, the Southlands, Midgard, and maybe a touch of David Bowie.

Lou Anders: It just so happens you wrote the first Midgard adventure that I ever played. My group’s introduction to Midgard was Cat and Mouse. We were down a frequently absent player over a winter break, and I was looking for a one-shot to keep all that holiday time from going to waste. The rest of us ran through it and fell absolutely in love. We ended up playing in the Southlands for months after that and went nearly a year before I could drag them back to finish our other campaign. It was our first urban adventure, and we all loved the way that there are so many NPCs with competing agendas. It’s certainly possible to fight your way through every interaction, but you can probably talk, threaten, beg, or bribe your way through them too. And An Enigma Lost in a Maze is no different. I think this is a staple of your work. Would you agree?

Richard Pett: That’s great to hear. Thank you. Introducing anyone to the Southlands is my absolute pleasure. I’ve been lucky enough to be involved in the setting from early on. I have a very soft spot for Per Bastet, in particular, as it reminds me of Fes in Morocco, which is a place I’ve been lucky enough to spend some time, so in many ways, whenever I’m writing about the City of the Everlasting Cat, I’m actually taking another trip back to that amazing, chaotic, ancient city—in my mind at least. I love Midgard too, by the way, if that’s not already apparent enough. Yes, I agree wholeheartedly, and it is very deliberate for a particular style. When people are kind enough to spend their hard-earned cash on something I’ve written, I obviously want to give them the maximum return I possibly can, so having something that can run for every eventuality and style of play is something I always strive for. It’s always great when people say at conventions or online how a particular adventure went for them—perhaps multiple times if they GM it—and how different groups approach it in different ways. Having grayer NPCs with wider motivations helps with that, and if I can provide NPCs that could actually populate GMs’ own future adventures, that’s particularly enjoyable.

Lou Anders: With Enigma too, you get to play with one of the big history pieces from the Midgard Worldbook, specifically healing the maze in the ruins of Roshgazi and potentially aiding the time-lost minotaur Senator Evadne. I’m curious what happens behind the scenes when an adventure factors into a big piece of the lore. How did this story come about? Is it something you wanted to play with or did the Kobolds come to you?

Richard Pett: Ah, that’s the wonderful Wolfgang! He made some suggestions about where he’d like an adventure to take place, and then I just let my imagination run with it. Kobolds were an obvious choice as Wolfgang is their world chief, and I know he has a soft spot for them. The chance to run some intimate, ongoing roleplay with kobolds (which I’d last done in the Dungeon Magazine adventure “Devil Box” a long, long time ago) was greatly appealing, but of course, kobolds are pretty weak, so having a truly troublesome ally seemed a good way to go forward.

Lou Anders: Speaking of troublesome allies, Nacissa the dragon is wonderful! Where did she come from? In you, I mean. Also, I love the way the two aspects of the insane maze, Broken and Poet, appear and speak to the party. It reminded me a bit of the way David Bowie’s face is hidden throughout the landscape in Labyrinth. Were you thinking of that at all? Although I suppose Broken and Poet should be minotaur faces, shouldn’t they?

Richard Pett: Ah, now you know I’m a massive Bowie fan, Lou. My secret’s out. That’s all just an example, though, of a very cool throwaway idea from the genius Wolfgang Baur. (The whole Poet/Broken thing, of course, is just a page or so in a book with 300 extremely beautiful pages.) I honestly could spend years writing stuff for the Southlands. It’s teeming with spiffingness!

As for Nacissa, she was originally called Nacissistia but was shortened in edits. I have no idea where she came from. I guess from the whole kobold dragonkin thing, the setting (which was destroyed by dragons 300 years before), and—you know what?—I don’t do dragons that often and felt like I should go with one for a change. I love her. I really do love her. It’s so great when an NPC makes you smile with possibilities.

Lou Anders: Ah, massive Bowie fan here as well. (I caught the David Bowie IS exhibition in Chicago and got to see the Goblin King costume firsthand too.) I love too that Enigma can be run as a followup to the Warlock Lairs “Mad Maze of the Moon Kingdom” by Richard Green, and of course, it also has a reoccurring character from your own Grimalkin. I think part of not doing a “kill everything” dungeon crawl is you get these wonderful reoccurring NPCs that give a setting a sense of life beyond the immediate map.

Richard Pett: Good to hear, Lou. He’s been around me all my life. I can remember old top of the pops shows in the 70s and thinking, “Who is this crazy man?” I bet that was great. So sad he’s gone, but I’m still finding stuff in his back catalogue. Hey, I’ve not read “Mad Maze of the Moon Kingdom” yet. Richard is a great writer—and that’s a cool tie in!

Lou Anders: So is the face of Broken and Poet a human face or a minotaur one?

Richard Pett: Oooo, good question, but got to be minotaur although Broken is mad…

Lou Anders: I confess I pressed on that question because I think I’m going to have to make terrain for this. Which brings me to my next question: there are some lovely maps in this adventure, but with the way it’s structured and with the mad maze moving things around and reconfiguring itself, a GM could keep this really loose and open, couldn’t they? I mean, you can just play the mazes exactly as they’re mapped, using the encounters that you detail, or you could throw it up in the air and pull all sorts of things in to it that Broken has snatched from other mazes around Midgard, right?

Richard Pett: Exactly! It could be a dungeon feast, and it could, of course, resurface in future adventures with the PCs suddenly whisked away. This is one where if a GM has a maze or dungeon they want to throw into the mix—or LOTS—they could. I need to see pictures of that terrain.

Lou Anders: It is a great feature of the adventure, which somehow manages to be really rich and packed full of ideas while at the same time lending itself to customization. I think we’ve managed to chat without spoilers! Care to hint at what you’re working on now?

Richard Pett: I’d be delighted. I’m going to self-publish, for the first time ever, an adventure called Crooksmile, set in a very creepy pleasure pier in a place called Between, which I’ve used in writing and gaming before—basically a bloated caricature of reality. It’s very dark and full horror. I’m just doing final edits, and then it goes to Meagan. Should be out early summer. I’m very excited about it. It’s the first time I’ve done this, and I’ve lots of ideas if it takes off.

I’ve just also finished a novel called Goblins! The Adventure of the Wise Wench, which is a funny fantasy about a woman who knows everything and is never wrong (the Wise Wench herself) and a goblin king who thinks he’s in charge and never mistaken. Great fun! In fact, I did a live reading yesterday at a local book festival. It was great to jump out of my comfort zone.

Oh, and I’m working on a card game with the working title of Farmyard Alien Invasion that could be really great fun… lots of alien chickens from beyond, goats from space. It’s brill!