Skip to content
Home / Delve into the Depths in the Kobold Blog / Expanding Codex: Leonino 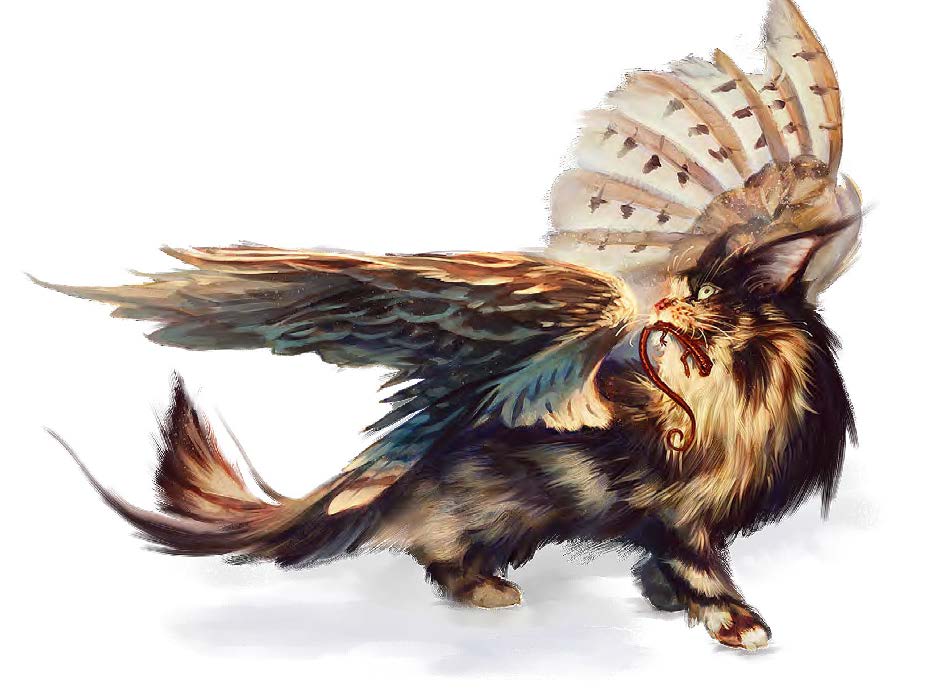 The following changes allow GMs to alter a leonino without modifying its challenge rating:

Favored Messenger. While the leonino is delivering a message, it has advantage on saving throws against spells and other magical effects.

Resplendent Wings. The leonino’s wings are vibrantly colored, and it has advantage on Charisma (Persuasion) checks against creatures that can see its wings.

Rodentsense. The leonino can detect the presence of rats and other rodents within 30 feet. This allows it to sense a shapeshifting creature that has at least one rodent-like form (such as a wererat), even if the creature is not in that form. Additionally, the leonino has advantage on Wisdom (Survival) checks to track rodents.

The leonino does not possess darkvision.

Bite. Melee Weapon Attack. +5 to hit, reach 5 ft., on target. Hit: 5 (1d4 + 3) slashing damage. The leonino grabs the target. If the target is a Tiny or smaller creature, it is grappled (escape DC 10). Until this grapple ends, the target is restrained. A larger creature is not grappled, and it can use an action to remove the leonino with a Strength (Athletics) or Dexterity (Acrobatics) check at the same DC. While the leonino has its target grabbed, it deals 5 (1d4 + 3) slashing damage with its rear claws.

The following magic item and spells are inspired by a leonino’s abilities:

This cloak works similarly to wings of flying, but using an action to speak its command word transforms the cloak into a pair of leonino wings. The wings give you a flying speed of 50 feet, and you have advantage on Dexterity (Stealth) checks made while flying in forests and urban settings. Additionally, when you fly out of an enemy’s reach, you don’t provoke opportunity attacks.

This spell causes the creature that you touch to project an air of detachment in all its social dealings. All other creatures that attempt to make Wisdom (Insight) checks to determine the target’s intentions have disadvantage on those checks.

Casting Time: 1 reaction, which you take when you are subject to a spell or effect that allows you to make a Dexterity saving throw to take half damage
Range: Self
Components: S
Duration: Instantaneous

Upon casting this spell, you gain an innate sense of how to avoid the worst of a damaging spell or effect. If you succeed on the Dexterity saving throw, you take no damage. You only take half damage if you fail the saving throw.

You mark a creature you can see as an enemy to cats. The creature must succeed on a Charisma saving throw, or felines become hostile toward the creature for the duration. Felines have advantage on Wisdom (Perception) checks against the target, and they have advantage on saving throws against effects that would cause them to become frightened of the target. Felines always attack the target in preference to all other creatures, but will not risk their lives to reach the target.

If you can see the target and a feline in combat, you can end the spell, and the feline has advantage on its attack rolls until combat ends. This does not compel the feline to continue fighting the target.