Nobody expects to fight a psychic derro fetus in a cage. 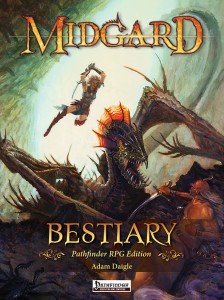 Paizo’s newest developer Adam Daigle has unleashed the beast! Midgard Bestiary:  Pathfinder RPG Edition is out today, with 100 entries – 50  new monsters and new art, plus 50 favorites from the last five years of Kobold Quarterly and Open Design, updated for the Pathfinder Roleplaying Game. First the AGE Bestiary, and now Pathfinder. Is any RPG safe from the kobolds? (Spoiler: no.)

You’ll find Foes from the Free City of Zobeck, the empire of the ghouls, the courts of the shadow and river fey, the Old Margreve forest, and the Ironcrags. Use them in the Midgard campaign setting, Golarion, your own campaign world, or any other fantasy setting.

In its pages you’ll find:

You can grab the Midgard Bestiary for Pathfinder at the Kobold Store. As a sneak preview, here’s one of the new monsters you’ll find in its pages — the kot bayun:

This oddly colored cat appears at first to be a powerful panther. Its wide mouth pulled up into what resembles a grin and its knowing eyes hint at intelligence beyond mere predator.

SPECIAL ABILITIES
Slumbering Song (Su) The kot bayun can put creatures to sleep with its haunting melody. While a kot bayun sings, it can target one hearing creature within a 300-ft. spread. This target must succeed on a DC 18 Will save (Cha-based) or fall asleep. Each round the kot bayun maintains its song, it can select a new target. A creature that successfully saves is not subject to the same kot bayun’s song for 24 hours. This effect even affects elves although they receive a +4 bonus to the Will save. This is a sonic mind-affecting effect.

Folk Cure (Su) A kot bayun’s tales can remove the following condition: blinded, deafened, exhausted, fatigued, nauseated, or sickened. Its stories can even remove disease 1/week. The creature must designate one listener to benefit from its ability, and that listener must spend 1 uninterrupted hour listening to the tales. The creature is reluctant to share this benefit and must be bargained with or dominated to receive the boon.

Enemies of elves and blink dogs, kot bayuns are magical hunting cats gifted with eloquent speech and cunning abilities. These brutal and temperamental creatures get along well with cruel-minded fey. More gentle fey rightfully find the creatures to be a menace. A kot bayun measures 6 ft. long and weighs over 200 lb. It is unknown how long the creatures live although some stories record the same kot bayun in a region for over 400 years.

In addition to their stealthy natures and physical prowess, kot bayun have the ability to put prey to sleep with song. They carefully choose victims and stalk them for a time, learning their strengths and weaknesses before making their attack. They lay in wait until their prey is vulnerable and then begin their slumbering song. Those resisting the call to slumber are always the kot bayun’s first victims as they launch from cover and attempt to disembowel their prey. In forests with a thick canopy, a kot bayun stealthily creeps among tree limbs, climbing with ease as it tracks movement of its prey below.

If discovered by intelligent prey, a kot bayun opens with a parley instead of claws. In rare cases, a kot bayun finds something in its prey it likes and cold predation turns to a lukewarm association. Befriending a kot bayun has benefits as the creature’s poems, tales, and sagas have the magical ability to heal negative conditions. A kot bayun tells its stories in the form of strange epics and poetry, ranging from simple rhyming folk poems to complex sonnets. This ability is widely unknown (and a secret the creatures intend to keep), however, as folktales spread more and more adventurers and sages seek out this elusive beast.