Skip to content
Home / Delve into the Depths in the Kobold Blog / In Praise of External Limitations:Map Talk with Ralf Schemmann

Ralf Schemmann is a designer for ProFantasy Software Limited. Currently, he works on “styles” for Campaign Cartographer. He is also a web designer and freelance cartographer with a love for classical fantasy campaign maps.

“The guidelines I use are generally very loose, since maps vary so wildly,” said Schemmann. “The most important one is probably be aware of the map’s purpose. It’s easy to get carried away and place lots of detail on a campaign map that will only be printed on a single page. No one would be able to read it!”

This short interview is part of an ongoing series on RPG cartography.

Jones: What should a good map do?
Schemmann:
A map needs to fulfill its purpose. That’s the basic thing. Is it supposed to be a work of art? Then it needs to look good, be innovative and visually balanced.

Is it supposed to show the way to a location? Then it needs to be clear and unambiguous. Beauty is a secondary concern, but it often comes naturally if the map serves its function well.

For maps of imaginary lands I always consider a second point though: How convincing is the map? Can I imagine that it depicts an actually existing place?

Jones: Do you apply knowledge of real world geography and geology to your fantasy maps?
Schemmann:
Definitely. This ties into the previous question. The map of an imagined place needs to convince the readers of its existence, to suspend their disbelief. And the easiest way to do that is to refer to things we know from the real world. Rivers run toward the sea, it gets colder as you go north, cities are located on important trade routes, vegetation is affected by prevailing winds, and so on.

If a map breaks these things we “know” from real life, it damn well needs a good reason to. Readers will latch onto that fact and ask questions about it. Why does this city sit in the middle of gigantic desert, with no river near? If the cartographer’s answer is “Uh oh, I didn’t think of that!” either he or the original world designer hasn’t done his job.

Here’s the campaign map for the game that I currently GM: 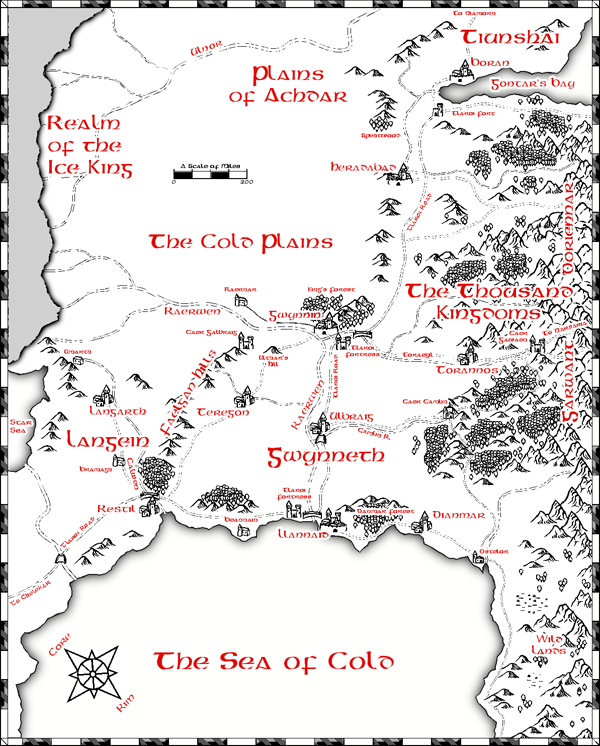 And here’s a battle map I did for ProFantasy Annual subscription: 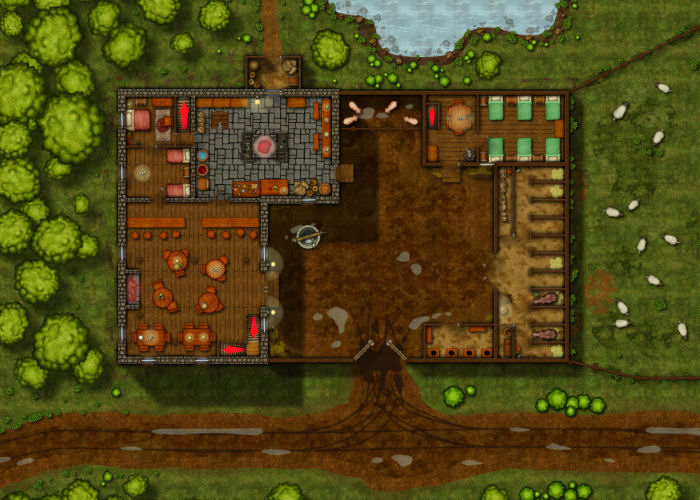 Jones: What part of the process do you focus on at ProFantasy?
Schemmann:
What I most often do is design map “styles”, i.e. sets of tools in Campaign Cartographer that allow people to draw maps of a certain visual style. These can vary wildly, as you can see in these two examples:

This process is a lot of fun. Occasionally, I even get to collaborate with other map-makers, taking their graphics style and converting it into a drawing style for Campaign Cartographer. For instance, the first example above is a style based on work done by Pär Lindström in Adobe Photoshop.

Of course, I have more freedom when I design something from scratch, but having limitations can be fruitful. You meet challenges and need to overcome them with the tools at your disposal. This still lets me discover new techniques in the tools I’ve used for years. If you don’t have external limitations, you tend to stick with the stuff you already know. Variety is nice. Be it sailing ships or planetary systems, almost anything goes and is fun to do:

Although if pressed, I’d probably still have to admit that my heart belongs to the classical fantasy campaign map. It’s simply the type of map my map-making career started with.

Jones: Advice for amateur cartographers?
Schemmann: Take your time. Start small. Try out many different tools and styles until you find something that you’re comfortable with. Stick with that, and develop your own style from it. And probably most importantly: Look at real-world maps. A lot. There are so many wonderful maps around that you’re bound to find some inspiration.

One of the best books on cartography – especially if you want visual references – I’ve come across is The Mapmaker’s Art by John Goss. It contains some stunning images of ancient, medieval and early-modern maps.

Any university or college library should have some standard works on cartography and map-making. Check them out.

Search a bit, and you will find tons of material waiting for you. But anyone interested in drawing his or her own maps should check out the Cartographer’s Guild forum. It’s a very active community without a focus on a specific set of tools.

For our own software, you can’t go wrong with our community forum. It’s a very friendly and helpful place. And we developers hang out there, too.

See the astonishing Canton map by Jonathan Roberts in Dwarves of the Ironcrags, now available from the Kobold Quarterly Store.

4 thoughts on “In Praise of External Limitations:<br />Map Talk with Ralf Schemmann”