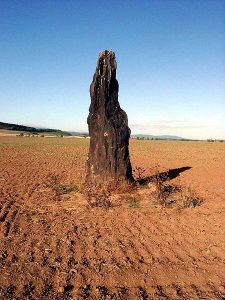 Notable for the soft humming it emits, a magnet stone is a polarized black mineral that has been handy to alchemists, invaluable to city defense planners, and lethal to countless adventurers. While it occurs naturally in veins beneath the mountains of the realm, magnet stones are most often encountered as jagged, obelisk-shaped stalagmites that form after centuries of attracting metallic dust and detritus. Oozes and other mindless denizens flock to sites where magnet stones are common; feeding on both the organic and inorganic matter the hazard has collected.

Skeletons encased in rusting armor cling to an obelisk of dark stone, as if grabbed by an unseen force…

Hazard A magnet stone stands in a single square, pulling all nearby metals toward it

Trigger When a creature wielding a metal weapon or wearing heavy armor moves within 3 squares of the magnet stone, it rolls initiative; on its turn, the magnet stone uses each of its two attacks

Attack (Snatch Weapon)
Standard Action           Close burst 3
Target Creatures wielding a metal weapon
Attack Level + 3 vs. Fortitude
Hit The target’s weapon is pulled into the magnet stone’s square and is stuck; a creature adjacent to the magnet stone can attempt to free a stuck weapon with a DC 15 + 1/2 level Athletics check

In spite of its potency as a reagent and its efficacy in bolstering stronghold defenses, magnet stone is a scarce mineral that poses many risks to those that seek to cultivate it. Thus, to the dismay of many dungeoneers, it is most commonly used by savage humanoids and tomb lords to construct deadly and macabre traps.

On their own, obelisks of magnet stone are perilous, snatching away the weapons of adventurers and trapping those who wear heavy armors such as plate mail. Duergar are said to be particularly fond of attaching poisoned spikes to magnet stone obelisks, and kobolds are known to dig pits around their edges to maim adventurers, leaving their equipment and valuables clinging safely to the stone.

Hidden crypts, nefarious for the tricks and traps they conceal, are another environment where magnet stones are encountered. Flattened sheets of the rock might be attached to sliding plates high in the ceiling, disarming intruders and leaving them vulnerable to the temple guardians below. These plates are occasionally coated in a substance that corrodes even the finest weapons and armor (item must make a saving throw with a +1 bonus per tier or be dissolved to residuum equal to 1/5 the item’s gp value). Plates of magnet stone set into the walls or floor might be electrified (Level + 5 vs. Fortitude; normal medium lightning damage), and especially potent magnet stones may be hidden behind spheres of annihilation, pulling nearby adventurers toward obliteration.

While such traps are terrifying, to say the least, perhaps most fearsome of all is the rolling boulder hewn from magnet stone. Like other traps of its kind, the rolling magnet stone boulder thunders down narrow corridors, mercilessly crushing anything and anyone in its path (Level + 5 vs. Reflex; limited high damage; miss half). However, the boulder’s magnetism slows and pulls those who try to flee, making their escape much more difficult, if not outright impossible.

There’s a very special magnet stone hidden in the comments section below. It’s pulling the very comments from your mind.