Skip to content
Home / Delve into the Depths in the Kobold Blog / Expanding Codex: Iron Sphere 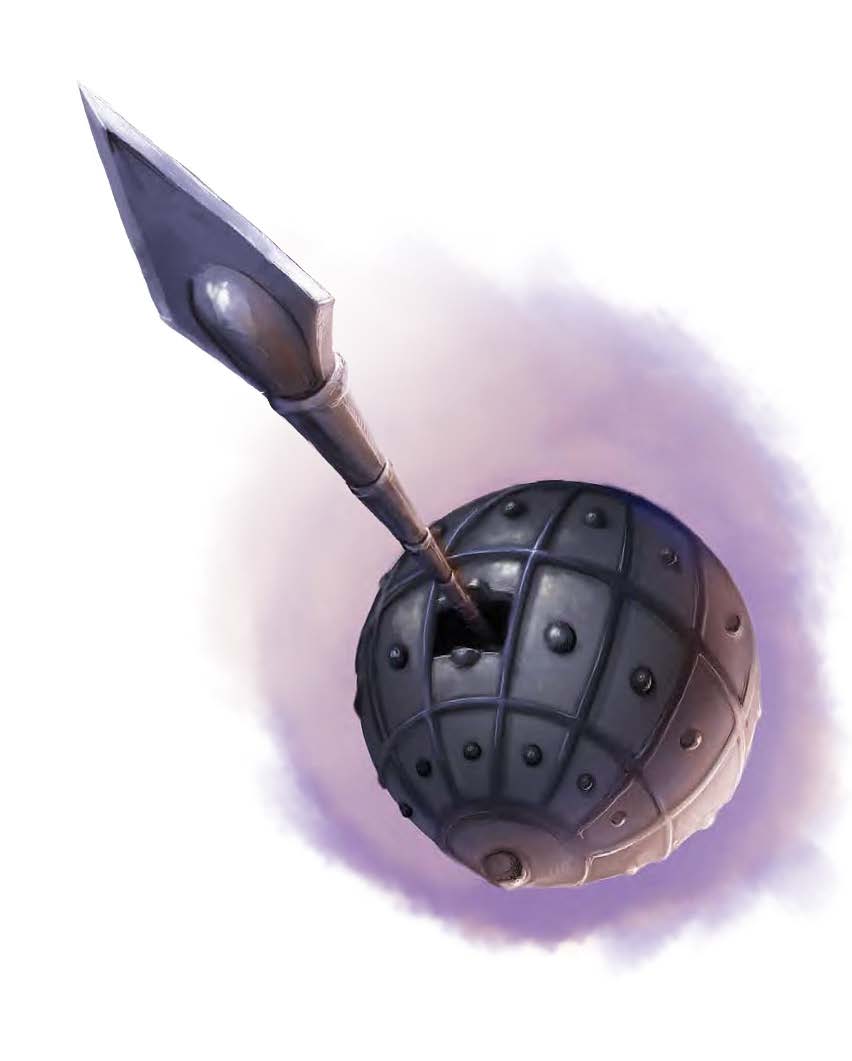 The following changes allow GMs to alter an iron sphere without modifying its challenge rating:

Acid Jet (Recharge 5–6). The iron sphere extends a nozzle from an open panel and shoots a stream of acid in a 20-foot line that is 5 feet wide. Each creature in that line must make a DC 15 Dexterity saving throw, taking 22 (4d10) acid damage on a failed save… or half as much damage on a successful one.

Autonomous Flight. The iron sphere has a fly speed of 30 feet.

The iron sphere loses its burrow and climb speeds, and it loses its Standing Leap and Tunneler traits.

Cold Iron Weapons. The iron sphere’s melee attacks count as cold iron for the purpose of overcoming resistance and immunity to attacks and damage.

The iron sphere loses its damage resistance to bludgeoning, piercing, and slashing from nonmagical attacks made with cold iron.

Dual-Weaponized. The iron sphere has two of the following actions: Acid Jet, Flamethrower, Ice Catapult, and Lightning Cannon. Each action has Recharge 6.

The iron sphere replaces its Lightning Cannon action with Dual-Weaponized.

Flamethrower (Recharge 5–6). The iron sphere extends a nozzle from an open panel and releases a fan of fire in a 15-foot cone. Each creature in that cone must make a DC 15 Dexterity saving throw, taking 22 (4d10) fire damage on a failed save or half as much damage on a successful one.

Ice Catapult (Recharge 5–6). The iron sphere extends an arm from an open panel and lofts an icy sphere up to 20 feet away that explodes in 10-foot-radius sphere centered on the sphere’s point of impact. Each creature in that sphere must make a DC 15 Dexterity saving throw, taking 22 (4d10) cold damage on a failed save or half as much damage on a successful one.

Silvered. The iron sphere’s melee attacks count as silvered for the purpose of overcoming resistance and immunity to attacks and damage.

The iron sphere loses its damage resistance to bludgeoning, piercing, and slashing from nonmagical attacks that are silvered.

Temple Sphere. The iron sphere is consecrated to a specific deity. It will not attack creatures wearing or presenting the deity’s holy symbol. The sphere has advantage on attack rolls against creatures regarded as enemies to the deity, and these creatures have disadvantage on saving throws against the sphere’s special abilities. Additionally, the sphere gains the Deific Burst attack:

Deific Burst (Recharge 5–6). The iron sphere unleashes a burst of holy or unholy energy in a 20-foot-radius sphere centered on the sphere. Each creature in that sphere must make a DC 15 Dexterity saving throw, taking 22 (4d10) necrotic or radiant (or other damage type, as appropriate to the deity) damage on a failed save or half as much damage on a successful one.

The following magic items and spell are inspired by abilities possessed by an iron sphere:

Gauntlet of the Iron Sphere

This heavy gauntlet, adorned with an onyx, seems to crush your hand when you wear it. Unarmed strikes with your gauntleted hand become magic weapons that deal bludgeoning damage with a +1 bonus to attack rolls and a damage die of 1d8. Your unarmed strikes deal double damage to objects and structures.

If you hold a pound of raw iron ore in the gauntlet, you can use an action to speak the gauntlet’s command word and summon an iron sphere as if you had cast the conjure iron sphere spell. The gauntlet can’t be used this way again until the next dawn.

You summon an iron sphere, which appears in an unoccupied space that you can see within range. If you are a cleric, you can replace the standard iron sphere with a temple sphere. The sphere disappears when it drops to 0 hit points or when the spell ends.

The iron sphere is friendly to you and your companions for the duration. Roll for initiative for the iron sphere, which has its own turns. It obeys commands that you issue to it (no action required by you). If you don’t issue any commands to the sphere, it defends itself from hostile creatures but otherwise takes no actions.

At Higher Levels. When you cast this spell using a 9th-level spell slot, you summon an additional iron sphere.

If you have any requests for monsters from the Creature Codex for future installments, please let me know in the comments or elsewhere in the Kobold Warrens, and I’ll make sure to add them to the queue.