Skip to content
Home / Delve into the Depths in the Kobold Blog / Howling Tower: Chase Scenes

Have you ever had a chase scene in your favorite tabletop RPG? Was it fun and exciting?

I didn’t think so. Chase scenes are a staple in adventure films, but RPG rules seldom tackle them, at least not well.

Long-distance chases aren’t much of a problem. These are situations like Butch Cassidy and the Sundance Kid trying to escape from Charlie Siringo and the Pinkertons, or Aragorn, Legolas, and Gimli trying to overtake the orcs carrying Merry and Pippin back toward Isengard. Chases like that come down to miles per hour, hours per day, and tracking. If the pursuers are faster than their quarry or can keep moving when their quarry stops, then they will catch up, provided they don’t take a wrong turn somewhere. Most RPGs can handle those questions with skills. When the chase is measured in hours or days, no one is disappointed with a high level of abstraction.

A short-distance, high-speed chase is where things get exciting. Speed, agility, and alertness are key when pursuing your target at a dead sprint up busy streets, down narrow alleys, through crowds, and over and around obstacles. A few abstract dice rolls won’t cut it. Players want to make actual decisions about where to turn, how to shake off the guards, and whether to dodge the wedding party or plow right through it.

What I’m presenting here is a way to quickly map a foot chase through crowded city with zero prep work but infinite variety in the layout.

Since I don’t know what game you’re playing, the rules of the chase are up to you. Use your game’s standard system for determining speed, spotting, leaping, and dodging.

You’ll need a standard deck of 52 playing cards (jokers optional) and a fistful of d6s. The cards represent areas where things happen. Dice mark the distance between areas. Shuffle the cards, scrape the dice into a pile, and you’re ready. 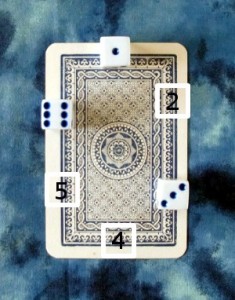 Step 1: The Chase Is On. Take the top card off the deck and place it face down on the table. This is where the chase begins. You’ve already described this area to the players, so the scene is set.

Step 2: Count the Exits. Roll three dice. Put each one on the edge of the card as shown in the first photo, depending on what number came up on the die. In the case of doubles, discard one of the matching dice. Each die placed on the edge of the card represents a street or alley leading out of this area. The quarry is going to take one of the exits. They have a head start; how much depends on your game.

Step 3: How Far to the Next Exit? Pick up the die marking the route that the quarry took, roll it, and place it back where it was, but adjacent to the card instead of on it. It now represents a path, and the number that you rolled is the distance to the next card. The actual distance represented by each pip depends on the game being played. For a foot chase, something along the lines of the distance that an average human can run in 10-20 seconds is a good starting point. In the photo, for example, the path of length 4 would take a normal human about a minute to race through. 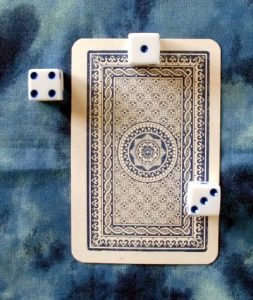 Step 4: Where Are We Now? Draw the next card and place it face-up adjacent to the path. Cards are always placed in a staggered, brick pattern, as shown in the photos. The card that was drawn determines what the new area is; see the lists below. Most areas are just descriptive, but a face card or a joker means a hazard is involved. A hazard must be dealt with before moving on.

Step 5: Where to Next? Roll three dice and arrange them around the new card the same way you did on the starting card. These are the exits. Discard any duplicate numbers and any die that lines up with the spot where the chase came into this area.

Step 6: Cheese It! The quarry picks an exit, you roll that die to determine the distance and place it to mark the path, and draw and place a card to see what the new area is. 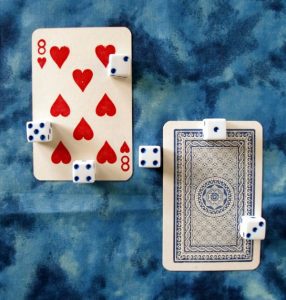 Step 7: Repeat as Necessary. The chase continues from area to area until either the quarry is caught or the pursuer is shaken off.

A card’s suit determines the general nature of an area. 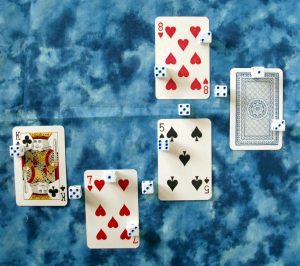 The card’s value determines in a rough way the area’s condition or status. For example, the 9 of clubs would be a middle-class area, while the 2 of clubs probably is a slum. The 9 of diamonds might be a cathedral square, while the 2 of diamonds is a seedy warehouse district. Let your imagination run. Aces are low.

Hazards: Face cards represent hazards to be avoided. The listing here is only a suggestion, suitable for a large medieval or fantasy city such as Lankhmar or Waterdeep. Make your own lists to represent the locations and genres in play. As with other specifics, how these hazards actually affect play depends on the rules being used and is left in the GM’s hands.

A joker represents something truly significant: the King riding through the street, a wizard who really doesn’t like being bumped into, a row of houses burning down, or any other suitably large monkey wrench. Or, you can leave the jokers out and not bother with them.

Variants: I’ll suggest ways to vary and adapt this approach on Wednesday over at howlingtower.com.