Skip to content
Home / Delve into the Depths in the Kobold Blog / Humpday Hazard: Echoing Curse 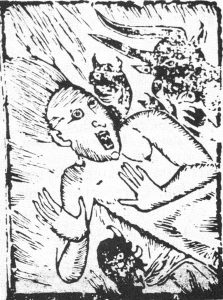 Nyx licked the blade of her punching dagger and slid against the wall. The cracks in the masonry felt icy.

“Do you hear something, Nyx?”

“I said hush, damnit!” Nyx peeled back her halfling braids, put a finger to the back of her ear, and held her breath.

The rest of the group exchanged confused glances in silence. Only the tapping of water and the scuttling of dust beetles broke the gloom of the ancient castle’s stairwell.

“I think the wench is mad,” Hitnor snorted. The rings in his nose jangled when he chuckled. The fighter shouldered his glaive and lit a pinch of pipe-weed. His exhale swirled down the catacomb snow blown from the roof of a cottage…

Nyx flexed her grip on the katar.

“Need I slit each of your misbegotten throats just to earn a moment of silence from you curs?”

The adventurers stood quiet. A deathly still weighted the air. It was only by the grace of Nyx’s darkvision that they were spared the crackling of torches or the dripping of a lantern.

It was then that she heard the sound. At first, it drifted at the edge of perception, like the shifting of a maiden in a distant bed. After a moment, it assumed a sinister vibrato, quivering between the fissures that danced like veins across the arched stone walls.

In a final, fleeting second, the noise took on the shape of three unintelligible syllables.

Nyx screeched and pierced her own eardrums with her thieves’ tools.

Architects, stonemasons, and others adroit in the building of castles speak of an unusual phenomenon. For reasons not yet understood, masonry stone—particularly in ancient manors and strongholds—traps and absorbs sound, not unlike reliefs pressed into a wax mold. While many of these sounds are imperceptible and reverberate only for a few hours, some noises remain imprinted in the walls for days, months, years, or even centuries, echoing forever at the edge of perception.

Most often, the walls will trap only mundane sounds—the flickering of torches, dripping water, the rush of falling rain, or clattering footsteps. Though completely natural, these echoes are often mistaken for ghosts.

In rare instances, however, in catacombs burdened by both age and depth, more sinister trappings can be detected. The wail of the undead, the clanging and hissing of lethal traps, the muted screams of dungeoneers—all have been known to emanate from cracked stone for epochs.

When primeval curses and words of power spoken by (hopefully) long-perished dungeon denizens become absorbed, they echo for an eternity, threatening to unleash their wrath on those unfortunate enough to hear. This hazardous phenomenon is known as an echoing curse.

The trapped whispers of an ancient curse reverberate through the corridor at the edge of silence.

Hazard The stone walls of an ancient corridor, stairwell, or chamber continually echo a faint curse that maddens those who hear it

◊ DC 17 + 1/2 hazard level—If you hear the curse, you recognize the nature of the hazard

Trigger When a creature makes any successful Perception check (DC 19 + 1/2 hazard level) while within the hazard’s area of effect, it attacks; creatures with passive Perception scores greater than the DC are attacked at the start of each of their turns

Countermeasures
◊ You may choose to take a -5 penalty to Perception checks to earn a +5 bonus to Will defense against the hazard’s attack
◊ Non-living creatures or creatures that cannot hear are unaffected by the echoing curse
◊ A bard may play music or sing (Dexterity, Constitution, or Charisma check; hard difficulty) as a minor action to drown out the hazard until the start of his or her next turn