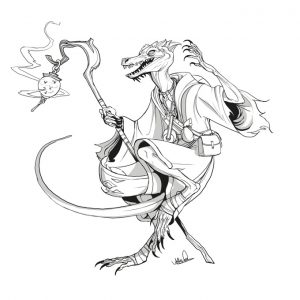 Last week, I had a survey that would pay off with this week’s article. Responses were consistent on wanting a CR 7–10 encounter, but there ended up being a tie between kobolds and bugbears for this week’s star! House rule: When there’s a tie between kobolds and something else, kobolds win. I can perhaps be persuaded to stat out our bugbear rivals in the comment section.

An encounter works best when you have more than one thing to think about. Since it’s kobolds, I had to do a trap. Since this is Kobold Press, of course we have a second trap to knock your unsuspecting player characters back into the first trap, and a vulnerable spellcaster plays the bait! Need I say more? Join me after the jump.

Home field advantage is very important in tribal warfare, so I need to discuss terrain. For this article, imagine a mountain range that is straddled by a great forest valley. At the center of the valley runs a mighty river, and the trees of the forest are immense. Although filled with life and prey, the forest is filled with creatures that pose great danger to both our kobolds and their rivals the bugbears, thus a conflict is born. For the Midguard setting, the Old Margreve is about ideal.

The bugbears have loosely organized into an alliance of smaller gangs that sometimes mix with other goblin subtypes and worgs. In contrast, the kobolds have a highly developed and civilized tribal structure (when tribal and civilized templates meet, I call them clans) based on the teachings of a ninja that took kobold students several generations ago. Bugbear and kobold alike are caught between a roc’s nest in the high peaks and a very hostile forest setting below. Few passes go through the mountains, and both groups covet control since the passes make the best ambush sites for caravans that pass through the area.

Although the social structure remains tribal and the kobolds cling to their draconic heritage, the ways of the ninja have left an imprint on bloodscale society. Deep in the home caves, complex and beautiful paintings serve to teach the basic skills of a trained ninja. Rumors persist that the kobolds have books that teach more, so a possible adventure hook involves a buyer who seeks those manuals.

The encounter site should be in the lower part of the mountain range at a critical pass. The scree and slope make it difficult terrain for those without a climb speed or favored terrain. The pass has a poorly serviced ancient road and is a favorite ambush site for both kobolds and bugbears. Lately it has become a battlefield for the two groups, though both tend to be less active during daylight hours.

Unfortunately for them, the kobolds did not station enough troops in the area for the day because they have rigged this location as a trap for the bugbears. The bloodscales are hoping to draw the bugbears into a day raid because the ground has been thoroughly trapped. There are six ordinary tribe members, the tribal shaman, and the tribal chieftain. The shaman has his hawk familiar in the air scouting ahead, and, unless the player characters are particularly stealthy, the kobolds have ample time to adjust the ambush for their arrival.

The kobolds have a covered 40-ft.-deep spiked pit trap covering the 6 squares in front of the shaman. They also have positioned an avalanche trap rigged by a pull rope 15 feet behind the shaman. Basically, this larger version of the uncovered pit trap is one you can find here, except that spikes at the bottom deal an 2d4 extra damage (+18 to hit) and the Perception check is DC 15. The hope is one or two will charge after the shaman spellcaster and fall in the trap.

If they skirt around the trap to flank or otherwise engage the shaman in melee, the real fun begins. The shaman waits for enemies to get into position then uses his quick runner’s shirt to take an additional move action after someone has closed. He uses flight hex and after he has ascended 10 ft. in the air, the pull rope is tied to his waist, which triggers a 20-ft. wide avalanche (DC 30 Reflex save to avoid). Failure causes 4d6 damage plus a bull rush attempt with a +20 CMB to knock the unwary into the pit! If the effect goes off, the pit trap fills with rubble and becomes a 30-ft. pit trap with no spikes. If any fall in and are still uncrushed by the avalanche, the shaman vomits a spider swarm over the pit, then casts web across the top.

At various other points, the kobolds have pull ropes with large rolling boulders, which, aside from being a potentially painful encounter for the unfortunate player character, also serves to seal off the ends of the road. Finally there’s an outward jutting rock lip that those without flight would find a difficult climb (DC 30). The tribe members retreat to this location and fire arrows on the party if they are injured or do not believe they can win a melee. They have set up triggers for three crossbow net traps to target fliers, which targets touch AC. The triggers set these traps off, and the attack is made with a +14 bonus. The effect of these traps essentially causes the target to be encumbered, and winged flight calls for a flight check with an entangled and encumbered penalty.

Tactics: Skirmish hard, and use the two 15-ft. cone breath weapons particularly from flight. Take advantage of flanking and high ground whenever possible. Open with archery to try to lure PCs in line with rolling boulders.

Tactics: Aside from the trap, use summon monster 2 and vomit swarm to put more bodies on the field. Take a big shot with lightning if possible, but more importantly buff your allies and debuff the enemy.

Tactics: Open with a dazzling display with a massive 27 Intimidate for a big debuff. Follow that by setting things up for the ordinary tribe members to get big sneak attack shots in. These will be finished off by the 5-attack routine. Remember to use Quickdraw when wanting to control range. Ideally this character prefers melee, but will do what is best for the team. Shaman has likely shared spirit of protection on the chief for this combat.