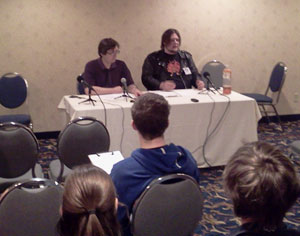 Kobolds Wolfgang Baur and Sigfried Trent joined forces at PaizoCon 2011 on Sunday. Their goal for this seminar: They wanted to provide you with some excellent tips and tricks for designing better feats and traits. To help fulfill this goal, we’ve collected the highlights from the seminar and posted them here. What’s the most important tip? Keep it simple so that you don’t slow down gameplay at the table. Avoid multiple rolls and lots of charts. You can read more tips beyond the jump.

You can see these tips come to life in Complete Advanced Feats by Sigfried Trent.