Skip to content
Home / Delve into the Depths in the Kobold Blog / What’s in a Name? The Swashbuckler vs. the Duelist 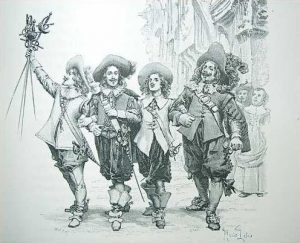 Fighters come in all shapes and sizes, but for the longest time any player who wanted to really capture the flash of steel and the swagger of characters like Inigo Montoya or d’Artagnan had to make do with the duelist prestige class. Then the Advanced Class Guide came out, and it brought the swashbuckler to the table. The usual talk started up about how, now that we had this new expansion, the old class was left in the dust.

Even though Pathfinder players have mostly shaken off the shiny red ball syndrome that came with the release of the Advanced Class Guide, this time they seem to be right. The duelist is what went into the chrysalis, but what emerged was the swashbuckler.

Let’s get back to basics. The duelist is a 10-level prestige class that you can’t start until at least level 7. It gives you abilities that increase your damage with light and one-handed piercing weapons, and it also gives you bonuses to your Armor Class as long as you wear light or no armor. The most unique feature of the duelist was that it allowed you to “save” an attack made during a full attack action to parry an attack later. When you successfully parried an attack, you could then make a riposte as an attack of opportunity. You gained a few other useful abilities, such as acrobatic charge and Deflect Arrows (as well as the 10th-level ability Crippling Critical, which let you deal terrible effects to an enemy you dealt a confirmed critical hit to), but overall the duelist would need a solid base to be built on.

The swashbuckler brings more to the table, though (it would have to in order to warrant it being made into a class of its own). For example, duelists could not use any kind of shield, whereas swashbucklers can use bucklers while performing their deeds. The swashbuckler also has the ability to use panache points to increase Acrobatics, Escape Artist, and Fly checks, and to increase the character’s AC. Swashbucklers can stand from prone without provoking attacks of opportunity (an ability all of us wish we had at some time or another), and it gains the ability to cripple enemies with precision sword thrusts. You throw in bonus combat feats, and there really is no competition.

You also get to parry at level 1 instead of level 10, which has gotten just about the amount of praise it deserves.

The Weaknesses of Both Classes

Both the swashbuckler and the duelist before it have very simple goals. They are classes that allow melee fighters to wear very little armor while maintaining high defensive capabilities, and they allow you to do more damage with lighter weapons instead of heavy, two-handed crowbars. While the swashbuckler has a much bigger bag of tricks than its forebear does, players should be aware the classes have the same weaknesses.

First on the list is anything with damage reduction that can’t be bypassed by piercing weapons. One of the most common irritants swasbucklers are going to come up against are creatures like skeletons or constructs who knock between 5 and 10 points off every thrust. After damage reduction is the fact that swashbucklers are mostly melee-based characters (though there is at least one archetype and at least one basic deed that let you throw darts and daggers to great effect). Creatures that can fly, or which simply have more movement than you do, are going to be the bane of your existence. Lastly, anything that ignores precision damage will be a hefty challenge. That list is a lot smaller in Pathfinder than in some other games, but it still includes creatures without discernible anatomies (which is why shoggoths are a nightmare for swashbucklers).

So what do you do? Well, knowing your weaknesses is just as important as knowing your strengths. Thrown weapons like alchemist fire can come in handy during low-level scrapes, and even an item as basic as a lasso can make it hard for fast-moving enemies to get away from you. A cape of flying is always a good idea, and though it might mean you don’t get to use your shiniest tricks, it might be a good idea to keep backup weapons on hand so you can deal bludgeoning or slashing damage when you need to.

Also, remember, a morning star is technically a one-handed piercing weapon. Who wouldn’t be terrified of a swashbuckler carrying one of those?

If you’d like more great gaming insights then check out Neal F. Litherland’s blog Improved Initiative! Also, if you’ve ever been curious about where the word swashbuckler comes from, here’s your answer on infobarrel.com!

2 thoughts on “What’s in a Name? The Swashbuckler vs. the Duelist”