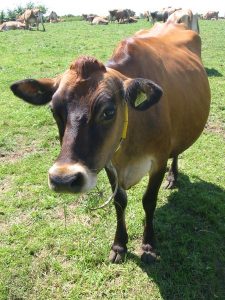 Calvert Thome—a successful rancher until his prize cows began to mysteriously disappear—approached the field where his herd grazed. While he braced himself for more bad news, he did not expect the sight that greeted him. Next to the mutilated carcass of another cow, the smallest of his cows was digging a grave, using claws rather than hooves. Glancing up, the “cow” shrugged its shoulders and bared 2-inch-long fangs at the revolted rancher.

Lunging for its new victim, the beast reveled in his final screams of pain and terror, then turned to slaughter the rest of the cattle. Its butchery complete, it transformed into an innocuous rabbit and hopped away, leaving the corpses to rot.

Charnel cows hail from the lower planes, where the denizens hunt them for food or sport. While they are clever compared to their earthly counterparts, they can’t escape most daemons, demons, or devils. Occasionally, one (or an entire herd) escapes through a portal to the Material Plane to wreak havoc on mundane herd animals and their owners…

TACTICS
Before Combat A charnel cow appears plain and unassuming to catch weak prey unaware or to avoid notice by stronger creatures. If it can catch a single enemy unaware, the cow ambushes the creature and changes shape or trots away to throw suspicion off itself.

During Combat Against a weaker foe, a charnel cow toys with its victim, frightening it and then wearing it down, taking its time to finally slay the unfortunate creature. When combating stronger competition, it breathes a malodorous cloud to incapacitate its enemies to give it time to change shape and run away.

Morale If reduced to 10 hp, the charnel cow tries to escape. If any lower planar denizens (real or illusory) enter the combat, the creature flees immediately.

In their home planes, charnel cows true appearance is that of runty, leprous bovines, and they dwell at the bottom of the food chain. Millennia of torment and hunting have made them into bitterly cruel creatures, so an opportunity to escape and torture unsuspecting victims pleases them immensely.

Outside their native environment, these creatures sadistically kill everything they can get away with. They hide their activities as well as they can, usually by attracting other predators or staging accidents.

Charnel cows provide sustenance for many residents of the lower planes. Getting killed and eaten in their home planes doesn’t destroy charnel cows, since they are cursed to reform in a week’s time. Oddly, though, they can be destroyed on the Material Plane. Despite all these creatures have endured, charnel cows do not work together at all and, instead, purposely slow down others of their kind when escape presents itself. This behavior turns violently competitive whenever a herd escapes to the Material Plane, with each cow increasing its barbarity to a sickening degree in a display of superiority to the others.

Charnel cows love surprising and terrorizing intelligent prey, which in their minds improves the taste of the meat. An animal’s fear closely approximates an intelligent being’s fear, appeasing these evil bovines until a better meal presents itself. They are consummate bullies who flee at the first sign of strong resistance, and they never stick around when a daemon, demon, or devil shows up.

These creatures would rather die than return to their natural habitats, so a desperate cow will throw itself off a cliff or find a convenient paladin to avoid that fate.