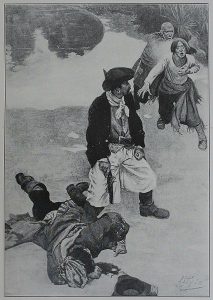 As a kobold treat, here’s a specially creepy monster for the holiday (that fits right in with the new Dark Deeds in Freeport patron project).

Happy Halloween from all the kobolds!

Moored by gulfweed, the derelict ship creaked with each tide that passed under the entangling sargasso. Light streamed in from the porthole onto the rotted finery of the captain’s quarters. Sour Pete’s eyes turned to the chest in the corner and the thing draped across it. Judging by the ostentatious hat that hid its face, he reckoned it was the captain’s skeleton that clung jealously to the trunk…

Sour Pete kicked the bones, sending them rattling to the floor. The captain’s hat rolled to his companion’s feet. Sour Pete kneeled over the chest.

“Barney, come look at this; it could be trapped.”

All Sour Pete heard in reply was the sailor giggling like a child.

His eyes still on the chest’s metal banding, Sour Pete growled, “Stop foolin’ around, and come deal to this lock, you worthless thief!”

Sour Pete swore under his breath. “Belay that, Barnacle! You’re liable to wake the dead!”

Then he turned around to see what had so amused his mate. Instead, he looked into the eyeless skull of the skeletal captain, standing now as if it still had flesh and blood. Instead of being filled with fear, Sour Pete was struck with the irony of his last statement. For the first time in his adult life, Sour Pete had to laugh.

SPECIAL ABILTIES
Float (Su) A jolly roger is buoyant and gains a +4 bonus to Swim checks on the surface. If forced below the water, the Jolly Roger rises at 60 ft. /round until it reaches the surface.

Hideous Grin (Su) This resembles a gaze attack but emanates from the jolly roger’s mouth rather than its eyes. Any creature within 30 ft. that sees the jolly roger’s lipless grin is affected by hideous laughter (Will DC 14; CL 3rd; Charisma-based). The jolly roger is a humanoid for the purpose of this effect.

Easily mistaken for a common animated skeleton, jolly rogers are raised from the bones of dead sailors and retain some of the seamanship they had in life. However, the jolly roger gains its name and its horror from the permanent smile on its skull-face.

A sailor returned as a jolly roger — whether by a necromancer’s magic or by personal tenacity — desires only to sail and fight. Negative energy strips away all personality. With the skills it retains, a jolly roger can serve as a sailor or officer on a ship of undead. Though it lacks the means to speak, the jolly roger understands languages it knew in life and directs mindless undead well enough to serve as crew.

The jolly roger might be a captain itself or serve under a necromancer or intelligent undead. If the jolly roger serves alongside living sailors, it must be careful to keep its face concealed. This also disguises it from those who might disapprove of undead sailors.

Those who have survived the effects of a jolly roger’s hideous grin speak of a terrible truth locked behind its smile. The trip to underworld and back strips the jolly roger of its humanity, but perhaps, it replaces it with some profane wisdom, as if Death itself has let the jolly roger in on the cosmic joke. While it cannot speak, those who see the jolly roger’s unhealthy grin gain a brief glimpse of the punch line. Such unfortunate souls can never remember what they experienced, but in their hearts, they know if they didn’t laugh they would have to cry.

A caster of 13th level or higher can animate a jolly roger with the spell create undead.