Skip to content
Home / Delve into the Depths in the Kobold Blog / Capleon Speculator: A Background 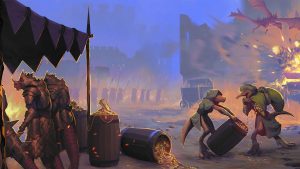 It is called the City of Peace and aptly so, for they say that in Capleon even murder is done with courtesy and grace. (See also Midgard Expanded: The Travels of Lucano Volpe, or So It Begins.)

On the outside, it’s a bustling, port-city of drovers and teamsters, of tradesman, wholesalers, and ship captains. Its crowded streets teem with braying pack animals, teetering wagon trains, travelers, merchants, and charlatans of every color and stripe. But it is through the quiet offices, private boardrooms, and high-tower apartments of the five families that the true lifeblood of Capleon flows. Here business is conducted and international trade is “influenced” with a subtle and dangerous sophistication rivaling any in Midgard.

As a young courier among Capleon’s many trading-centers, you carried news of market fluctuations, cargo assessments, and bidding wars. Later becoming trusted with private receipts and coded or verbal messages between backers and buyers, merchants, and middlemen, you quickly became fluent in the language and dance of the deal.

As quick with a stiletto as a stylus, you rose to trusted “money man”, facilitating connections, financing and acquiring luxuries or investments on speculation, all while navigating the loose regulations and informal practices of open trade and private finance in Capleon.

To your credit, you soon became affiliated with the association of elite investors, bankers, and speculators unofficially known as the “Salt and Spice Bank.”

However, one does not rise through the ranks of (this) Perro Omjaya’s financial organization without doing business at some point for or with one of the five families—occasionally resulting in exposure to the inner workings of certain less savory and backroom aspects of pragmatic, high-level business. 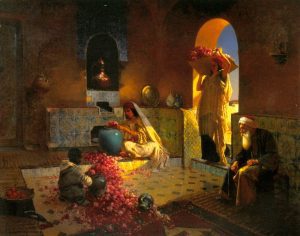 Skill Proficiencies: Insight and choose from Deception, Intimidation, or Persuasion

Tool Proficiencies: One gaming set of your choice

Languages: One of your choice

Equipment: A vellum ledger-book, ink and quill, a set of fine clothes and a silk purse containing 7g.p.

You are exceptionally skilled at reading the “tell,” intuiting mood and motive, inclination and intent, through body-language, tone, and involuntary expression.

The Disengage action cannot be used against you to prevent opportunity attacks. Also, all Deception, Persuasion, and Sleight of Hand checks made against you suffer disadvantage.

Additionally, while in the vicinity of the Seven Cites, you have access to local networks of (questionable?) business contacts, potential creditors, informants, and shipping interests who might “owe a favor.”

For more insight into Capleon and the splendor of the Seven Cities, be sure to check out the Midgard Campaign Setting.