Skip to content
Home / Delve into the Depths in the Kobold Blog / Midgard RPG Miniatures: Q&A With Mick Leach 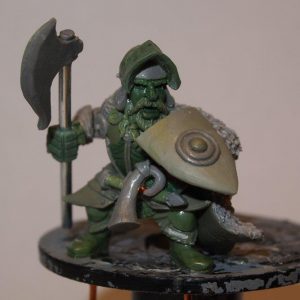 The Midgard RPG Miniatures Kickstarter is in its final week! Having raised more than $15,000 Eastern Front Studios will be producing astounding new miniatures based on the Midgard Campaign Setting, including the Grisal Dwarf, Raven Mage, Mharoti Emissary and many more. We invite you to back the campaign and get your hands on these cool minis.

Running a Kickstarter in its final days is busy work, but Eastern Front’s Mick Leach tore himself away from Kicktraq for a few minutes to give us an interview.

Q: How did Eastern Front find themselves collaborating with the Kobold King on a new line of cool miniatures for the Midgard Campaign Setting? Did you take a wrong turn down a fey road, or was it a more mundane partnership?

A: Some time ago in 2010, Wolfgang and I talked about the idea of doing miniatures. So it has been a long time coming, and the advent of Kickstarter gave this project a huge helping hand.

Q: Are there any Midgard minis that you have a particular fondness for? How about the fans — have they picked any favorites?

A:The aboleth has been hugely popular.

Q:Tell us a bit about your process, and what makes your minis outstanding.

A: We have several things that help make our minis outstanding! A big one is that we have a large amount of talented sculptors, great concept artists and 3d programers to help us create new Rapid Prototype miniatures.

Q:How did you get into designing and manufacturing miniatures?

A: Having always been a kid who played with army men, and later discovering Heritage Dungeon Dwellers, I was hooked on gaming miniatures before I even knew what gaming or D&D was. I started collecting tons of minis in the 80s and playing AD&D.

I eventually started painting minis while in the Army and found I was pretty good at it. I devoured a Mike McVey how-to small pamphlet until it was literally falling apart. When I left the Army 4 years later after the first Gulf War I returned home and started going to cons down South where I won quite a few contests.

My best friend’s sister was married to an ex-TSR vice president. He introduced me to Andy Chernak of Grenadier, who I first painted for. Later I would clean-sweep a contest at a con in South Carolina where Ral Partha attended. That was where I really got noticed and recognized a professional.

Through the 90’s I painted professionally for nearly every game company that was around back then: Ral Partha, HeartBreaker, Grenadier, ThunderBolt Mountain, Games Workshop, Reaper and GrimReaper, to name a few.

After doing that for a while I moved into doing 15mm full time. It wasn’t easy making it as a freelancer back then, before the Internet became widespread. You had to attend shows, make a lot of phone calls, and work hard to build word of mouth. But I stuck with it, and when the internet hit big, painters were suddenly in hot demand! So I continued painting minis and in 2002 I got the idea to do miniatures.

In 2003 I had the first miniatures for Eastern Front Studios out. But again, hard times came and minis and metal prices shot through the roof. To top it off sickness got the better of me, so I had to set EFS on the back burner for about 4 years.

So it’s come full circle for me, from loving minis as a kid, to painting, to production for myself, and now for others as Kickstarter has opened even more doors. Now we’re working with multiple talented people from other games and now even producing for them — such as Andy Hopp’s Low Life. So yeah, I live and breathe games and miniatures.

A: Probably one of the kobolds. Or Baba Yaga’s Hut.