Skip to content
Home / Delve into the Depths in the Kobold Blog / Kobold Guide to Magic: Gender and Magic 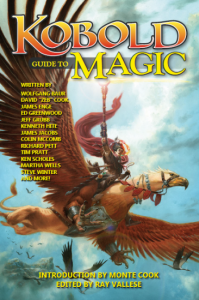 “Gender” can be thought of as a social construct that defines a set of accepted behaviors and attitudes for a group of individuals, usually (but not always) based on biological sex. Defining gender categories in a world setting is a task unto itself. A world may have more than two biological sexes and strict gender roles for each, or it may have two sexes but flexible gender roles based on physical characteristics, social class, ethnicity, age, or any other characteristic you can imagine.

Once gender categories are defined, though, you can start to brainstorm how magic and gender might be related. Let’s examine four distinct possibilities…

Template 1: Different genders use the same magic the same way

In this template, all genders have access to the same type of magic, and the magic works the same for everyone. This is not to say that everyone in the world has the same level of proficiency with magic, but anyone who can learn to use magic—regardless of gender—accesses and uses magic in the same way.

The world of Harry Potter by J.K. Rowling is a good example of this setting. Men and women study and practice magic in the same manner. Not all schools are coed (the Durmstrang Institute and Beauxbatons Academy of Magic are gender segregated), but this is due to social convention, not the manner in which magic is practiced or learned. Both men and women serve in the Ministry of Magic and hold academic positions at Hogwarts.

This is the default template for most roleplaying games. There are good reasons to use this model in a game: it’s less complicated, requires no extra rules, and probably won’t offend any players. Other templates, however, can more robustly define a world.

In this template, the different genders have access to completely different types of magic. At the deepest level, all magic might spring from the same source, but by the time it reaches a level of study and practice, the magic of one gender is distinctly different from that of another.

In the Discworld series by Terry Pratchett, men who use magic generally study at Unseen University and are granted the title of wizard (or in certain special cases, “Wizzard”). Wizardly magic exists in books and can be studied and learned. By comparison, women who use magic are called witches and their magic is much more intuitive. Granny Weatherwax, a prominent witch in the series, often refers to magic as “headology” and implies it may not be more than cultivating a certain attitude and appearance, combined with knowledge of human behavior.

The division between wizards and witches in Discworld is much sharper than at Hogwarts. The magic of each gender is specific and consistent and easily recognized as one or the other. Pratchett’s book Equal Rites details the issues that arise when a woman attempts to enter Unseen University and study as a wizard. The title alone shows Pratchett’s attention to the fact that women and men use magic differently in his world, and the book is a hilarious exploration of what those gender distinctions mean.

The Discworld setting is also an example of gendered titles (men are wizards, women are witches) and magical inheritance (magic being passed down through bloodlines). In a world where magic is gender-segregated, titles may arise to define people able to use the magic specific to their gender.

Here we enter a more complicated setting, where all genders access the same magic but the results differ profoundly. One gender may be attuned to the magic and use it more easily, while other genders struggle to master even the most basic incantations. Men and women may only manipulate certain facets of the same magical energy, such as if men have access to damage-dealing spells and women have access to healing spells. Or the use of magic may affect one gender differently than another.

We can see this last effect in Robert Jordan’s Wheel of Time series. The One Power illustrated in the series operates through a complex series of rules, many of which are gender specific. Most notably, the Dark One’s corruption of the One Power caused men to become cursed and go mad if they attempted to channel power. Women were immune from this curse, leading to a female-centric faction that tracked down and “gentled” male channelers.

The full essay is found in theKobold Guide to Magic.

2 thoughts on “Kobold Guide to Magic: Gender and Magic”