Skip to content
Home / Delve into the Depths in the Kobold Blog / Midgard Expanded: The Travels of Lucano Volpe, or Rescued by Yakfolk 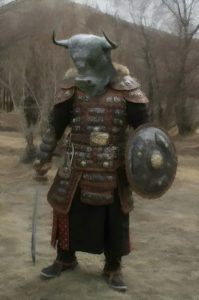 When a traveler leaves Khubara, the local people have a quaint custom in which they attack the departing voyager and attempt to rob him of both goods and life. Such was the farewell we experienced upon our own leave taking. Now, I shall not say all in Khubara advocate such behavior, for I did not see all of them waylay us, but there were a significant number of them.

I should like to say that my stalwart blade flashed in the sun, dispatching foes with every stroke until the ladies watching from the walls of the city did swoon beneath their dark head wraps. But I cannot say such for I fell from my horse at the first appearance of our attackers, struck my head on a stone, and woke up hours later. According to Agosto, the assassins bore the sign of some many-armed creature upon their necks and chest in the form of a tattoo. They struck in silence, never uttering a word and seemed to ignore any injury dealt upon them. It was only through divine providence and my servant’s liberal use of the alchemical explosives he so enjoyed concocting that we made our escape.

When I regained my senses, we were many miles from Khubara. It was then that I met the “divine providence” I spoke of so recently. Tenzen Gorkha, a creature much like the Minotaur of the Midlands, but instead of bull features, his people descend from the local yak. These yakfolk live in and around the Plateau of Leng; a place I unfortunately would come to know much too well. Tenzen told us he was a Kham, some manner of spiritual warrior perhaps akin to a paladin or knight, and when he observed us in need, he acted. Overflowing with praise for our new friend, Agosto says the yakfolk’s blade, spells, and fury made short work of the assassins. For a day and a half, our course followed Tenzen’s and we spoke of many of the things I have already told you and when we parted it was as friends. 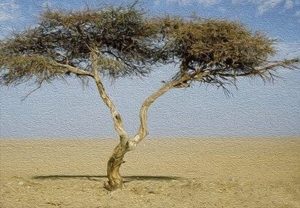 On leaving the mountains, a traveler passes for eight full days through a very arid desert where there are no fruits or trees, and the water is as bitter and bad as any encountered. Enough food and drink must be carried for the duration of travel in this area. Only scattered shrubs provide any respite from sand and rock. These plants, called chawal by the few locals we encountered, can be burnt at night as the air becomes very chill once the sun has set. However, the smoke from the oily leaves can cause pain in the lungs and even death if you are exposed to it for a significant amount of time. The story told to me relates that this was once a fruitful valley beloved by the gods themselves, but when the folk of Beldestan turned to worshiping the void, the valley became a wasteland overnight. Whether the tale is true or not, this desert, though a wretched place fit for none but the sand wolves, laughing dogs, and foul beasts, has a singular redeeming feature.

At the center of the Thaln rises the Solitary Tree. Called Kurrutherek by the local tribesmen, this towering tree is the only tree for hundreds of miles. I will tell you what it is like. It is of great height, standing perhaps two hundred feet from the ground. During the day, the tree is barren and twisted. However, once the moon rises, the tree blooms and straightens to become the loveliest tree in the entire world. The leaves of this tree are green on one side and white on the other. The seeds that fall from the branches at night have husks like those of the chestnut except that these have a golden nut within that nourishes the body and uplifts the spirit.

Unfortunately for Agosto and myself, this would prove to be the last uplifting event to happen to us for quite some time.

Midgard Expanded: The Travels of Lucano Volpe, or Cities in the Sky

4 thoughts on “Midgard Expanded: The Travels of Lucano Volpe, or Rescued by Yakfolk”