Skip to content
Home / Delve into the Depths in the Kobold Blog / Trapmaster: Seasons of Love 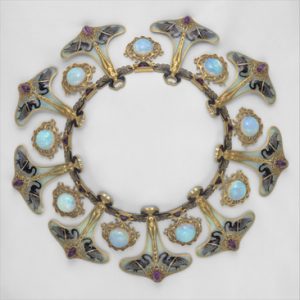 Mira spat with frustration. It seemed a shame to leave some of the best pieces behind, but as the verse hinted, there is always some loss in the search for love…

A rosewood box on a recessed shelf awaits across from the entrance to this 15-ft.-by-20-ft. chamber. The walls and 20-ft.-high vaulted ceiling bear the mural of an idyllic retreat in the woods, just the kind sought by lovers for a private tryst. Floor mosaics complement the murals with twelve evenly spaced plaques set into the pattern. These monuments are fashioned from copper, silver, and gold: four of each precious metal. The copper plaques depict a young man with curly hair, the silver an old, respectable-looking man, while the gold plaques portray a handsome man with a head of thick, wavy hair.

Close fast the portal to my secrets,
lest you feel the flame of passion,
the ice of rejection,
and the choking gasps of sadness,
repeating over and over.

The interior of the jewel box contains twelve padded sections, three spaces wide by four deep. Each holds a stunning piece of jewelry, brilliant gemstones set in precious metal. The jewelry settings (four each of copper, gold, and silver) await in the same orientation as the plaques in the floor. A poem inscribed in a brass plate on the underside of the lid reads:

Five seasons was my first love pure,
an auburn-flamed and wild coiffure.

I cast aside for glided mane,
who granted back three summer’s pain.

I next trusted age’s silvered brow,
one winter’s chill absolved our vow.

Then returned to me, my youthful flame,
’til end of days by choice remained.

The first verse refers to the Pains of Love Trap: magical effects filling both the inner chamber and the antechamber beyond. Closing the door between the two rooms bypasses the trap, which triggers one effect per round, repeating sequentially until either the jewel box or the door is closed. The trap’s magical aura and trigger are located on the ceiling inside the door between the two rooms. When closed, the door locks itself automatically. 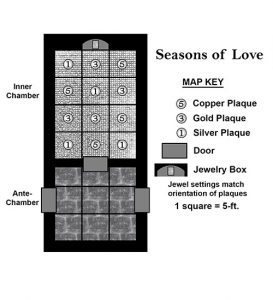 Removing any piece of jewelry from the box triggers pit trap that makes up the entirety of the floor of the inner chamber (and re-engages the lock on the chamber door if it has been disabled). After a delay (hinted at by the second set of verses), the floor begins to fall away in pieces, tumbling creatures into the pit below. The silver plaques drop away after one round, the gold after three rounds, and the copper after five rounds. The copper floor sections remain stable if the copper-set jewelry is returned to or left in the jewel box. Each 5-ft. section of collapsing floor must be disarmed independently.

Picking the door lock manually takes 5 rounds per attempt. Driving a spike into the wall or climbing it is a tricky proposition, and sufficient damage to the plaster releases poison dust into the air. Pounding spikes into the wall may alert nearby creatures or wandering monsters.

Walls: Smooth plaster is unclimbable. Gouging grooves into the plaster triggers the trap, and allows a DC 25 Climb check. Taking 10 to disarm the Pains of Love Trap while climbing is not possible, unless anchored with rope and spikes. Driving spikes into the wall requires a DC 20 Strength check, DC 15 at the mortar lines, which can only be revealed by gouging the plaster. Flying, levitating or spider-climbing creatures are not distracted when disarming the Pains of Love.

Falling Floor: Jumping to or from a collapsing square with more than one creature increases the Acrobatics check by +4 per creature beyond the first. Large creatures can squeeze onto a 5-ft. section, but no other creature can share the space.

Detecting the poison dust in the plaster (which deals Dangerous damage, with a DC 15 Constitution saving throw for half) requires a DC 25 Wisdom (perception) check and a DC 25 Intelligence (investigation) or Wisdom (medicine) check to disable. Driving a spike into the wall is a DC 20 Strength (athletics) check as is climbing etched grooves. The Pains of Love trap (flame strike, cone of cold, cloudkill) is revealed from the floor with a DC 25 Intelligence (arcana) check or detect magic. A PC at the ceiling can disarm all three effects with a DC 20 Intelligence (arcana) check, otherwise a dispel magic (DC 15) disarms one effect plus one additional effect for every 5 points exceeding the DC. The pit traps are disabled individually with thieves’ tools and a DC 28 Dexterity check and deal 5d6 falling damage plus the damage dealt by the spikes (1d4 spikes, +7 attack, setback damage). A DC 15 Dexterity save allows a standing jump off a crumbling section, with disadvantage if more than one creature occupies either square.

Identifying the poison in the wall plaster is a Hard task, as is protecting oneself from it; the poison deals Hard damage. Spiking the wall is a Hard task, as is climbing etched grooves. Detecting the magical trap above is Hard, disabling it is Ridiculously Hard, unless a character has ascended safely to the ceiling, in which case it is a Normal Task. Each effect deals Hard Multiple Target damage of the appropriate type (fire, cold, and poison). The pits deal Hard Single Target damage from the fall, and Normal Single Target Damage (lower # of dice) from 1d4 spikes with a Normal attack bonus. A Normal save allows a jump from one crumbling floor section to another: the save is Hard if more than one creature occupies either square.

Assassins recognize the poison in the plaster dust before it can take effect, as can thieves with a delicate tasks and traps check, or a druid or dwarf with a 3d6 wisdom check. Recognizing the poison allows preventative measures to be taken to avoid inhaling it, otherwise a Saving throw is required to avoid 1d6 points of Strength damage (which recovers at a rate of 1 point per day, or immediately with neutralize poison). A thief who climbs to the ceiling on etched grooves or spikes (no check needed) can fool the trigger of the Pains of Love trap with a delicate tasks check, a magic user or druid can use dispel magic (vs. a 12th-level caster) to defeat it. Each type of damage from the ceiling trap (fire, cold, poison) deals 4d6 damage (save for half). The pit is 30-ft. deep (3d6 falling damage), and the 1d4 spikes attack with a +5 bonus and deal 1d4 points of damage each. Jumping off a crumbling floor section requires a Saving throw: a -2 penalty is applied if more than one creature occupies either square.