Skip to content
Home / Delve into the Depths in the Kobold Blog / Midgard Expanded: The Travels of Lucano Volpe, or So It Begins 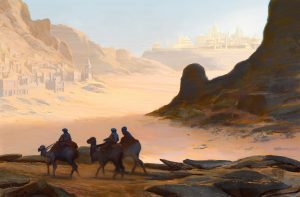 Introduction, In Which We Meet Our Narrator and Learn Of His Reasons

YE emperors, kings, dukes, marquises, earls, and knights, and all other people desirous of knowing the diversities of the races of Midgard, as well as the diversities of kingdoms, provinces, and regions of all parts of the East, read through this account, and I will relate the greatest and most marvelous characteristics of the peoples especially of Beldestan, Khandiria, Sikkim, and Cathay.

I, known by the name Lucano Volpe, a patrician in good standing of the city of Moredo and considered by many to be a wise and learned citizen of the Barony of Capleon, shall state distinctly what things I saw and what things I heard from trusted others.

It should be known to the reader that, at the time when Sultana Casmara Azrabahir was empress of the Mharoti Empire and when the generous Baron Cazagoza then resided in the Lion’s Rock, my father, Narvaro Volpe, a noted merchant captain, returned to Capleon after losing a ship of his own with a rich and varied cargo of merchandise, having run aground due to storms along the silk sea route from the East.

After mature deliberation on the subject of the ruination of the family accounts, my father wondered if a land passage to Cathay would provide a safer route to the silk riches of the East. But having reached an advanced age and still ill from the trials of his ill-fortuned sea voyage, the honor of the endeavor fell to myself.

Herein, I shall relate what transpired upon my journey, according to the desires of my patroness Marta Cazagoza, and for the knowledge and benefit of those who will follow.

Part One, In Which Volpe Prepares His Expedition and Departs from Capleon

Having pledged myself to the journey, my first responsibility was to gather what supplies and servants I believed most suited to an expedition heretofore unmatched in length or travails. My family’s fortunes being somewhat depleted, I turned instead to my heart-love Marta. As ever thrilled and supportive of my endeavors, she readily agreed to supply what monies I required. Her own purse knew no limits, being as she was the niece of the baron himself.

I would be remiss if I did not spend a moment on Marta. Skin, smooth as buttermilk; lips, as the rose; hair, as long and black as tumbling ebony silk; she held my heart in her hands. And hers, I held in turn. Though we sorrowed at our parting, we both held fast to our love and the knowledge that the renown I was sure to gain upon discovering a new silk route would, at last, clear any impediment to our union.

Once the supplies were obtained and my servant Agosto and I embarked onto the Scaled Wing, a sturdy ship bound for Qiresh in the Betik Province of the Mharoti Empire. It would be from that small port that our journey overland would begin.

As we parted, Marta gave me a most curious item: a signaling compass. Handed down from her maternal uncle, the famed Explorer-Captain Emilie Esta, it is said that this was the device Esta used to blind the remaining good eye of the dreaded Minotaur pirate Octar Bloodeye! About the size of the palm, the item opened via a clever latch to reveal an ornate compass on one side and a painted miniature of my dear Marta’s face on the other. It would surely keep me in good spirits during the journey to come!

The exterior of this clamshell metal case features a polished, mirror-like surface on one side and ornate filigree on the other. Inside is a non-magical, magnetic compass. When the case is closed and a command word is spoken, the mirror side reflects nearby light (anything equal to torch light or greater) and projects a harmless ray of light up to a mile away.

Once per day, the signaling compass can be used to blind a foe within 60 feet. The foe must be struck with a successful ranged touch attack and must fail a DC 15 Fort save or be blinded for 1d4 rounds. Using the signaling compass in this way renders all of its magical ability inert for 24 hours.

9 thoughts on “Midgard Expanded: The Travels of Lucano Volpe, or So It Begins”