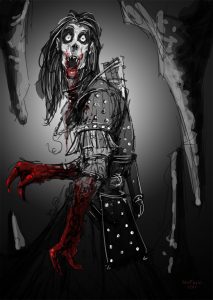 The Thing That Cuts

The thinning of the veil trap and the healer’s touch trap need something, someone, to activate their effects. Channor the Cruel, Champion of Hunger, can easily fulfill that need.

TACTICS
Before Combat Channor uses disguise self to appear more benign, enabling him to get closer to his targets.
During Combat Channor attacks paladins and clerics first as they represent the greatest threat to him.
Morale Channor fears his second death. When brought under 20 hp, he tries to flee.

SPECIAL ABILITIES
Disease (Su) Ghoul Fever: bite—injury; save Fort DC 15; onset 1 day; frequency 1/day; effect 1d3 Con and 1d3 Dex damage; cure 2 consecutive saves. The save DC is Charisma-based. A humanoid who dies of ghoul fever rises as a ghoul at the next midnight. A humanoid who becomes a ghoul in this way retains none of the abilities it possessed in life. It is not under the control of any other ghouls, but it hungers for the flesh of the living and behaves like a normal ghoul in all respects. A humanoid of 4 Hit Dice or more rises as a ghast.