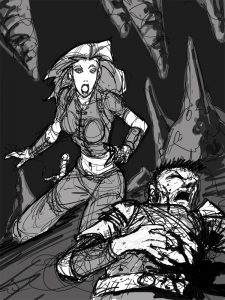 A gateway between the surface and the night below, the Blood Caves are made more dangerous due to the negative energy that suffuses the caves, an energy that gives the caves their name. While within, bound wounds start to haemorrhage once more, and healing magic sometimes fails to work. Blood flows easily in these caves.

Thinning of the Veil Trap (CR 2)

Type magic; Perception DC 25; Disable Device DC 25
Trigger touch; Reset automatic …
Effect impeded healing magic (casting spells from the healing subschool is more difficult; to cast these spells, you must make a concentration check (DC 15 + the level of the spell); on a failure, the spell does not function but is still lost as a prepared spell or spell slot; on a success, the spell functions normally)
Effect spell effect (bleed, DC 10 Will save negates)

Due to its nature, the thinning of the veil trap cannot be fully disabled, only suppressed for 1d4+1 ×10 minutes on a successful Disable Device check. Inscribing a rune of life on the cave’s walls invokes the Plane of Positive Energy, which momentarily balances out the negative influence.

The Blood Caves have claimed many a soul through the ages, some of these souls never escape the negative maelstrom of the caves, these souls are doomed to relive their last actions until they are set free.

Lanore swayed on her feet, she was bleeding badly from several wounds. These damned caves interfered with her magic. She had  already lost one of her healing spells. She stumbled toward her brother, who lay crumpled upon the cave’s floor. Her magic stopped his bleeding, but then the wounds reopened. She tried again, but with her magic fizzling, she could only watch as her brother slipped away.