Skip to content
Home / Delve into the Depths in the Kobold Blog / Midgard Expanded: The Travels of Lucano Volpe, or Cities in the Sky 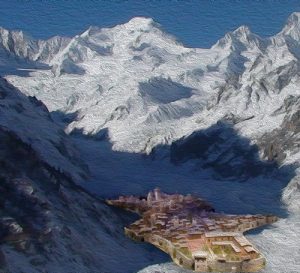 Part 6, On the Plains of Qaen, Flying Cities, and the Mountains of Beldestan

A traveler who leaves Rhaga to journey eastward rides for seven days across the Plains of Qaen. No lodging houses operate in this land except in a few remote locations. Many beautiful groves of date palms grow here and abundant wild game makes for plentiful hunting. It was while traveling across these fine lands that I first beheld one of the fabled Flying Cities of Sikkim.

To be fair it was Agosto who spotted the wonder first. Alerted by my servant’s cry of wonder, we saw one of the famed Flying Cities of Sikkim emerging out of a cloud high above. I had, of course, heard of these mighty cities of the air and how they traveled from their distant homeland to destinations such as Zobeck or Nuria Natal.

The Flying City was formed of five tori, or rings like plump wagon wheels, laid upon their sides with the largest on the bottom and each above in decreasing size. Marvelously, we could see the occupants of that city lived in defiance of gravity itself as the sides of these rings were dotted with farmlands or streets and buildings. Gazing upward at it, I beheld buildings, narrow streets, and even people upon the underside of the lowest ring. I fancied that one of those dwellers might at that very moment be looking “upward” to see me standing upon my hill looking upward in turn. We watched until the Flying City vanished into another cloud and for the rest of the day we went about our work much moved by the wonder we had seen. 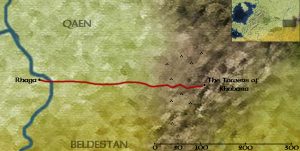 At the end of the seven-day journey I mentioned, the ground rises up, becoming dry and arid hills of rock and stunted plants where little grew or grazed. The hill country would be unremarkable but for the multitude of ruins scattered about. The locals say that long before the founding of Beldestan, a powerful dwarven kingdom flourished here. Wise in magic, art, and military might, this Trakhan Empire ruled the mountainous reaches that make up Beldestan’s northern border. Some calamity drove the dwarves from their deep holds and destroyed their cities leaving monster infested ruins. Adventurers in the area make a good living delving into these ruins to collect riches from the past; those who survive at any rate.

Today, the dwarf descendants of Trakhan live in one small city-state high in the steppes, flanked by towering mountain peaks. The Towers of Khubara is a mixed nation of dwarves, humans, and a scattering of other local races. The city of Khubara is formed primarily of tall towers, and indeed, those who dwell there take the height of their dwelling as a matter of pride and status. Bridges and walkways span the gaps between the towers, and it is said, a traveler can walk from one side of the city to another and never touch the ground.

The craftsmen here are quite skilled and produce many goods for trade with Beldestan and beyond. The swiftest falcons in the world are bred hereabout. Smaller than peregrine, they have red feathers on their breasts, and I can tell you that no bird can out-fly them, such is their incredible speed. Turquoise is found in great abundance in these mountains as are plentiful seams of iron, mithral, and a unique form of metal called ada, which is used to make wave-washed steel. As I understand it, iron, ada, and other natural ores are placed in a crucible along with finely chopped pieces of local wood and covered with the green leaves of the deadly crown flower. The resulting steel bears a beautiful wave like pattern in the metal. Adanisk (or wave-washed) weapons are light, incredibly flexible, and can be honed to razor sharpness.

I found the people of Khubara to be a solemn and quiet lot. This may be assumed to be the fault of their devotion to the Void and the gods who dwell in such dark places. Indeed, all of Beldestan seems to turn their prayers to Veles, Sabateus, Khorsa, and even to darker things still. While they claim this brings them salvation, I fear it does not but bring despair. I was quite happy to make my way from Khubara once we were resupplied and rested.

HP/inch 35; Hardness 15; Cost Adanisk weapons cost ×2 the price of normal masterwork items; Weight 2/3 normal; in the case of weapons, this lighter weight does not change a weapon’s size category or the ease with which it can be wielded (whether it is light, one-handed, or two-handed)

Adanisk is a very rare type of steel that has a unique wave-like pattern and is light, flexible, and very strong.

When crafted from iron, ada metal, and natural woods, wave-washed steel becomes a wonderful material from which to create beautiful weapons. Armor is almost never crafted from adanisk. Other items not primarily of metal are not meaningfully affected by being partially made of adanisk. (A longsword can be a wave-washed weapon, while a staff cannot.)

Adanisk weapons have a natural ability to bypass hardness when sundering weapons or attacking objects, ignoring hardness less than 10. Additionally, the metal is flexible and has a 20% chance of ignoring any sunder attempt made against it. Adanisk weapons count as cold iron and silver for the purpose of overcoming damage reduction.

Adanisk weapons cost ×2 the amount of the normal masterwork version of the item.

2 thoughts on “Midgard Expanded: The Travels of Lucano Volpe, or Cities in the Sky”