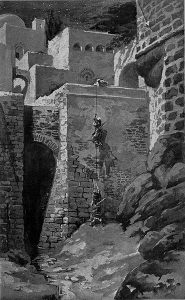 The nightmare lords of the forgotten depths typically grant mortals power for one of two reasons: some use mortals to weaken the surface world and thus prepare for an eventual takeover and others use mortals as proxies in the almost ceaseless wars they wage on each other.

As a dark pact hexblade, you learn to move like the skittering bugs and lizards of the underground. This swiftness and ability to come from an unexpected direction makes your attacks more lethal than others might suspect.

The great powers of the underworld have magic that weakens foes, like noxious gases that corrode opponents’ powers as acid dissolves rock. You can draw on the life of a dying foe to spread that weakness to others.

Soul Blight (Warlock Utility)
As one rival falls, weakness spreads to its allies.

Target: One enemy in burst.
Trigger: You reduce an enemy to 0 hp, or an enemy adjacent to you drops to 0 hp.
Effect: The target creature is weakened until the end of its next turn.
Special: You can only use this power once per round.

The blade of tormenting night is a gift from twisted subterranean lords. Made of a black, mirror-like metal, it is razor-sharp with curved and jagged edges, like chiseled obsidian. Short and quick, it scuttles through enemies’ defenses like a centipede darting underneath a log, finding weak points before striking home. Channels in the glassy metal seem to carry the blood of the Underdark, corrosive and sickly green. Through it, you can make the following two attacks.