Skip to content
Home / Delve into the Depths in the Kobold Blog / Book of Drakes: Put the Dragon Back In Your Dungeon 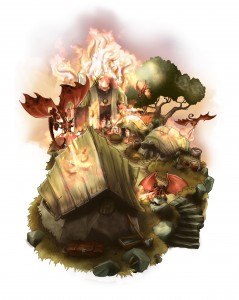 “Welcome, human, to my humble kobold bookshop! How may I serve you, O lord?”

“You wish to know about drakes? Woe is me! I have nothing about drakes. My wares are worthless! I shall set fire to my wretched excuse for a shop and hurl myself off the…what’s that? My cousin Jiro sent you?”

“Right. Follow me, then – make sure you duck when we go through the second doorway, and jump two feet straight up when we pass the barrel with the broken slat. I have just what you need: a book that contains all the secrets of our cousins in the dragon’s family tree…the legendary Book of Drakes itself!”

“Whoops. Did I say to jump two feet? I meant three. Ah well, I’m sure that’ll heal in no time.”

Nothing brings excitement to a game table like a slithering, hissing, glowing-eyed reptile crouched atop a pile of treasure. But if the PCs aren’t high-level enough to survive a face-to-face encounter with a dragon, adding dragons to an adventure can be a challenge.
No longer! With the Book of Drakes you can unleash the most iconic monster in fantasy roleplaying on your players today.

The Book of Drakes includes:


Whether you’re adventuring in Open Design’s world of Midgard or your own home setting, drakes provide unique adversaries, unusual companions, and compelling NPCs. Get the Book of Drakes today and bring on the dragons!

To whet your appetite, here’s one of our favorites: the Glass Drake (plus a special deal). 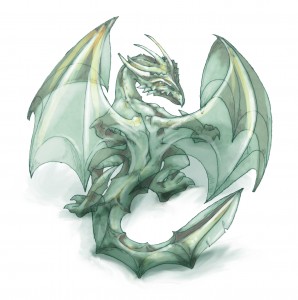 This tiny creature glints in the light like a delicate figurine of blown glass given life. A sinister look on its face, the creature takes flight on transparent wings.

Despite their size and delicate look, glass drakes are durable and vicious creatures prone to manipulation and cruelty. They prefer to make their homes in cities of industry and education where they can sell their services and information to artisans and those studying arcane arts. These drakes play on the perception of their fragile nature so others underestimate them. They often twist other’s words or blackmail people into service.

Glass drakes live extremely long lives. If they live to an old age without ever having used their reform ability, their appearance begins to change. The creature’s scales lose their luster and become cloudy. Their features begin to sag and lose definition. When glass drakes are killed and their reform ability draws their body back together, it revives their body to a prime young physique. Because of this, glass drakes aggressively throw themselves into fights, especially in isolated areas or their home den where it is less likely to have their shattered remains disturbed. Some glass drakes enter into murder pacts with one another, where they take turns destroying each other and looking after the remains while the creature reforms. These pacts allow the drakes to slow the passing of time on their bodies and also create a bond of friendship between the two drakes.

Since the glass drake’s method of reproduction involves the mixing of shards from two different drakes, this bond usually grows to include an immature glass drake, which almost immediately joins its parents on forays for the glass providing this drake’s primary food source.

Glass drakes measure just over 18 inches from their sculpted snout to their thin tail, and weigh about 15 pounds. Glass drakes’ scales are extremely smooth and their hide twists the light to make the creature seem almost translucent. This is most prevalent in the glass drake’s wings and connective folds of skin. The creature’s teeth are as clear as the rest of its body. Glass drakes are material drakes.

Want to see more drakes, large and small? Pick up the Book of Drakes today. The PDF version is just $4.95 for a very limited time!

16 thoughts on “Book of Drakes: Put the Dragon Back In Your Dungeon”