Skip to content
Home / Delve into the Depths in the Kobold Blog / Your Whispering Homunculus: All Smiles, Part Three 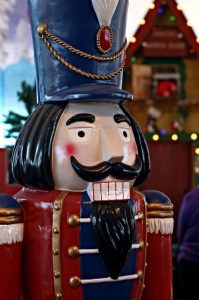 “Gah! He’s left one of those irksome snowmen outside, curse the man.”
“No master, I’m afraid that snowman is your Uncle Flobb.”

And so we come to the end of our suggested seasonal get-togethers. One final pair of events that may get everyone together in an uneasy way…

The Call for Help from an Enemy

You need to know your players well to try this one as you might be wasting your time before you start. For some groups this will work, for others it most assuredly will not.

Here, the PCs own foes are so scared witless, desperate, or subjugated that they seek the help of those they hate—but grudgingly admire.

The call for help does not necessarily have to be a call, of course. The PCs’ enemies (perhaps a tribe of gnolls, wicked ogres, or some other foe) could simply deliberately flee their own object of fear by passing straight through the PCs’ lands or past their homes to hopefully throw their enemies off their scent. A fleeing foe (particularly if it’s a tough one) is always a good attention grabber.

The enemy may be too powerful to simply escape, however, and the PCs’ own enemies might be desperate enough to seek help. They must be pretty distressed, of course, to get to this point; they can’t simply be scared—they’ve got to be scared out of their wits. A fear of becoming demonic after death, facing some appalling cataclysm (see also below for that route), or the loss of some great item or person or warping of body parts on a mass scale make good options to start with, but really, your options are pretty endless. (Even whilst writing this article, the author is thinking the threat of being turned inside-out en masse might make a pretty cool start point.)

You also need a good and sound logical reason for this fear, though. Urban settings lend themselves well to this sort of interaction—the humanoids/foes/enemies have fallen foul of some terrible plot that not only threatens them but the PCs—a plague, a summoning of a dark and terrible something (that has required the theft of an object or character sacred to the enemy), or some foul calamity brings the two usually opposing groups together. The true enemy has lairs both in an urban setting and the lands of the weaker enemies. The weaker enemies have, of course, already tried to overpower the lair in their own lands and failed, suggesting to them that the groups might need to work together to succeed. Perhaps the humanoid enemies (or whatever enemies you decide upon for your campaign) know the lair of their enemy is in an urban setting, but they have a sacred magic object that only works in their living hands; perhaps, they have some knowledge or language or code vital to success but need the PCs to get to their final goal.

Mixing humanoids in urban settings, encouraging interaction between opposing groups against a common goal in other locations, or introducing a very uneasy truce between foes to conquer a bigger foe gives you another option at your gaming table. Used sparingly, such adventures can be fun and really great to GM.

Bringing the PCs into a group of orcs, working with giants, or interacting with goblins allows you to have great fun with these humanoids’ mannerisms and the PCs’ interaction with them. What each group expects the other to like or do offers a rich vein of potential for strange adventures.

Having a true calamity affect your campaign is a last but deadly resort to throw a spanner into the works and forge the oddest alliances.

The calamity—fire, flood, pestilence, it’s up to you really—is guaranteed to bring out the best and worst in people. This calamity may be a direct result of events detailed immediately above or something entirely new and unexpected. Again, this works on the “enemy of my enemy” principal as outlined above, but now, it is a race against time. Is the PCs’ homeland and that of their sworn enemy falling apart, forcing an uneasy alliance to broker a solution similar to those outlined above? Do the PCs instigate the event this time—perhaps they need to enter a sacred ogre darkland kingdom and journey across it to succeed, having to convince ogres on the way that they are actually not the cause of the cataclysm but seeking to stop it? Does some foul traitor join them only to end the campaign seeking to kill the PCs anyway and to hell with the consequences if they die?

Thank you for your kind words and support throughout 2016, and keep an eye out for the whisperer in 2017!

2 thoughts on “Your Whispering Homunculus: All Smiles, Part Three”