Skip to content
Home / Delve into the Depths in the Kobold Blog / Midgard Notebook: Thoughts on the Midgard Races

The revised edition of the Midgard Campaign Setting is coming along nicely, and it’s time to talk about what’s new and what’s changed. This article is part of an occasional series on the process of refining and sharpening the setting to address its development since its first hardcover compilation.

One of the earliest decisions made in the rewrites was to revisit the core race mix. The 2012 edition of the Midgard hardcover features humans, dragonkin, dwarves, elves and elfmarked, gearforged, kobolds, and minotaurs as the 7 primary PC races, and certainly, those are all races with deep roots in Midgard play and lore. Centaurs, gnolls, gnomes, goblins, halflings, tengu/huginn and tieflings were listed as “minor races.” 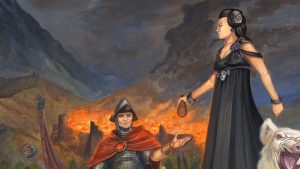 However, over time and in play, the balance has shifted, especially with the introduction of the Southlands as a more prominent region. We even considered adding jinnborn and lizardfolk to the options, but in the end, they just are too specific to fit very comfortably outside their homelands. At the same time, other quite prominent races might just not be needed all over the setting; for instance, the gearforged are played by an enthusiastic minority, but really, they’re linked almost entirely to Zobeck and the Seven Cities. At the same time, the shadow fey, the bearfolk, and the trollkin have arrived and all fill interesting niches based on adventures and story events. Where does this leave us?

At the moment, it leaves us with the gearforged shifting into a position as an important secondary race and with a new mix of 7 primaries: humans, dwarves, elfmarked, kobolds, minotaurs, ravenfolk, and trollkin are getting the main focus of attention in the revised edition as they represent the widest-ranging, most played, and most generally heroic races across the width and breadth of the setting. They are the most Midgard-y, if you will. They also lend themselves to a wide range of archetypes and play styles.

That doesn’t mean the minor races are forgotten by any means, just that they are less geographically dispersed, and I’ve been thinking of them as the “regional races” or “regional flavor” races. These 10 regional races are the bearfolk of the Northlands, centaurs from the Rothenian Plains, dhampirs and darakhul from the Blood Kingdom, dragonkin from the Dragon Empire, dust goblins from the West, gearforged from the Crossroads, gnolls from the Southlands and Plains, plus the Niemheim gnomes and the shadow fey from the Shadow Realm—all also worthy races. However, I think you’ll admit they are heavily identified with particular Midgard regions rather than wandering all over the setting. Rather than trying to make them too generic, we’re doubling down on them as exemplars of a particular part of the setting.

Halflings and tieflings are (for now) quite minor races indeed in Midgard; we don’t see any reason to provide a large chunk of Midgard-specific variants for them, though they obviously have lots of fans and remain totally playable in the setting as one-off characters. Lizard folk, jinnborn, lamia, tosculi, and other Southlands-centric races also fall into this category of playable but not requiring further expansion right away.

So there you have it, a high-level overview of some of the current design thinking behind our new player-centric races. I expect some cheers of joy and some gnashing of teeth as is always the way when a setting gets an update. Even knowing that, I hope you like this peek into the thought process going into the design. A poll is available below to see what you are playing or hoping to play in the revised Midgard Campaign Setting!

20 thoughts on “Midgard Notebook: Thoughts on the Midgard Races”