Skip to content
Home / Delve into the Depths in the Kobold Blog / Welcome to Midgard: Bearfolk 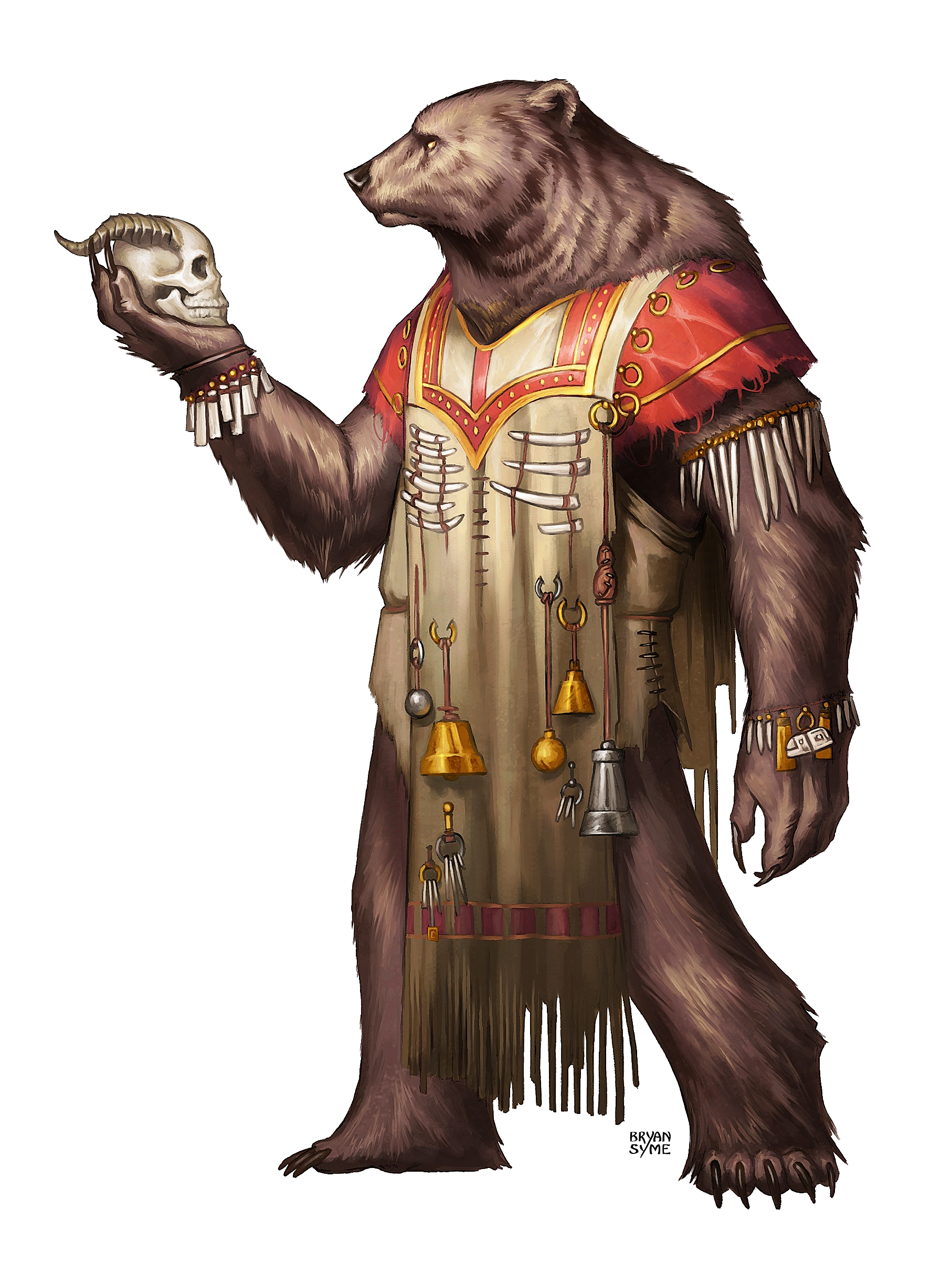 Bearfolk are massive people of iron resolve and deep nobility, resembling bears that walk upright rather than all fours. Hailing from either the cold climates of Midgard’s Northlands or from a nation of light carved out of the Shadow Realm itself, bearfolk put their trust in family and tribe to stand against the world. In defiance of their brutish appearance, they are deeply spiritual and artistic.

Bearfolk are broad-shouldered, bipedal humanoids. Although they strongly resemble upright bears, they have longer legs than any bear and their massive hands are more like a human’s hand than a bear’s paw. They lack the bear’s sharp claws, but they’re as dextrous as any human craftsman’s. Their muscles develop early in life, and most bearfolk look it. Their physiques tend toward great bulk beneath shaggy fur. Even the slenderest bearfolk are quite strong. Bearfolk are over 7 feet tall when they stand at their full height, but they often appear shorter because of a natural forward roll to their shoulders. They weigh between 250 and 350 pounds.

They’re covered in shaggy fur that can have a range of colors. The most common colors are black and brown, often with a lighter frosting or tip on the chest, shoulders, and upper back. Coppery red, honey-colored, and even pure white fur occur rarely. The color gives a clue to the particular bearfolk’s heritage, but it’s not an exact indicator. As they age, bearfolk tend to go silvery around the muzzle, giving them a distinguished look.

The core of bearfolk society is the immediate family. Parents care for their cubs until the young reach the age of 5 or 6 years, when a precocious shift takes over. Although they aren’t yet fully grown, the cubs are drawn by a powerful urge to explore. They begin spending time away from their family, treating their entire village (or smaller neighborhood in a larger settlement) as a sort of extended family. This can be surprising or even annoying for nonbearfolk neighbors, who might discover a bearfolk child rooting through their pantry for a snack, inviting itself to dinner, or even adopting them as its new family temporarily. This isn’t necessarily as inconvenient as it sounds, since young bearfolk are also more enthusiastic learners and harder workers around the house than most other children their age.

Beyond immediate family, the tribe forms the majority of bearfolk culture. Once bearfolk cubs start venturing beyond their own homes, families intertwine. Each cares for the cubs that happen by that day, welcoming the wayward children to meal tables as their own. There’s no choice but to know one’s neighbors in a bearfolk tribe, and that brings them all closer together. Trade apprenticeships and budding talents are identified early thanks to this intermingling, and it helps find a suitable niche for a young bearfolk’s path in life.

Elders are highly respected for their experience and greater perspective, but practicality carries weight as well. Being old doesn’t afford one unlimited leeway if one makes questionable decisions or has a reputation for foolishness. Building on this respect, bearfolk venerate their ancestors at a nearly demigod level and believe the spirits of their ancestors guide them. The tribe also holds druids and clerics (particularly those that serve nature deities) in high respect and looks to them for guidance.

When establishing homes, bearfolk gravitate toward striking a balance with nature and their impact on it. Even the most urban-minded of them prefer parks and greenery, and take pains not to disrupt the surrounding countryside any more than necessary. Where possible, they love to incorporate existing caves and rock formations into their architecture. Settlements always hold a totem, statue, or some other representation honoring an ancestor of virtue at their center.

The bearfolk place a high value on honesty, trust, hard work, and community. These are the virtues that bring a bearfolk honor, and the same attributes make an outsider welcome. Laws governing bearfolk life are simple and loose. They trust in their core values to guide them wisely when disputes arise. In the rare instance when a disagreement can’t be settled according to custom, honor, and common sense, the elders become involved. Defying the judgment of elders for personal gain is a source of great shame that can ruin a bearfolk in the eyes of his or her tribe and family.

Their intimidating mien is no veneer. Bearfolk have a deep and impressive capacity for violence when roused to anger or in defense of their own. Bearfolk passions run as strong as their bodies, and banter that pushes the boundary into insults and bruised honor often leads to more bruises. Their great physical strength means they excel at battle, and even relatively minor physical altercations can inadvertently become serious. Many bearfolk wear scars from physical contests, both simple competition and more serious matters of wounded honor, that went a little too far.

Thanks to their physical prowess, many bearfolk follow the path of the warrior. Barbarians and fighters are common, with rangers and druids following closely.

When bearfolk go to war, they do so with the clear goal of protecting their people in the moment and in the future. If that means the destruction of a foe, then so be it. They are adept at weaving their talents together in the same manner they blend families into tribes. Spellcasters favor turning the natural world against their foes with conjured beasts and manipulating battlefield conditions through weather, controlling plants, and even shaping the earth itself.

Bearfolk are given cub names by their parents, similar to names found throughout the Northlands. When a bearfolk comes of age, they earn a new name, either bestowed upon them by an elder or one they choose themselves. This name befits a deed undertaken during their rite of passage into adulthood, describes some honorable or prominent trait of the bearfolk in question, or honors an ancestor.

Your bearfolk character has certain characteristics in common with all other bearfolk.

Age. Bearfolk come of age in their late teens and live around 80 years.

Alignment. Bearfolk are predominantly good, mistrusting and shunning evil. While they hold rich traditions, they value their freedom and tend toward chaotic alignments.

Size. Bearfolk can reach a height of over 7 feet, with thick, muscular builds. Your size is Medium.

Speed. Your base walking speed is 30 feet.

Bite. Your powerful jaws are natural weapons, which you can use to make unarmed strikes. If it hits, you deal 1d6 + your Strength modifier piercing damage.

Natural Armor. Your hide is thick and tough, granting you a natural AC of 13 + your Dexterity modifier.

Powerful Build. You count as one size larger when determining your carrying capacity and the weight you can push, drag, or lift.

Ursine Talent. You have proficiency in the Athletics and Perception skills.

Languages. You can speak, read, and write Common, and either Northern (if you hail from Midgard) or Umbral (if native to the Moonlit Glades).

Subrace. Two main subraces of bearfolk exist in Midgard: grizzlehides and purifiers. Choose one of them.

As a grizzlehide bearfolk, you are thicker and hardier than your cousins. Grizzlehide fur ranges from black to golden, often with light gray or blonde tips. Tough and ferocious grizzlehides are the original bearfolk stock native to the colder northern climes of Midgard…

2 thoughts on “Welcome to Midgard: Bearfolk”