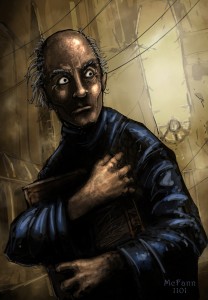 You spread the dogma of holy mania. Your god demands each sentient being sacrifice its mind to the infinite, black sea of the void—the true aspect of all deities. Those who follow you find solace in the sanity-crushing immensity of the gods. Those who oppose you experience the full force of the mind-blasting vistas that are reality’s true underpinning…

Raving Action (11th): When you spend an action point to take an extra action you can instead choose one opponent within 3 squares of you. That opponent is dazed until the start of its next turn.

Aberrant Strike (11th): When you hit with a melee attack against a target, that creature grants combat advantage to you and your allies until the end of your next turn.

Lunar light spreads from your palms, driving your foes to mindless violence.

Target: Each enemy in blast.

Attack: Wisdom vs. Will.

Hit: 2d6 + Wisdom modifier radiant damage, and each target makes a melee basic attack against a creature of your choice.

Special: If you score a critical hit with this power, the target gains a +2 power bonus to the melee basic attack it makes.

Your words inspire an ally to fight without fear.

You open a conduit to the howling gale of the plane of madness, buffeting the minds and bodies of your foes.

Daily • Divine, Fear, Implement, Psychic, Thunder
Standard Action                               Zone burst 4 within 10 squares
Target: All enemies in zone.
Attack: Wisdom vs. Will.
Hit: 2d10 + Wisdom modifier thunder damage, and each creature is pushed 2 squares.
Effect: The burst creates a zone considered difficult terrain. Creatures that enter or start their turn in the zone take 10 psychic damage and cannot use skills based on Intelligence, Wisdom, or Charisma. All other skills take a −4 penalty.
Sustain: Sustain the zone as a minor action.

Prerequisite: Any divine class, must worship a deity of the madness domain.
Benefit: You gain a +2 feat bonus to Insight checks.

When you use a power associated with this feat and hit an enemy with it, that enemy takes a −2 penalty to Will defense until the end of your next turn.

Prerequisite: Any divine class, must worship a deity of the madness or moon domain.
Benefit: You gain a +2 feat bonus to Arcana checks.

When you use a power associated with this feat, you can add the following to the power on a hit: the target is dazed until the end of your next turn.