What happens when adventurers 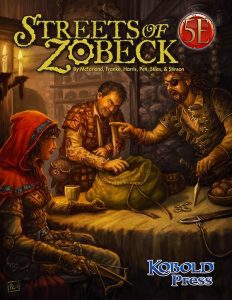 become the owners of a brothel? When a roguish associate asks them to attend an oligarch’s masquerade in his place? What lurks in the Cartways besides kobolds? And what will you say when another thief tells you the only way to find a treasure is to become hunted by the Praetors?

Streets of Zobeck is a 112-page supplement and adventure anthology set in the seedy underbelly of Zobeck, and on its mean streets you will find:

Get your hands dirty, and pick up your copy of the Streets of Zobeck now!

3 thoughts on “Streets of Zobeck for 5th Edition Now Available”