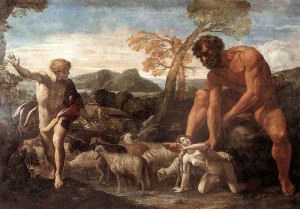 Born from the union of a human and an ogre, the half-ogre is a wretched unwanted creature hated by its parent races. Those born of human mothers frequently suffer the wrath of a community that hates it for its mother’s demise, for few human mothers survive the birth. Those born of an ogre mother bear instead the scorn of their tribe, for the young half-ogre cannot help but be the weakest of its peers…

Yet half-ogres, for all the scorn and ridicule they suffer, survive and even thrive. Lonely creatures, they find solace in the wild, more at home with the threat of the wilderness than under the watchful eyes of a city watch.

Play a half ogre if you want…

Average Height: 7’ 2” – 7’ 11”
Average Weight: 320 – 410 lbs.
Ability Scores: +3 Strength, +2 Constitution, -2 Intelligence (Yes, this is a penalty. Half-ogres are, as a rule, dumb as a stump, even those that choose the life of an adventurer.)
Size: Medium
Speed: 7
Vision: normal
Languages: Common, Giant
Skill Bonuses: +2 Endurance, +2 Nature
Door Opener: Any time you make a Strength-based ability check, you gain a +2 racial bonus to your die roll. (This bonus is not added to Strength-based skill checks.)
Ogre’s Hide: You gain a +1 bonus to AC and Fortitude defense.
Fury of the Wounded: You can use fury of the wounded as an encounter power.

As the blood flows from your body, the rage of your ogre ancestry fills you and you strike with savage fury against your enemy.

Towering hulks of muscle, half-ogres frequently reach a height of almost 8 ft., towering head and shoulders above their comrades… when they have comrades. Customarily lonely creatures, half-ogres take after neither parent strongly—their bulging muscles are strong only in comparison to their human parent; their intellect impaired, but far from the dim-wittedness of their ogre parent.

Thin, stringy hair crowns their heads, frequently thinning in males even in early adulthood and braided in females with bits of bone or feathers (or even beads for the civilized). Usually black though occasionally venturing into browns or even dull yellow, their hair frames faces marked by symmetry that could only come from their human ancestry, and eyes set deeply into the skull, tiny beady eyes that glint with a spark of wit that few true ogres could grasp. In some half-ogres, the eyes are pure white or black, lacking any other color, though normal human looking eyes predominate. A half-ogre’s tusks jut from their lower lip, curving out and upward, complemented by oversized and sharply pronounced incisors that together cause most half-ogres to stumble and lisp when they speak.

Their skin is rough and leathery, but also strangely greasy. Some trick of their mixed ancestry causes half-ogres to sweat profusely every moment of their lives, covering their skin, which ranges all the customary human colors and into the dull gray, yellows, and even greenish tinges of ogre flesh, with a slick of glistening grime.

Half-ogres can live to be as old as 150 years, though few reach such a venerable age. They enter adulthood at a mere 14 years of age.

To be a half-ogre is to live a lonely existence. Outcast by both ogre and human, few half-ogres find even the semblance of acceptance. In ogre communities, the half-ogre fails to measure up to even the weakest specimens of their parent race while human communities frequently cast out the half-breed into the wild to fend for themselves, unwilling to kill the creature but hoping it dies before it becomes a threat.

Half-ogres trust only rarely. Stronger than most of the common races, and blessed with formidable constitutions, these cast outs either die quickly or come to understand the wilds around them. Half-ogres find themselves torn, unaccepted by either parent race; they fight in the wilds a dual battle against their environment and themselves. Many fail in this battle. The clarion call of evil rings strong in the wild, promising companionship and the ability to let loose the reins that hold back a tempest of impulses to give in to gluttony, to evil, to a vile and rapacious beast that each half-ogre struggles to hold in check.

And yet some half-ogres resist that call. Prone to tumultuous mood swings and ruled by emotion rather than intellect, these more civilized half-ogres still find a place, if a grudging one, in society. Customarily quiet and hunched except when called upon to use their size, half-ogres act as caravan guards, bodyguards, mercenaries, and gladiators.

Half-ogres give their trust completely once earned, and never give up on a friend. Most come close to death many times before they reach adulthood, and they believe life must be experienced completely. They enjoy simple pleasures, sometimes to excess, though the particular pleasure varies widely—food, wine, and amorous company are all frequently sought after, but many half-ogres have a surprisingly expressive and artistic bent as well.

Half-ogres favor martial classes where they can fight eye to eye with the enemy, standing toe-to-toe as a fighter or slipping viciously into combat to strike deadly stealthy blows as a rogue, they find the simplicity of steel and blood attractive. Occasionally a half-ogre will find a divine calling, most commonly as a paladin. Some rare cases may seek out the call of the arcane, though even those rarely venture into the arcane practices of the scholarly wizard.

Prerequisite: Half-ogre
Benefit: While you are bloodied, you gain +1 feat bonus on attack and damage rolls with melee and thrown weapons.

Heart of the Mountain (Feat)

Prerequisite: Half-ogre, 11th level
Benefit: The bonuses granted by your ogre’s hide racial feature increase by one to +2 to AC and +2 to Fortitude defense.

Survival of the Fittest (Feat)

Prerequisite: Half-ogre, Constitution 15
Benefit: The first time you are bloodied in an encounter, you may spend a healing surge as an immediate reaction.

Prerequisite: Half-ogre, 21st level, fury of the wounded racial power
Benefit: The target of your fury of the wounded power changes from one enemy in burst to one, two, or three enemies in burst. You gain a +4 bonus on to hit and damage rolls against these targets until the end of the encounter.

The half-ogre presented focuses on Strength, creating characters ideally suited as damage dealers. An equally compelling half-ogre can be fashioned based on the ability to endure damage, an element of the half-ogre already seen here in the feats Heart of the Mountain and Survival of the Fittest. At the GM’s option, you may replace the fury of the wounded racial power with the earth’s heart power that follows.

You are the boulder, worn by the wind, and you let the attacks that assail you simply blow past, merely wind, having little effect.

Immediate Reaction Personal
Trigger: You suffer damage from an attack.
Requirement: You must be bloodied
Effect: You gain a +1 bonus to AC and Fortitude defenses until the end of the encounter. In addition, for as long as you remain bloodied, you gain regeneration 3.
Level 11—Regeneration 6
Level 21—Regeneration 9

Black Blood of the Earth (Feat)

Prerequisite: Half-ogre, 21st level, earth’s heart racial power
Benefit: You gain a +3 racial bonus on death saving throws. You can survive damage in the negative numbers up to your full hp total, rather than your bloodied value.