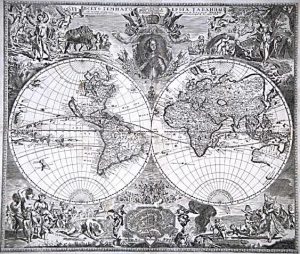 “The Last Map of the Cartomancer” presents a series of magical maps introduced through the escapades of Lan Su’Vavock and Kai Geyser, two sages on the trail of interconnected clues left behind by an ancient cartographer of legend.

“It most certainly is.”

“No, it’s a potion—and probably a dangerous one at that.” …

“Well I’ll certainly agree with that,” said Lan as he held up the stoppered flask with care, “but it’s also very much a map.”

“There must be a hundred potions here,” said the younger of the pair as he cast his gaze across the dilapidated alchemical shop, “what makes you think this one is what were looking for?”

“This!” Lan answered, wiping the dust off the glass container with the corner of his cloak.

Geyser looked closer. Within the flask, floating on the surface of the potion, was the faint illumination of a sigil. “The arcane mark of the Cartomancer!” he exclaimed, “But then where is the map? You don’t mean for us to drink…”

“I do” answered Lan with a smug satisfaction. “Or rather, more precisely, you.”

“Not a chance my friend. There’s no telling what’s in that liquid or what’s happened to it over the last hundred years. We’ll be smart about this—we’ll secret it back out through the catacombs, take it home, and have it analyzed.”

“There’s no time Geyser. The Abacane Guard will be upon us in minutes. When we’re arrested, I hardly suspect they will give us the luxury of retaining a priceless piece of magic. If we’re to have any chance of walking out of here with the map—it needs to be in your gullet.”

Kai Geyser knew Lan was right. There was only one passage out of the tunnels of the undercity through which they had trespassed to reach the hidden laboratory in the first place. But this was still an incredible leap of faith. He glanced at the barricade they had placed against the lab’s door. How much time would it buy them he wondered. But Kai still had one card left to play. “Then why don’t you drink it?” he protested.

“Ah!” said Lan, fully expecting the question. “Because it’s your turn of course.”

“Dammit!” Geyser knew that on that score Lan was simply correct. There was the small matter of Lan Su’Vavock’s recent plunge into the River of No Water in furtherance of their mutual escapade. “Hand it over,” he said with resignation.

Suddenly a series of loud crashes rang against the door. A cold voice demanded to be let in. Both immediately knew it was Commandron Gharen. His guard had arrived even sooner than expected.

“To your health then,” said Lan as he unstoppered the potion and passed it to Geyser. Lan then drew out a hip flask of his own to join Kai in their toast. A louder crash emanated from the door and the barricade began to buckle. Their pursuers were many now and they were getting organized—quickly.

“No,” said Geyser as he raised the potion high. “To the Cartomancer!”

And with that, Geyser turned the potion upside down and drained it in a single draught, fighting the urge to wretch.

A moment later, Geyser collapsed. As if in concert, the door flew open and the room began to fill with soldiers. With that same heartbeat, Lan raced to catch Geyser’s head to prevent it from dashing against the flagstones on the ground. The potion’s flask though was now nothing more than broken shards of glass splayed across the floor. If Su’Vavock’s hunch was wrong, their trail was now at an end.

“Su’Vavock,” sneered the lead guard. “Why am I not surprised to find you mucking about the undercity yet again.” Then, looking at Geyser moaning softly on the ground, he said “What is this? Are you now experimenting on your friends?”

“Ah Commandron! Thank goodness you are here,” answered Lan. “We seem to have gotten lost and stumbled into the catacombs a second time. Fraught with hunger my friend has fallen faint.”

Commandron Gharen ignored the obvious lie, gesturing to his men to bind the interlopers’ arms. Trespassing in the catacombs was strictly forbidden. “You embarrass yourself Su’Vavock. And the worst part is, whatever you were up to, the magistrate will probably let you off with another warning. You men of books let each other get away with anything in this city. If it were up to me, I’d have you both exiled for your mischief.”

Suddenly a weak voice spoke up from the ground below. It was Geyser: “You may get your wish Commandron.” Then slowly finding his voice he added, “I do believe Master Su’Vavock and I have plans to head north as soon as this misunderstanding can be sorted out—quite far north, in fact.”

Lan turned to Kai with a wide mouthed grin, even as his hands were suddenly tied taut behind his back. “North! Are you certain?”

As he struggled to find his feet, Geyser’s eyes darted back and forth like a mad man, as though he were reading something the others could not see—something inside his field of vision alone.

DESCRIPTION
This elixir imprints a detailed map inside the drinker’s field of vision. Only the imbiber can see the map and the map dissipates after 3d4 hours. While the map is in effect, the drinker knows the shortest path to any point on the map and has an innate sense for current position and direction. The superimposed map partially obscures the drinker’s ability to see beyond the map, imparting a -5 penalty to Perception checks and partial concealment to foes during combat.