Skip to content
Home / Delve into the Depths in the Kobold Blog / Under the City: Salon of Higher Studies

An arcane college offers endless opportunities to its students with its centuries of intellect suffused into its foundation and fortifying an arsenal of knowledge. But unlike most universities, this arcane college houses information not only above ground but also below in the depths of the under-city in a parallel institution with more sinister intent. The most salient differences between those who study within the college and those below it are simply how the students obtain their information and for what end.

Inside the college libraries, well-meaning students flock to towering shelves that line the walls from floor to ceiling, encompassing endless tomes in every subject from alchemy to ancient literature. Pensive learners thumb gently through well-worn texts in dappled sunlight, seeking greater insights of the world around them. For some students, however, this is simply not enough; too many questions arise and go unanswered in the confines of outdated texts and long seminars. Instead, they seek higher ground by travelling beneath the college and attempt to satiate their curiosity with Professor Mysh in his Salon of Higher Studies.

Mysh’s house of study sits directly beneath the library, housing a mockery of his neighbors above in a rotting cavity beneath the city as elusive as it is exclusive. Only those with truer ambitions are welcome in his lair: those who are eager to know how to sharpen psychological weapons, analyze ascensions to godhood, or divine new ways of suffering are privileged with his mastery. Unlike the neighboring master who teaches only by demonstration, Mysh’s pedagogy demands his students engage in endless research alongside him but doesn’t guarantee their success.

He hoards mountains of molding books that tower precariously over the students, deadly should they fall. Rat-chewed papers scatter the ground among the half-eaten rats caught in the act, and the half-living shells of Mysh’s students who subsist on such lucky catches lay among them. Furnished with only a squat table to house the depository for Mysh’s endless research, his entourage huddles around in dying candlelight; his best students bear skin as yellow as the pages they read and as thinly stretched as the leather bindings.

In the center of his Salon hangs an intricate but poorly kept incense lantern that pours a scarlet smoke over the floor of the room that lures his students toward it as they breathe in the irresistible power of fox’s cunning. It bears the same color as a dying rose and a sickly, bittersweet smell that only slightly masks the odors of long-neglected hygiene and decaying students whose scattered corpses lie unnoticed among their similar-looking counterparts. The enchanted smoke is the only invention in Mysh’s name that is truly his own. The drug possesses a mind-altering enchantment that enhances his students’ perceptive and intellectual abilities beyond human constraints. Instantaneous understanding of the most difficult concepts seep into his more advanced students as seamlessly as smoke, and they can read with as little effort as it takes them to breathe. He harvests their intellect from the comfort of his private den at the edge of his Salon, separated from his withering students by black lace hangings that guard his secrets.

Some, of course, are weaker to the drug; the withdrawals induce a suffocating paranoia of being trapped in a mind too small (among other tortures), and the depths of the addiction are far more crippling. Whether a student is weak from overexposure or inability to continue, the wise professor has just the antidote: he simply extracts their working mind and their memories from their bodies like a strand of spider’s web, which he tucks away in a petite vial he stores on an apothecary shelf in his veiled den behind his salon, and imbues a small piece of his own consciousness that he can control with just a glimmer of thought in his new assistant. With so many consciousnesses to keep track of, the white-haired mouse of a man speaks to himself in a hundred different hushed voices, some of which occasionally engage in visceral arguments that result in any array of tantrums or screams (which largely go unnoticed by his students). With another hit of his own cunning, he rises above the torture of his own intellect and resumes his work. 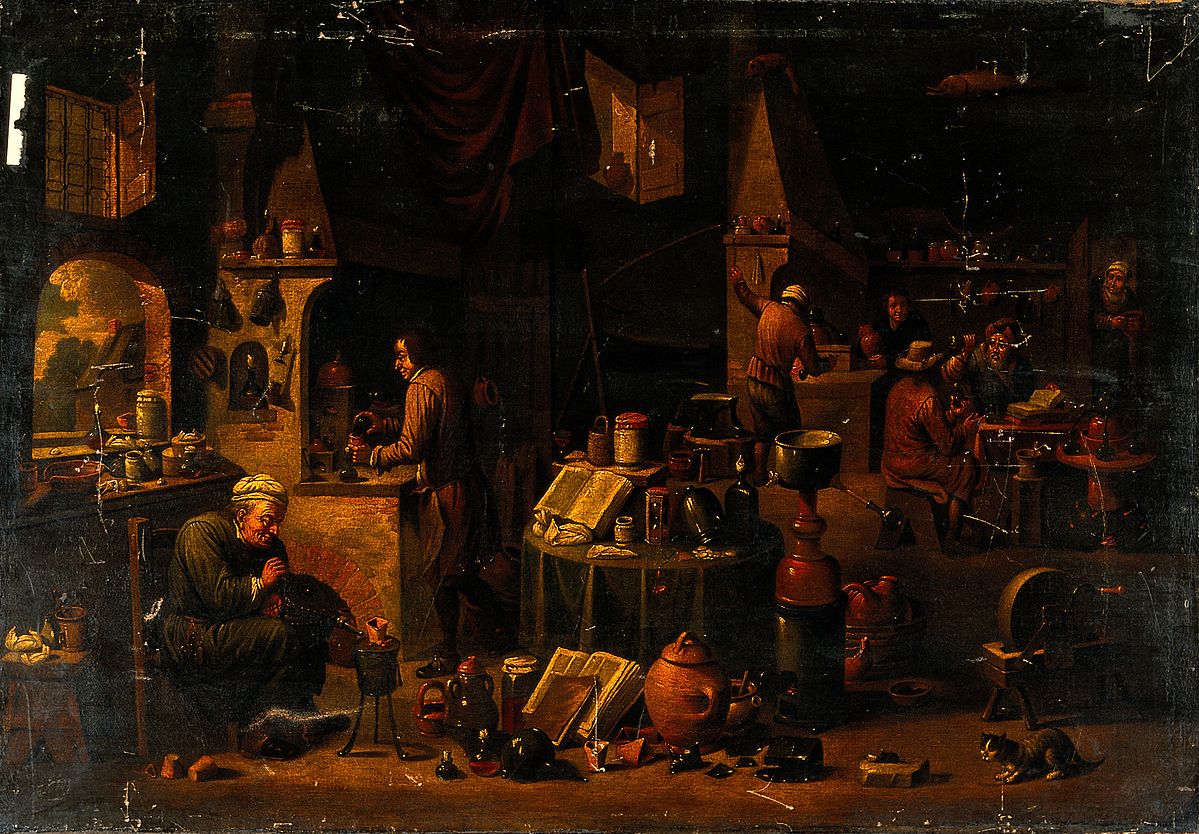 These assistants have some minor structural troubles, predominantly regarding physiological control. Where our subconscious restricts our tensile strength when we grip or bite into something, their loose consciousness strips away such inhibitions. So if the professor hands them an arm of a poorly performing student and says “bite,” then they, being well-behaved, proper aides, sink their teeth to the marrow without question or restraint. As such, the assistants are readily susceptible to breakage, resulting in a high turnover for this unwitting position. Once Mysh has depleted their useful life (or grows tired of them), he’ll grant them a new life as an experiment of the master or store them in his crypt, dead or alive, behind the black curtains in the salon for his own studious gain.

His current assistants, Sana and Graeme, are more nimble than his previous stock; though young in years spent on earth, their gaunt, yellow faces and dismal grey hair give them the appearance of living corpses from ages past, countered only by the swirling scarlet in their irises. And if you’re not careful, the professor may just send them to study you…

Gnome Cunning. Professor Mysh has advantage on all Intelligence, Wisdom, and Charisma saving throws against magic.

Spellcasting. Professor Mysh is a 9th-level spellcaster. His spellcasting ability is Intelligence (spell save DC 15, +7 to hit with spell attacks). He has the following wizard spells prepared:

Hollow mind. The hollowmind apprentice has advantage on saving throws against bring charmed or frightened, but disadvantage on Perception checks.

Spellcasting. The apprentice is a 4th-level spellcaster. Its spellcasting ability is Intelligence (spell save DC 12, +4 to hit with spell attacks).The apprentice has the following wizard spells prepared:

3 thoughts on “Under the City: Salon of Higher Studies”