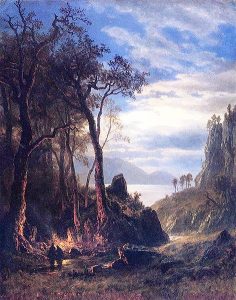 “The Last Map of the Cartomancer” presents a series of magical maps introduced through the escapades of Lan Su’Vavock and Kai Geyser, two sages on the trail of interconnected clues left behind by an ancient cartographer of legend. [Part 1]

“Well, we always knew this day would come. Like those who went searching before us, we’ve finally hit a dead end.”

The two sages huddled around their campfire, wrapped in their cloaks. Each slowly finished the last of their provisions in monotony, their respective moods matched by the perpetual grey of the morning sky. From time to time, as they had for several hours, they would take turns handing a twisted dead branch back and forth to one another, each analyzing it in turn, looking for anything they might have somehow missed…

“Four days now,” said Kai to no one in particular. “We’ve been out here in the middle-of-nowhere staring at this damned branch for four days. It’s time to accept that if this stick was ever a map, it’s not one now.”

“Maybe it’s missing a piece,” tried Lan. “What we’re looking at is just one branch of several. You’re positive nothing in the elixir map suggested additional pieces?”

“We’ve been through this Lan,” he said shaking his head with a dwindling reserve of patience. “We were lucky to have found this at all. Even if there are more pieces to it, we’ve come too late—they’re lost to time.”

“I must admit Kai,” said Lan with a smile, “I didn’t think you would actually go into the cave bear’s lair to get it.”

“And I didn’t think mama bear would come home quite so quickly,” he answered, stabbing the branch into the dirt for what felt like the hundredth time. “Well it’s not the first time we’ve followed the Cartomancer’s maps straight into madness…

Silence followed as Kai pulled the stick out of the ground and rolled it around in his hands, once more tracing his fingers across the all too familiar sigil of the mysterious Cartomancer. The design appeared to be carved into the branch by what looked like naturally occurring worm trails, but Kai knew better. It was the sign. This branch was a map. At least, it once was.

“… But I suppose it’s the last,” finished Kai. “We can return to our lives you know. You were a celebrated scholar before all of this Su’Vavock, and once we return home, you will be again.

Lan accepted the branch back yet again from Kai, watching him as Kai slowly stood and began to pack up their poor excuse for a camp. Despite his earlier admission, Lan was still in denial. He stared at the gnarled stick. It didn’t point anywhere. There was no trace of the tree from which it came. There was no hidden message in the worm trails. The worm trails might even be a miraculous coincidence. Maybe it was just a stick. Perhaps, they were so desperate to find the next map that they deluded themselves into believing that this simple branch was somehow the map they were searching for. Did they really think a map of the Cartomancer could survive 100 years of the elements—in a cave bear lair no less?

“We did make some good tales though, didn’t we?”

And with that, Lan tossed the stick into the fire and stood up from his seat, dusting himself off as though ready to leave.

“Hey!” yelled Kai. “What did you do that for? We could have at least kept that as a souvenir!”

A second later, Kai recovered from his surprise and leaned into the fire to recover the branch. The branch was dry though, and the flames had already begun to dance along its length. Lan though grabbed at Kai, catching his elbow to stop him before he caught fire to his cloak.

The smoke wafting off the branch was darker than expected—perhaps thicker as well.

“Let me get the pot then,” said Kai. “We can still douse it. If nothing else, I want that branch for my mantle.” But Lan ignored him. Instead, Su’Vavock unslung his scroll case from his shoulder, his favorite charcoal stick finding his hand.

A moment later, Geyser returned with the cooking pot, brimming with icy stream water. His jaw dropped. There, in the twisting choke of smoke, as clear as day, was a map.

And not just any map, but a map of three-dimensions. The black smoke had frozen in place, arranged into a precise topographical depiction of a cluster of mountains. Moments later, the smoke rearranged itself further, adding the rivers flowing between the foothills. While Su’Vavock sketched like a madman, Geyser watched in wonder: a tiny smoky figurine began to trace a path through the mountains displaying a route of travel through the treacherous passes.

“Could that crest be Trollrunner’s Peak?” The excitement in Kai’s voice was far from restrained.

“Aya,” nodded Lan without taking his eyes off his page. “If it’s not, I’m totally lost. We’ll only have one chance at this. I can’t pretend to know how long the map will last.”

When the smoke figurine finally reached the base of a sheltered cliff on the map, a tiny boulder moved aside and the two sages watched the figure descend below.

The smoke transformed again, this time showing a network of dozens of irregular tunnels, intertwining as they corkscrewed underground. Lan threw his first page aside and started a second page, sketching furiously as he tried to keep up.

“This is impossible! It’s too fast,” shouted Kai as he did his best to commit the moving images to memory.

“We must!” gritted Lan. “This is what we trained for.”

But Kai begged to differ. Instead, he hurled the contents of his pot at the fire. With a steaming hiss of protest, the fire went out. A moment later, the smoke map dissipated as quickly as it had formed.

This time it was Lan’s turn to be amazed by the impetuousness of his partner. It was a rare moment that stunned Su’Vavock into silence. His hands went limp, and his stick and scroll fell to the frozen ground.

Kai reached into the waterlogged coals and retrieved the half-burnt branch, still containing a semblance of the mark of the Cartomancer. “When we reach the cliff, we burn the rest of it. Perhaps, we even wait until after we’ve explored the tunnels for a time to orient ourselves.”

Lan caught his breath finally grasping what Kai had done. Kai’s quick thinking just might have saved their expedition from failure. “Brilliant Geyser,” admitted Lan. “Unless it only lights once, of course.”

“It’ll light again,” said Kai. Somehow he was sure of it. With a newfound confidence, he turned the subject to the sages’ future. “We’ll need to resupply before we can hope to get as far as Trollrunner’s Peak.”

Lan nodded in agreement. After four days of fruitless frustration, he found himself more than excited to break camp with a solid lead. He suddenly stopped himself; there was one more issue to resolve.

“I suppose though, Lan,” he began, “if there is to be another leg to this journey of ours, I owe it to you to report my recent suspicion.”

“I think someone has followed us here.”

DESCRIPTION
When burned, this simple branch creates a detailed three-dimensional map of solidified smoke as specified by the item’s creator. The map lasts for up to 10 minutes, whereupon the branch is consumed.