Skip to content
Home / Delve into the Depths in the Kobold Blog / Tome Unbound: Light Drake 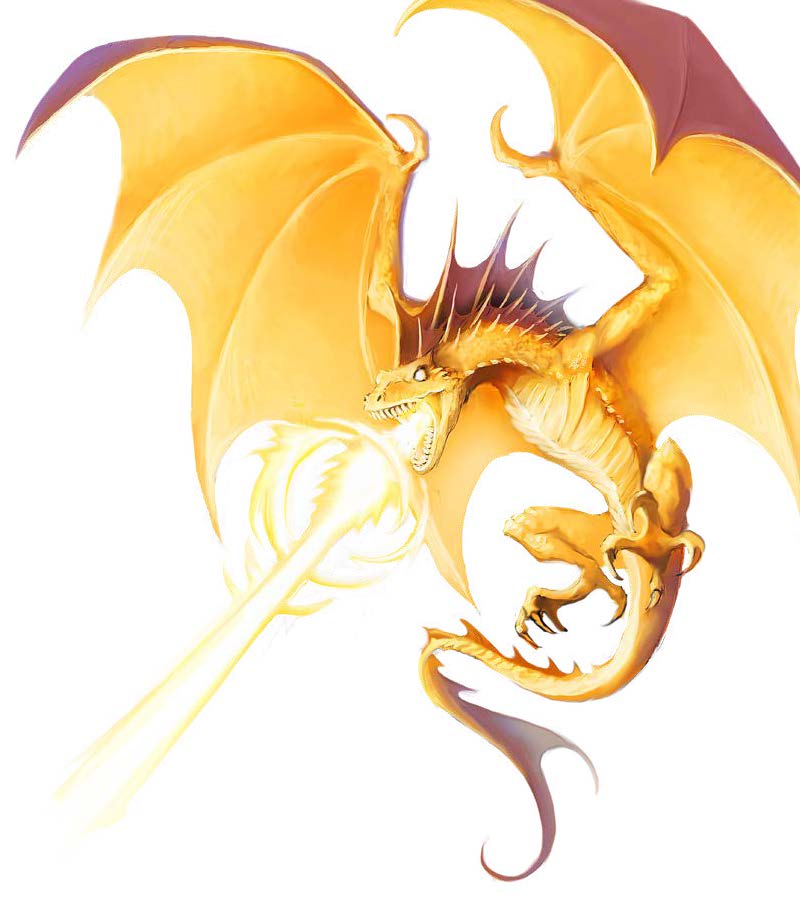 The following changes allow GMs to alter a light drake without modifying its challenge rating.

Light Form. As an action, a light drake can transform itself into pure light. In this form, it gains damage resistance to bludgeoning, piercing, and slashing damage from nonmagical attacks. It can also move through other creatures and objects as if they were difficult terrain, but it takes 5 (1d10) force damage if it ends its turn inside an object. Additionally, while in sunlight, the drake can take the Hide action as a bonus action. In this form, the drake cannot use its breath weapon, and its bite attack deals 4 (1d4 + 2) radiant damage on a hit.

Turn Undead (Recharge 6). As an action, a light drake can generate a flash of light that causes unease in undead. Each undead that can see the light drake and within 30 feet of the drake must make a DC 13 Wisdom saving throw. If the creature fails its saving throw, it is turned for 1 minute or until it takes any damage. A turned creature must spend its turns trying to move as far away from the drake as it can, and it can’t willingly move to a space within 30 feet of the drake. It also can’t take reactions. For its action, it can only use the Dash action or try to escape from an effect that prevents it from moving. If there’s nowhere to move, the creature can use the Dodge action.

Reflective Scales. When a light drake swarm is within 10 feet of a source of light, that source of light sheds bright and dim light for an additional 20 feet. While the swarm carries an object that sheds light from the daylight spell, the light within 20 feet of the swarm is sunlight.

Innate Spellcasting. The swarm’s innate spellcasting ability is Charisma (spell save DC 12, +4 to hit with spell attacks). The swarm can cast a spell as a bonus action, but doing so reduces its current hit points by 5. The swarm can use a bonus action to regain those lost hp. It can innately cast the following spells, requiring no material components:

Swarm. The swarm can occupy another creature’s space and vice versa, and the swarm can move through any opening large enough for a Tiny light drake. The swarm can’t regain hp or gain temporary hp (with the exception of their Innate Spellcasting).

Burst of Light (Recharge 6). A light drake swarm can release a ball of brilliant light in a 30-foot-radius burst centered on it. Each creature in that area must make a DC 13 Dexterity saving throw. On a failure, a creature takes 9 (2d8) radiant damage and is blinded for 1 minute. On a success, a creature takes half the damage and isn’t blinded. A blinded creature can make a DC 13 Constitution saving throw at the end of each of its turns, ending the effect on itself on a success.

The following magic items and spell are inspired by abilities possessed by a light drake.

This whip seems to have filaments of light interwoven within its strands. You gain a +1 bonus to attack and damage rolls made with this whip. A creature hit by this weapon takes an extra 1d4 radiant damage. When you roll a 20 on your attack roll with the whip, the target is blinded until the end of its next turn.

The whip has 3 charges, and it regains 1d3 expended charges daily at dawn or when exposed to a daylight spell for 1 minute. While wielding the whip, you can use a bonus action to expend 1 of its charges to attack all creatures in a 30-foot line with the whip. You make a single attack roll against all creatures in the area. If any of the creatures are undead, you have advantage on your attack roll.

When you are within range of a light source, that source of light sheds bright light and dim light for an additional 10 feet. If the object sheds light from the daylight spell, the light within 10 feet of the object is considered sunlight. If you move out of range of the light source, it immediately reverts to its normal illumination.

A ray of sunlight shoots out at a creature within range. Make a ranged spell attack against the target. On a hit, it takes 1d6 radiant damage, and it must succeed on a Constitution saving throw or become blinded until the end of its next turn.

I’ll be turning my attention to the newly released Tome of Beasts 2 in future installments. If you’ve got a favorite from that book, please let me know in the comments or elsewhere in the kobold warrens, and I’ll make sure to add it to the queue.

The Tome Unbound series fleshes out monsters from the Tome of Beasts 2, giving GMs ways to modify the existing monsters to surprise well-prepared players or to introduce monsters to a campaign.