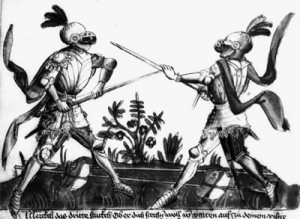 This terrible creature resembles an imposing knight wearing baroque full plate formed from some sort of calcified resin. Its helm is a blank gray oval without eye slots or mouthpiece, and it carries a glistening greatsword composed of dozens of slathering fanged mouths in its gauntleted hands.

Eaters of dust—or yakat-shi as they are sometimes called in ancient planar texts—are hideous mercenaries that roam the lower planes selling their services to arch-devils, demon lords, and other fiendish rulers for the chance to sample new flavors and devour interesting morsels. They can consume just about any substance with their horrible animate mawblades, including most gems and metals, but they prefer the flesh and souls of mortals to other forms of payment…

SPECIAL ABILITIES
Devour (Su) Any creature struck by an eater of dust’s mawblade suffers 1d4 Constitution and Strength damage as part of its essence is devoured (Fortitude DC 20; Charisma-based). On each successful attack, the eater of dust gains 10 temporary hp.

Mawblade (Su) A mawblade is a physical extension of the eater of dust’s body and is treated as an adamantine, cold iron, silver, and magic greatsword for the purposes of overcoming damage reduction and hardness. When wielding its mawblade, an eater of dust gains a +4 bonus to its CMD against disarm and sunder attempts (the bonus against sunder attempts stacks with the +2 bonus gained from the Improved Sunder feat).

An eater of dust always knows the location of its mawblade as if using the discern location spell.

Unending hunger (Su) An eater of dust can devour any substance with its mawblade, regardless of composition, and never get full. It can even gain nourishment from eating dust or soil (hence the name given to the race by various fiends). If an eater of dust’s mawblade is ever stolen, lost, or destroyed, it slowly starves to death.

Eaters of dust often converge in small but deadly military units led by a powerful leader with levels as barbarian or fighter. While many sages confuse them for some type of fiend, eaters of dust are actually aberrations originating from a far-flung dimension of madness and nightmares.

They take particular delight in shattering and feasting upon powerful magical weapons and armor, particularly intelligent or holy weapons, and charge recklessly into battle against opponents wielding such delicious viands. They are utterly without mercy and have nothing but contempt for most other life forms, attacking and eating their allies at the first sign of weakness.

An eater of dust resembles a powerful humanoid wearing a suit of full plate with a blank, full-face helm. A typical eater of dust is 7 ft. tall and weighs in excess of 350 lb. While an eater of dust cannot speak, it can telepathically communicate with almost any creature.

8 thoughts on “Eater of Dust (Yakat-Shi)”