Skip to content
Home / Delve into the Depths in the Kobold Blog / So You (Still) Want to Play in Midgard? Part One 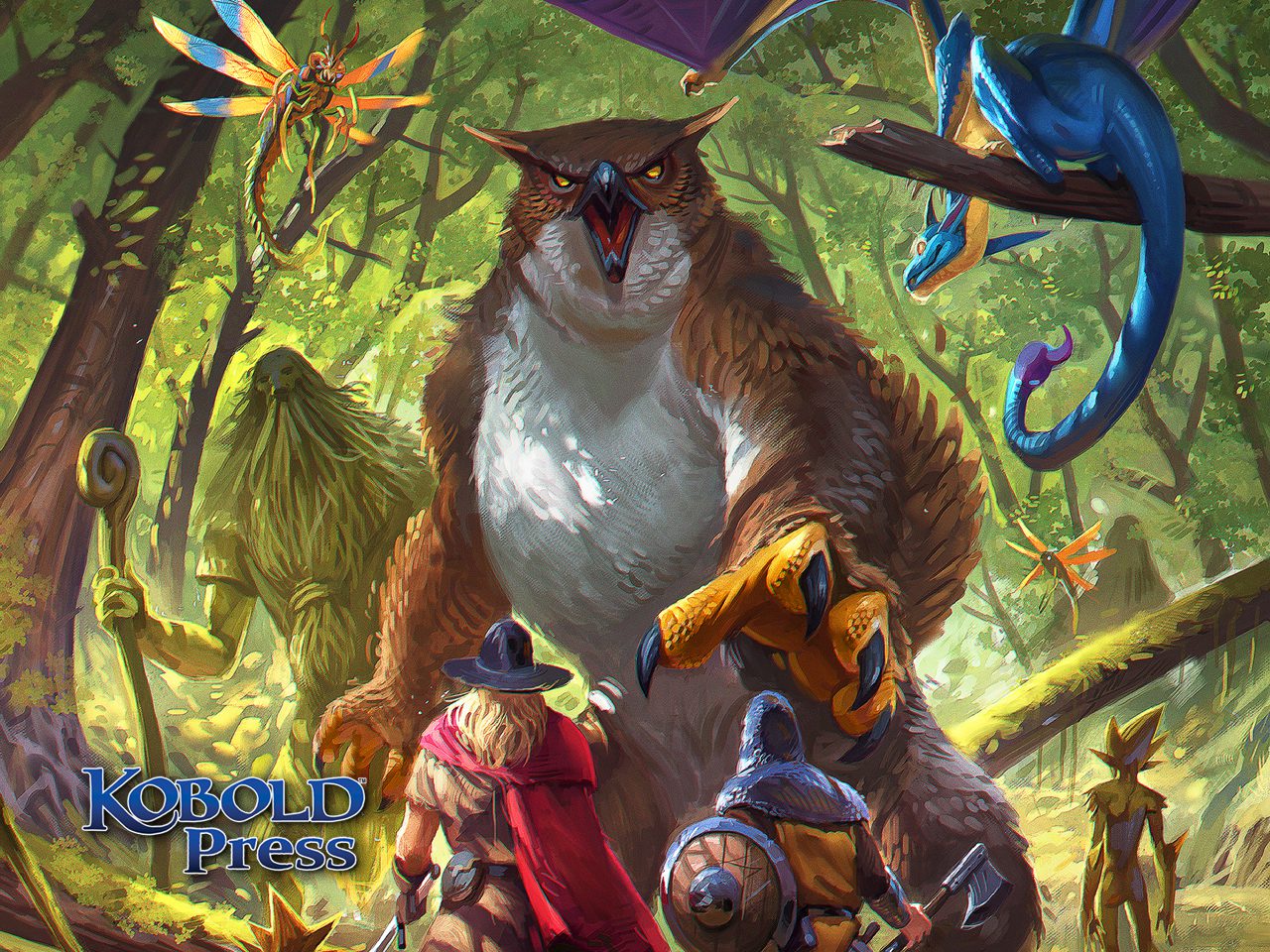 Back in the summer of 2019, I wrote an article entitled “So You Want to Play in Midgard? (But You Don’t Know Where to Start),” which discussed how to use the amazing resources of the Midgard Worldbook, the online and interactive Midgard Map, and the Midgard Adventures by Level and Location spreadsheet that I maintain to plot out several campaign arcs. But when I wrote the article, we had a mere 175 adventures for 5th Edition set in Midgard to choose from. Now we’re up to 223! Yup, 223 Midgard-specific 5E adventures taking place all over the map. Sounds like it’s time for an update!

And while we’re at it, I’m going to talk about how we can work in such wonderful resources as the Warlock Grimoire and Warlock Grimoire 2, the recently released Deep Magic sourcebook, several Warlock Patreon goodies, and other great kobold offerings to really flesh out our campaign—to really bring across the uniquely Midgardian aspects that distinguish this world from other campaign settings.

The result will be a 1st–10th level campaign arc. We’ll tackle half of it here, getting our PCs up to level 5, and then pick up in Part Two, taking them all the way to the campaign’s end at level 11. Ready? Here we go!

For starters, I’m going to go into the spreadsheet and sort by column E: Country. This gives me a list of adventures in the same general area (column D is too specific, column F too broad). Then I’m going to sort by column B, the minimum level, to order these areas by difficulty, and we’re off. Now, my advice to GMs is to use milestone leveling over experience points. This way, we can be assured our players are the right level for each adventure, and also, when we’ve got several very cool adventures of the same level that we want to run, we can run them all and don’t have to choose one over the other.

Our campaign is going to begin with “Hallow” from Tales of the Old Margreve. Why? Because you can’t go wrong with Richard Pett and because the Crossroads and the Margreve forest are good places to kick off with if we want to really communicate the feel of Midgard. “Hallow” is set in the village of Levoća in the Eastern Margreve, and it has a wonderful Grimm’s Fairy Tales vibe with wicker monstrosities and evil trees. After “Hallow,” let’s send our players heading to Zobeck. If they don’t have a reason to go there, perhaps Brother Arkadi at the chapel to Porevit and Yarila wants to send a message to the church in town, just letting his superiors know about the nightmare that just went down.

On the way, we’ll be running Jon Sawatsky’s “The Fingers of Derende,” also from Tales of the Old Margreve. It has a range of suggested levels, but we’re running it at level 2. We will use the hook that several woodcutters have been captured by the “family” of the adventure. This hook places their treetop fortress near Pilzfanger, a small hamlet north of Stefanstor, which, looking at the Midgard Map online, we see is near Five Wagon Oak where the river forks. It’s also about halfway between Levoća and Zobeck, so it’s a perfect waypoint for an adventure. Now, I’m going to want to work some Margreve-specific magic into our campaign, so in the treasure in the Starless Hall, I’m going to add a spellbook that they’ve come across in which I’ll place feed the forest, snap the leash, spy my shadow, and step like me, four very cool Margreve-specific spells.

Now we’ve reached Zobeck, the real heart of Midgard, and we want it to be special. So before we jump into an adventure, we’re going to take a page or several from the recently released Warlock Grimoire 2, namely the “Midsummer Fair Clockwork Companions” by Greg Marks. That’s right. Why have our players arrive on just any old day when they can arrive in time for the Midsummer Fair? We’ll play up the kobold citizenry, the gearforged, the Arcane Collegium, all the things that make Zobeck Zobeck. Make sure the players meet the crazy gnome Cisnac Cligiglam (from whom they can maybe buy an assassin snake or a watch owl) and visit the kobold Collective tent with its “Repairs Quick-Quick!” sign. And since it’s always good to seed things for later, find a way to introduce Polla Everforge, the blacksmith. There’s no reason she can’t be displaying wares at the Midsummer Fair too after all.

But while at the fair, our players hear that two folks from the Arcane Collegium are looking for adventurers. Interested parties are directed to inquire at the Hedgehog Tavern where we’ll meet Ovras and Friganis, a clockwork mage and a masterwork gear-grinder, who are looking to find their missing (and *spoiler* sadly dead) colleague, the clockwork mage Uvalius Odolin. Yes, we’re running R P Davis’s absolutely delightful “Death of a Mage” from Warlock Lairs (an adventure for five PCs of 3rd level). The missing Odolin was a clockwork mage and part-time lecturer at the Collegium, so we can throw in some clockwork magic alongside everything else in his house. His library has a spellbook and spell scrolls, but we’re going to ditch the scrolls and add spells to the book, all clockwork magic—let’s say analyze device, animate construct, armored heart, gear barrage, and gear shield. But going forward after this adventure, Ovras can become a source for additional clockwork spells, if not a reoccurring NPC we can fall back on later. Furthermore, the adventure ends with our players facing off against a geomancer named Shurnas Kradore, confronted in his lair in the Margreve. Among the many items of treasure the PCs may recover is his spellbook. My advice is to toss out all the spells in it and replace them with geomancy spells. Lots and lots of them. Right there, you’ve just introduced one of the coolest and most unique aspects of Midgard into your campaign. (If you don’t have a geomancer among your players, dropping an entire spellbook of geomancy magic into their lap is a surefire way to ensure that at least one of them takes the requisite feat!)

But there’s no rest for the wicked because, amidst the bustling festivities, our new acquaintance Polla Everforge has been kidnapped! We’ve got to follow the trail, which is going to lead us to Shawn Merwin’s “Lost Halls of Everforge” (Book of Lairs, still for 3rd-level characters). Now, we’ll set this in the Ironcrags, possibly in the Silbertal where we know there are some ruined dwarven holds. Anywhere in that general area. Polla has been abducted by a flame dragon who believes bathing in elemental fire will make them invincible and wants her to open a portal to the relevant elemental plane. Polla is said to be “skilled in elemental magic,” so let’s give her a few levels of wizard with the arcane tradition elementalist from Deep Magic. (If you’re worried about her being too powerful, maybe she didn’t have time to prepare any spells before she was kidnapped. It was the Midsummer Fair after all! Those dwarves can really tie one on!) But making her a wizard means that if she survives the adventure, we can throw in some elemental magic spell scrolls alongside her adamantine armor reward.

Now, if you have the Kickstarter exclusive, The Peculiar Alchemist of Alpentor by Wolfgang Baur & Celeste Conowitch, you can run that next for your now 4th-level characters. It’s set in the canton of St. Mischau, which is why we placed Everforge in Silbertal. Otherwise (or additionally), we’re going to run Jeff Lee’s 4th-level adventure “Tragedy at Thyrdun Outpost” from Tomb of Beasts II Lairs. This is set along the outer edge of the Ironcrags, either the northwestern border with Dornig or the western border with the Goblin Wastes. This is an adventure about helping a canton cleansing an abandoned mine of a horrid undead abomination. Fun!

And if we want to, we can set “Tragedy at Thyrdun Outpost” in Gunnacks, just so afterward, depending on how much time has passed and if it’s autumn yet, the grateful dwarves can invite our players to the Gunnacks Rites of Ninkash, a harvest celebration with beer, ale, bread, and fellowship. (See “Folkways of the Ironcrags” from Warlock Grimoire.) While we’re at the festival, let’s drop a few hints. Maybe a traveler from the Magdar Kingdom tells a story about a wizard named Goss who made a deal with a flame dragon or relates a tale of the fabled sunken treasure of Hammra Cistern. These are vague rumors and, it should be clear, big treasures for much more powerful adventurers. But you know what? Our traveler thinks there’s a way to locate one or both of these storied adventure sites, and that’s by asking a monolith who lives in the Ironcrags.

Yup, we’re going to run the 5th-level adventure, “Caverns of the Crystalline Monolith” (also by Jeff Lee and from the same book as our previous.) This is an exploration of a crystal cavern ending with an encounter with the crystalline fellow in question. The encounter doesn’t have to be hostile, and in fact, we’re going with the suggested “seeking knowledge” hook, but if we need further incentive, our PCs could be gathering spell components (possibly for Polla Everforge, in her efforts to get the Everforge back up and running, or possibly for Ovras the clockwork mage in Zobeck. My preference is to seed another adventure, so let’s have Polla, Ovras, or a new agent send the players to the caverns to ask about the location of a rare magic book that they need to locate. The cryptic answer to that question, should they receive it, will send them heading to Melana, capital city of the canton of the same name, with only a vague idea how to locate the book when they get here.

But that’s where we’ll stop for now. We’ve traveled from the Margreve and Zobeck to the Ironcrags, we’ve attended two regional festivals, we’ve fought a dragon wyrmling, and right here at the midpoint, we’ve spoken to the strange crystalline monolith. There are plenty more wonders and dangers ahead for our PCs, but that has to wait until next time!

4 thoughts on “So You (Still) Want to Play in Midgard? Part One”