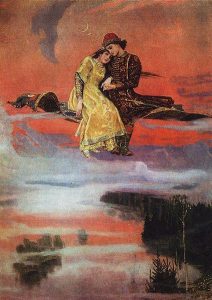 The oddly metallic red carpet shifts and rolls beneath the witch’s feet, carrying her forward amid the clattering of a thousand little legs. With gravity-defying precision, the beetles’ legs interlock and bend to form a crisply angled staircase.

A living carpet is found under the feet of fey spellcasters, who use this unusual mount to move with impunity through hazardous terrain. The beetles’ powerful legs interlock perfectly, allowing them to exert small amounts of force to create gravity-defying stairways, bridges, and paths. Alternately, they can crawl along the ground, bearing their rider forward on a red wave of skittering insects that gnaw on anything within reach.

Though a living carpet can neither speak nor understand any languages, its rider can give it precise telepathic commands while mounted…

Lore (Nature DC 14): This unusual mount is composed of feydawn beetles: benign fey creatures that can link their legs together to form small bridges.

Lore (Nature DC 19): Created by the will of a powerful fey, this creature is commanded through a psychic connection. If the current rider is slain, another fey spellcaster may master the creature for his or her own purposes.

Swarm Attack • Aura 1
The living carpet makes a swarm of mandibles attack as a free action against any enemy that starts its turn within the aura.

Telepathic Bond (mount)
Though a living carpet cannot speak or understand any language, its rider can give it precise mental commands while mounted. If the rider dismounts, the living carpet mindlessly follows its last command.

STANDARD ACTIONS
[m] Swarm of Mandibles • At-Will
Attack—Melee 1 (one creature); +11 vs. Reflex
Hit—1d6+1 damage, and the target is slowed until the end of the living carpet’s next turn.

TRIGGERED ACTIONS
Vermin Engineering (mount) • At-Will
Trigger—The living carpet has a friendly rider of 7th level or higher mounted on it.
Effect (Move Action)—When moving, a living carpet can fly up to its speed so long as it begins and ends its turn on solid ground.

Artillery and controllers benefit most from the living carpet since it allows them to move through complex terrain and punish melee combatants. The vermin engineering power lets the mount bridge any 2-square gap—ideal for scattered, narrow terrain that does not readily permit running jumps.

On the death of its creator, the living carpet goes berserk and attacks any living creature within sight. A spellcaster with the fey subtype can seize control of the carpet through a simple skill challenge, requiring 4 successes before 3 failures (Arcana DC 19; standard action; range 5).

Each individual beetle in a living carpet is a hexagonal red-carapaced insect the size of a human hand. In the wild, such beetles are skittish and benign, eating decaying organic matter and insect larvae. These creatures are common in the fey realms and rare elsewhere, and sages in the mortal realm catalogue them as “feydawn beetles.”

Feydawn beetles are formed into a living carpet by the will of a powerful fey creature with dominion over insects. The process requires an otherworldly ritual, which few spellcasters can emulate. At its completion, the ritual creates a subservient hive mind receptive to its creator’s will. Control is absolute, so the carpet can even be commanded to sit in a box for days at a time while awaiting use.

Due to their relatively slow speed, living carpets are often carried in a container during overland movement. One swarm weighs 20 lb. and fits into a small backpack, urn, or chest.

About The Author
Mario Podeschi is a full-time freelancer who produces web content, transcriptions, and game design. He maintains a blog and online resume at http://deepinsidejoke.blogspot.com.