Skip to content
Home / Delve into the Depths in the Kobold Blog / Tome of Beasts: Xhkarsh 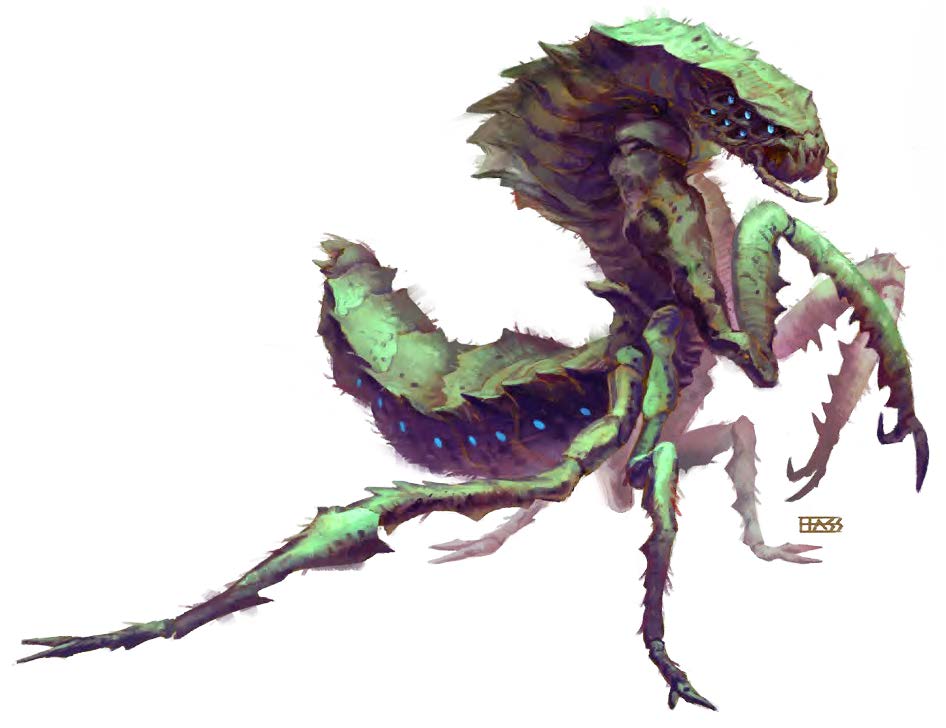 Watching with many rows of eyes, this mantis creature strikes with slashing claws and recurved barbs dripping with venom.

Dimensional Travelers. The clandestine xhkarsh are beings from another cosmic cycle. Their devices and armor are incomprehensible to—possibly even incompatible with— creatures of this reality.

Tamper with Fate. The xhkarsh utilize their fate-altering powers to distort personal histories and manipulate mortal destinies like puppeteers. By doing this, they realign the universe toward their own, esoteric ends—but what those ends might be, only the xhkarsh know.

Foes of Skein Witches. Skein witches and valkyries are perpetual enemies of the xhkarsh, whom they accuse of perverting the proper run of destiny for both great heroes and ordinary folk.

Stinger. Melee Weapon Attack: +8 to hit, reach 5 ft., one creature. Hit: 12 (2d6 + 5) piercing damage, and the target must succeed on a DC 15 Charisma saving throw or have its fate corrupted. A creature with corrupted fate has disadvantage on Charisma checks and Charisma saving throws, and it is immune to divination spells and to effects that sense emotions or read thoughts. The target’s fate can be restored by a dispel evil and good spell or comparable magic.

Seize Strand. The xhkarsh targets one creature within 5 feet of it whose fate has been corrupted. The target creature must succeed on a DC 15 Charisma saving throw or a portion of the xhkarsh’s consciousness inhabits its body. The target retains control of its body, but the xhkarsh can control its actions for 1 minute each day and can modify its memories as a bonus action (as if using the modify memory spell, DC 15). The target is unaware of the xhkarsh’s presence, but can make a DC 18 Wisdom (Insight) check once every 24 hours to notice the presence of the xhkarsh. This effect lasts until the xhkarsh ends it or the target’s fate is restored by a dispel evil and good spell or comparable magic. A creature becomes immune to this effect for 24 hours when it succeeds on the saving throw to resist the effect or after the effect ends on it for any reason. A single xhkarsh can seize up to four strands at the same time.

Invisibility. The xhkarsh turns invisible until it attacks or casts a spell, or until its concentration ends. Equipment the xhkarsh wears or carries becomes invisible with it.

2 thoughts on “Tome of Beasts: Xhkarsh”