Skip to content
Home / Delve into the Depths in the Kobold Blog / A Portrait of a Paragon: The Primal Dwarf 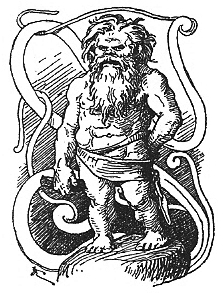 As one of the oldest races, dwarves are intimately familiar to experienced players. Even if you’ve never rolled a dwarf, you probably have a basic concept in mind when you think dwarf: a long beard, surly attitude, a love of hammers and axes, and a penchant for beer.

With the 4th edition introduction of the primal power source, we have several new and, at first glance, seemingly out-of-character options for dwarves. But looking deeper, we see that primal classes can fit dwarves just as naturally as a dank mine or a warm tankard of ale. The Child of the Mountain paragon path presents one option tailor-made for a dwarf shaman…

Child of the Mountain

The spirits of earth and stone surround us. We will not be broken.

Of all traits ascribed to the legendary dwarves, their connection to the mountain is paramount. While a dwarf warrior can be a force of destruction on the battlefield, in the mountains he is all but unstoppable. The history of the dwarves, like the history of the world, echoes across the highest peaks and resonates in the lowest mines and caves.

For many dwarves, this connection to the mountain runs deeper than mere familiarity. It is the spiritual force that drives their every thought and action. As a child of the craggy peaks and pitch-black caves, you can wield ancient spirits of the mountain to crush your enemies. You are the foundation that sustains your allies, and your presence grants them the resolve of bedrock.

Child of the Mountain Path Features

Aegis Action (11th level) When you spend an action point to take an extra action, you and allies adjacent to your spirit companion gain resist 5 to all damage until the end of your next turn.

Blessing of Stone (11th level) When you use your healing spirit power, the target also gains a power bonus to AC and Fortitude equal to your Constitution modifier until the end of your next turn.

Your spirit companion crashes into your foe, sending it sprawling. Its attempt to stand leaves it open to attack.
Encounter • Implement, Primal, Spirit
Standard Action; Melee Spirit 1
Target One creature
Attack Wisdom vs. Fortitude
Hit 2d10 + Wisdom modifier damage, and the target is knocked prone; if the target attempts to stand before the end of your next turn, one ally adjacent to your spirit companion may make a melee basic attack against it


Echoes of Stone (Child of the Mountain Utility 12)

Mountain spirits envelope you and your allies, giving you the ability to sense the unseen.
Daily • Primal
Effect Until the end of the encounter, you and allies adjacent to you or your your spirit companion gain tremorsense 5 as long as you are touching the ground

Spirits of an ancient crag erupt from the ground, rooting your enemies in place and granting your allies the steadfastness of granite.
Daily • Implement, Primal, Zone
Standard Action; Area burst 1 within 10 squares
Target Each enemy in burst
Attack Wisdom vs. Fortitude
Hit 2d10 + Wisdom modifier damage and the target is immobilized (save ends)
Effect The burst creates a zone of mountain spirits that lasts until the end of the encounter; while in the zone, allies gain a +2 bonus to AC, are immune to forced movement, and do not grant combat advantage; as a move action, you can move the zone 5 squares

6 thoughts on “A Portrait of a Paragon: The Primal Dwarf”