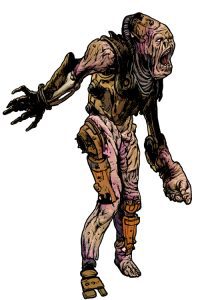 This week, we have another sneak peek thanks to the folks over at Creature Daily! Enter the clockwork dead. It’s undead. And a construct. The combination might give your adventurers something to think about. If you want to see more of the offerings at Creature Daily, head on over to the Creature Daily site!

This corpse moves erratically, and each step it takes is accompanied by spasms and twitching. Wearing what appears to be leather armor stitched into its skin, it has rotting flesh that is held together by a mixture of moving metal gears and strange tubes. The creature’s lower jaw has an amalgamation of grinding gears that drip a black fluid.

ECOLOGY
Environment any
Organization any
Treasure none

Gear Strikes (Ex) Whenever a clockwork dead takes a full attack action, it can make one additional slam attack at its highest base attack bonus.

Filth Burst (Ex) When a clockwork dead is destroyed, it explodes in a burst of gore-covered springs, gears, and other clockwork parts. All creatures adjacent to the clockwork dead take 3d6 damage and must make a Fortitude save (DC 12) or contract the disease filth fever.

Breath Weapon (Ex) Once every 1d4 rounds, a clockwork dead can cause the superheated fluid that lubricates its rotting body to spew forth from its mouth of spinning gears. This liquefied filth targets any creature in a 15-ft. cone. Any creatures caught in the attack take 3d4 fire damage and are allowed to make a Reflex saving throw for half damage. Once sprayed, this filth covers the ground and acts as the spell grease (DC 11) to any who enter or pass through the area.

The recent appearance of the clockwork dead is the realized dreams of foul necromancers and artificers alike.

While seeking a way to combine technology and magic, a number of members of various disciplines within a secretive guild created several failed prototypes before they finally discovered a way to fashion clockwork dead. Though none know what goal the guild sought to accomplish by creating these constructs, the creatures can serve different roles depending upon the needs of their owners.

The appearance of a clockwork dead might lead the common adventurer to assume that he or she faces nothing more than a strange variation of simple undead. This case of mistaken identity has been the career-ending error of many adventuring groups. Without knowing the exact nature of these organisms, confusion has caused many adventurers to waste spells and item charges as well as expend other combat-based abilities without any effect.

Clockwork dead have no mercy in combat. When in battle, it makes use of its powerful slam attacks against any who are unfortunate enough to become a target. The clockwork dead is not intelligent enough to make tactical choices in the use of its breath weapon, so it sprays the foul black liquid as often as it can. When a clockwork dead reaches 0 hit points, it explodes, sending a mixture of rotting flesh, gears, bone fragments, and other shrapnel flying at anyone unfortunate enough to be near the creature at the time of its demise.

Although the most commonly encountered clockwork dead are of the standard type presented above, others possess a variety of different traits. Some are customized with multiple arms or other elaborate clockwork grafts—only the creator’s imagination and wealth limits the potential options that such a construct might have. Clockwork dead are, for the most part, unthinking automatons, and they can do little more than follow a short list of orders. When left unattended and given no specific tasks, clockwork dead act much like common undead and mill about in search of living creatures to slaughter. Clockwork dead always follow their controller’s orders and have no regard for their own safety.

Since all clockworks need winding, it is not uncommon that clockwork dead are accompanied by a group of controllers who remain hidden until these creatures complete their tasks or are in need winding. If a clockwork dead is destroyed, those accompanying it collect the parts with the intention of using them in new constructs.

CONSTRUCTION
The creator of a clockwork dead must start with a fresh corpse and specialized clockwork pieces worth 425 gp. The price listed is for the animation of a full-sized adult corpse; this cost is halved if applied to a small creature such as a child.
CL 10th; Price 5,950 gp
Requirements Craft Construct, geas/quest, burning hands, creator must be at least caster level 10th; Skill Craft (clockwork) DC 18; Cost 3,425 gp

For more monsters to add to your campaign, explore the Creature Daily site!