Skip to content
Home / Delve into the Depths in the Kobold Blog / Tome of Beasts: Fext 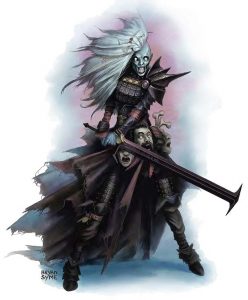 Undead Warlock Slaves. Ancient and powerful beings across the multiverse grant magical knowledge to mortals through dangerous pacts. Those bound to these pacts become warlocks, but the will and force of their patron is borne by more than just those who strike bargains for sorcerous power. A fext is a former warlock who has become wholly dedicated to their patron—mind, body, and soul—and functions as enforcer, bodyguard, and assassin. They are powerful undead slaves to the will of their otherworldly patron.

Linked to a Master. Each fext is a unique servant of their patron and exhibits the physical traits of its master. The eyes of every fext are tied directly to their patron’s mind, who can see what the fext sees at any time. The fext also possesses a telepathic link to its patron.

The process a warlock undergoes to become a fext is horrendous. The warlock is emptied of whatever morality and humanity he or she had as wine from a jug, and the patron imbues the empty vessel with its corruption and unearthly will. Whatever life the fext led before is completely gone. They exist only to serve.

Outdoing Rivals. Scholars have debated about how many fext a patron can command. The more powerful and well-established have at least 100, while others have only a handful. Where there is more than one fext, however, they maneuverings amongst themselves to curry favor with their powerful lord. Each fext is bound to obey commands, but they attempt to carry them out to the detriment of their competitors. Scheming is common and rampant among them and they try to work without the aid of other fext as much as possible.

Innate Spellcasting. The fext’s innate spellcasting ability is Charisma (spell save DC 15). It can innately cast the following spells, requiring no material components: