Skip to content
Home / Delve into the Depths in the Kobold Blog / Tome of Beasts: Rusalka 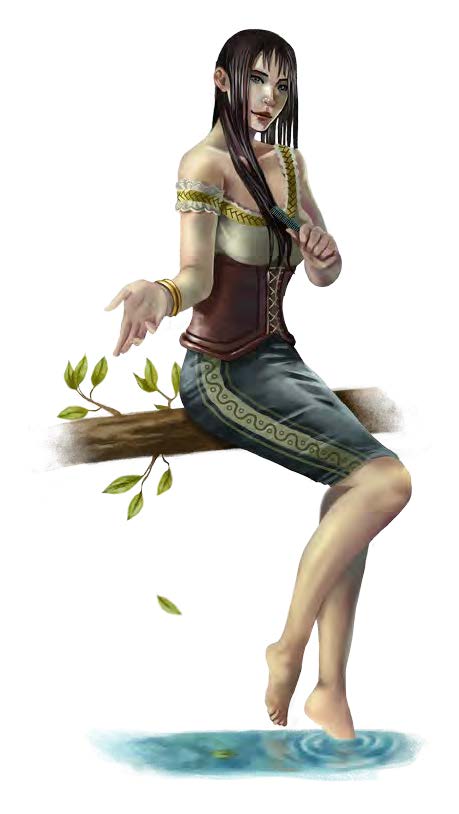 A barefoot woman with long hair and almost transparent skin sits upon a willow branch. Her hair and clothing are wet, as if she has just returned from a swim. Her smile seems friendly enough.

When a woman drowns, her dripping body may rise again as a rusalka. Some claim the drowning must be a suicide. Others say that the water itself must be tainted with murder or some great evil spirit.

Near Water. Rusalkas dwell in the water where they died, emerging only at night. Some climb a nearby tree, dangle their feet in the water, and sing alluring songs. Others sit on the bank, combing their wet tresses and awaiting prey. They must, however, remain in or near the water where they died, as part of their curse. However, during a full moon, the rusalki can leave the water to dance along the shore or the riverbank, singing all night long and inviting young men to join them.

Songs and Poetry. Rusalkas mesmerize and seduce passersby with song and dance and poetry. Young men are their usual victims, but they also prey on curious children, lonely older men, and other heartbroken women. When a potential victim comes near enough, the rusalki entangles the person with her hair and drags him or her beneath the water to drown.

Lover’s Walks. A rusalka cannot pass for human on any but the darkest night, but she might claim to be a lonely tree spirit or a benevolent nymph willing to grant a wish in exchange for a kiss. She may part the water of a lake and coax her victim toward the center with the promise of a kiss—delivered as her hair entraps the victim and the water rushes around him. Alternatively, she may use water walk so she and the victim can stroll across the surface of the water, reward him with a long kiss (to prevent him from catching a deep breath), then end the spell over deep water and drag him to the bottom.

Withered Tresses. If a rusalka is kept out of water for 24 consecutive hours, its hair and body dry into desiccated swamp weeds and the creature is utterly destroyed.

Innate Spellcasting. The rusalka’s innate casting ability is Charisma (spell save DC 15). She can innately cast the following spells, requiring no material components:

Watery Camouflage. In dim light or darkness, a rusalka that’s underwater is invisible.

Breathless Kiss. Melee Weapon Attack: +6 to hit, reach 5 ft., one target. Hit: the target is grappled (escape DC 13) and the rusalka draws all the air from the target’s lungs with a kiss. If the rusalka has movement remaining, she drags the grappled creature into deep water, where it begins suffocating.

Drowning Hair (1/Day). The rusalka’s long hair tangles around a creature the rusalka has grappled. The creature takes 33 (6d10) necrotic damage, or half damage with a successful DC 15 Constitution saving throw. In addition, until it escapes the rusalka’s grapple, it is restrained and has disadvantage on Strength checks to break free of the grapple.