Skip to content
Home / Delve into the Depths in the Kobold Blog / Tome of Beasts: Eonic Drifter 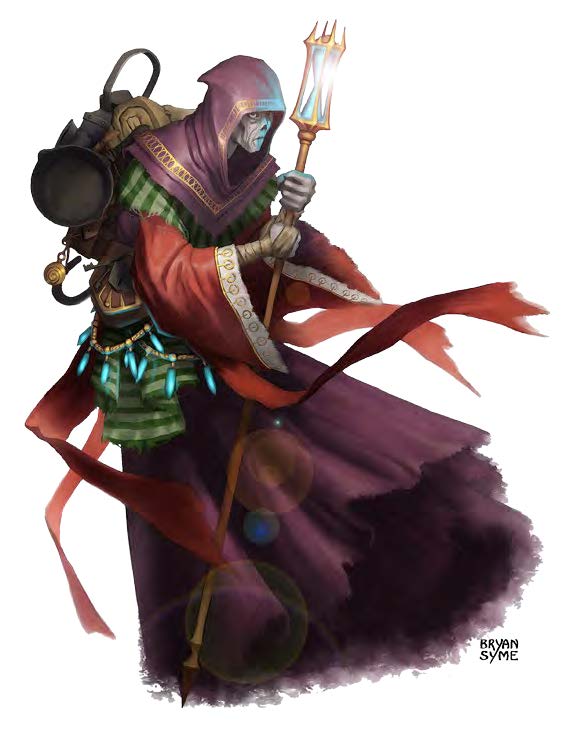 The air crackles and lights flicker in the ruins. In a whirl of colorful robes, the drifter materializes from the unfathomable maelstroms of time. His eyes scan the hall in panic, anticipating the terrible revelations of yet another era.

Adrift in Time. Not much is known about the time traveling eonic drifters other than that they left a dying civilization to look for help not available in their own age. To their misfortune, returning to their own time proved much more difficult than leaving it, so the eonic drifters found themselves adrift in the river of time. As the decades passed, their chance of returning home withered, along with the flesh of their bodies. They have been become mummified by the passing ages.

Crystal Belts. A drifter carries an odd assembly of gear gathered in countless centuries, proof of its tragic journey. The more eclectic the collection, the more jumps it has performed on its odyssey.

Belts of crystals around its body store the energy that fuels a drifter’s travels. After each large jump through time, the reservoirs are exhausted and can be used only for very short jumps.

Jittery and Paranoid. Visiting countless eras in which mankind has all but forgotten this once-great civilization has robbed most eonic drifters of their sanity. Their greatest fear is being robbed of their crystal belts. They plead or fight for them as if their lives depended on them—which, in a sense, they do.

Adventurers who convince a drifter of their good intentions may be asked for aid. In exchange, a drifter can offer long-lost artifacts gathered from many forays through time.

Drifters can appear at any time or place, but they often frequent the sites of their people’s past (or future) cities. There they are comforted by knowing that they’re at least in the right place, if not the right time.

Drift Forward (2/Day). The future self makes a time warping staff attack against a target. If the attack hits, instead of causing bludgeoning damage, both the target and the attacker jump forward through time, effectively ceasing to exist in the present time. They reappear in the same locations 1d4 rounds later, at the end of the present self’s turn. Creatures occupying those locations at that moment are pushed 5 feet in a direction of their own choosing. The target of the drift (but not the future self) must then make a DC 13 Wisdom saving throw, with effects identical to those for the eonic drifter witnessing the death of its future self (see Drift Backward). The future self doesn’t reappear after using this ability the second time; only the target of the drift reappears from the second use. This does not trigger a saving throw for the present self.