Skip to content
Home / Delve into the Depths in the Kobold Blog / Tome of Beasts: Oculo Swarm 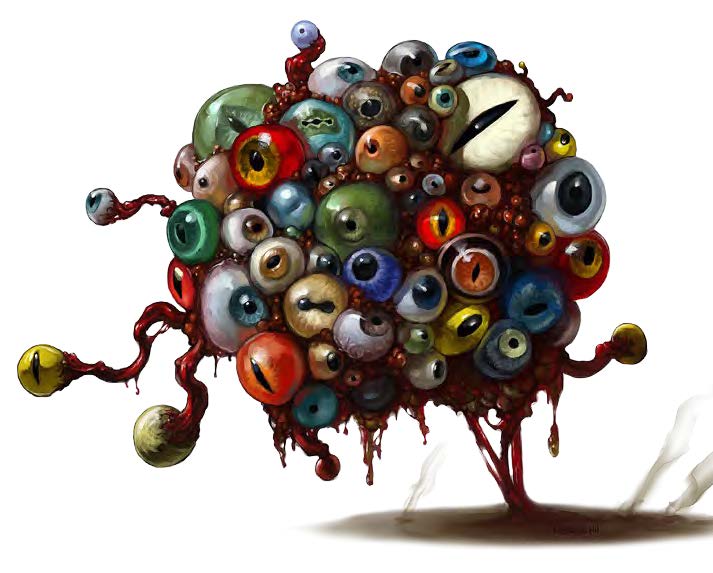 This collection of hundreds of eyes floats along, trailing ganglia and dripping caustic fluid that sizzles when it hits the ground.

Failed Experiment. An oculo swarm results from an experiment to create a live scrying sensor that went poorly. Once set loose, these horrors attain a form of distributed self‑awareness. Exactly what motivates them is unknown, except that they are driven to survive.

Flesh Stealers. A weakened oculo swarm can reinvigorate itself by tearing fresh eyes from almost any type of living creature. If a badly depleted oculus swarm escapes from battle—and they seldom fight to the death unless cornered—it attacks lone creatures or weak groups until the mass of gore-spattered eyeballs is replenished. The more dismembered eyeballs the swarm contains, the more powerful its paralyzing resonance field becomes.

Single Eye Scouts. The entire swarm sees what any single member sees. Before attacking or even entering a potentially dangerous area, individual eyes scout ahead for prospective victims or dangerous foes. A lone eye has no offensive capability and only 1 hp. It can travel only 100 feet away from the main swarm, and it must return to the swarm within an hour or it dies.

Eye Extraction. Every creature that occupies the same space as the swarm must succeed on a DC 13 Constitution saving throw or become temporarily blinded as their eyes strain from their sockets. This blindness lasts for as long as the affected creature remains in the same space as the oculus; it ends at the end of the blinded creature’s turn if the creature is out of the oculus’s space. Also, any cure spell cast on the blinded creature ends the temporary blindness, but not restoration spells. If a creature that’s already temporarily blinded is targeted again by eye extraction and fails the saving throw, that creature becomes permanently blind as its eyes are pulled from their sockets to join the swarm (causing 1d8 piercing damage). Success on either saving throw renders that creature immune to eye extraction for 24 hours (but it still doesn’t recover its sight until it gets out of the swarm). An oculo swarm with 50 or fewer hit points can’t use this ability.

Gaze (recharge 5–6). The swarm targets every creature in its space with a gaze attack. The swarm can choose one of two effects for the attack: confusion or hold person. Every target in the swarm’s space is affected unless it makes a successful DC 14 Charisma saving throw. Even creatures that avert their eyes or are blind can be affected by an oculus swarm’s gaze. The confusion or hold person effect lasts 1d4 rounds.

Bemmean wizards have been known to employ oculus swarms as lie detectors during negotiations. An oculus instinctively reads eye movements, and it can communicate what it sees to the wizard by moving in a specific way or by changing the color of its irises. If negotiations go poorly, the mage gives the swarm permission to add a fresh pair of eyes to its number.